Aman Hayer is a Punjabi Bhangra artist. He is known for his albums Reminisce & Groundshaker I & II.

Born in 1978 in Leamington Spa, he started his music career in the early 2000s, working on a number of artists albums including Amar Arshi's 'Dark Angel', Amar Group's 'Desi In Ya Face', and Saabs' 'First Contact'. 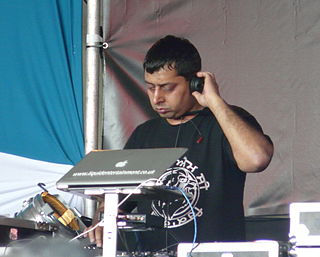 Rajinder Singh Rai, better known by his stage name Panjabi MC, is a British Indian recording artist, rapper, producer and DJ of Punjabi ethnicity. He is best known for the worldwide bhangra hit "Mundian To Bach Ke", which sold 10 million copies worldwide, making it one of the best-selling singles of all time. Among other songs, he gained acclaim with the 2003 release "Jogi". AllMusic has called him "one of the most prominent names in bhangra".

Rishpal Singh Rekhi, better known by his stage name Rishi Rich, is a British-Indian music producer based in London. He began his career in the Asian Underground scene and later became internationally known for his bhangra tracks, his Hindi remixes, and as a pioneer of Asian-R&B fusion music. 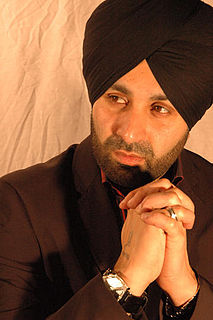 Sukshinder Shinda is a British-Indian playback singer-songwriter and bhangra Record producer from Handsworth in Birmingham, England. Since releasing his first professional recording in 1993, Dhol Beat Ek, Shinda has produced or collaborated on more than 200 albums, including all of Jazzy B's releases and the majority of Amrinder Gill's.

DEEP aka Deep Cold, Deep Da 1, was a Punjabi-American Southern rap artist from Houston, Texas. Raised in Houston, Deep Cold attended the same high school as Paul Wall and Chamillionaire. His first interest in music came at a young age when a tight family house hold income made him seek other avenues/interests. 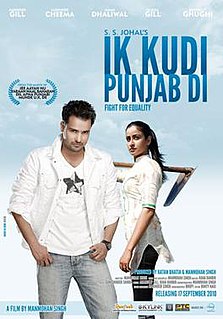 The UK Asian Music Awards, also known by the abbreviation UK AMA, was an awards show that was held annually in the United Kingdom from 2002 to 2012. The awards show has been produced and broadcast by B4U Music since 2008. Awards winners were decided by public voting at a website, from a list of nominees presented by the event organizers, except for the special category awards "Outstanding Achievement" and "Commitment to Scene" which are decided by the organizers. Desimag called the event "The most prestigious Asian music awards ceremony in the UK".

Sarbjit Cheema is an Indian-Canadian actor and singer who sings in Punjabi language.

Nachhatar Gill is a Punjabi musician and singer-songwriter. He was born to a Sikh family at their village Akaalgarh near Badesron, Tehsil Garhshankar, Punjab, India. Gill was very fond of music. His father was a kirtani. He used to sing along with his father at their village's temple's annual program. Gill got popularity with his solo song "Dil Ditta Nahin Si". His two religious albums are Sahib Jinah Diyan Mane (2006), and Ardaas Karaan (2010). He appeared in his first movie, Gal Sun Ho Gaya in 2012. He has appeared in three more films since then, the latest one being Jugaadi Dot Com in 2015.

Baljit Singh Padam, better known by his stage name Dr. Zeus, is a British Indian music composer, singer and music producer. He rose to fame in 2003 with his song "Kangna", which was voted the best song on BBC Asian Network in the same year. His other hits are "Don't Be Shy" and "Jugni Ji", which won the best single award in 2012. He has worked with singer Kanika Kapoor for the song "Jugni Ji" and with musician Jaz Dhami for the song "Zulfa". His song "Aag Ka Dariya" features on the Four Lions film soundtrack. A music video was also produced featuring Czech model Yana Gupta and singers Ravindra & DJ Shortie.

Harmanjit "Mickey" Singh is an American-Indian singer, songwriter, producer, dancer, model and actor. He gained widespread popularity through his first mixtape of Punjabi and English music, Mick's Tape. It was released for free download on July 22, 2013 and included the tracks Bad Girl, In Love and Rani Mehlan Di. His music combines American and Punjabi music, and epitomizes the Urban Desi genre; it has also been influenced by jazz.

Aman Hundal is an Indian actress and model known for her work in Punjabi-language music videos and films. She debuted in the music video Tera Time alongside Jass Bajwa and Chakvi Mandeer. She was first noticed for her appearance in Wakhra Swag with Navv Inder and rapper and singer Badshah. She debuted in films as the female lead in the feature film Dulla Bhatti alongside famous comedy genre actor Binnu Dhillon and Sardar Sohi.

Amar Sandhu is an American born Punjabi singer, songwriter, music composer and producer. He is best known for his unique Punjabi/English fusion sound and his 2015 Album "New Era", featuring hits such as "Rooftop Party", "Double Addi", and "Replaceable".

Bups Saggu is a British Bhangra DJ, music producer and singer based in Wolverhampton, England.