Born in Rochford, Essex, England, Tapping moved with her family to Ontario, Canada, when she was three years old. She attended North Toronto Collegiate Institute, where she excelled in Environmental Science and Drama. However, when she finished in 1984, she decided to focus her attention on Drama, attending the University of Windsor School of Dramatic Arts in Windsor, Ontario. [1] [2]

After graduation, Tapping continued to study Theatrical Arts while performing in several stage productions. She appeared in several television commercials and played a variety of roles in television and film productions, such as The Outer Limits and The X-Files . She also formed a comedy troupe, the "Random Acts", with collaborators Katherine Jackson and Anne Marie Kerr, in Toronto in the early 1990s. [3]

Tapping is best known for her portrayal of Samantha Carter in the science fiction television series Stargate SG-1 , which debuted in 1997. After SG-1 aired its final episode, Tapping reprised the role of Samantha Carter on Stargate Atlantis as the new commander of the Atlantis expedition. [4] In Season 5, however, Tapping's role on the show was reduced to that of "special guest-star" with only occasional appearances [5] because she chose to focus her attention on the development of a new series for Syfy called Sanctuary . The show expanded on an original series of eight webisodes released on the internet in 2007. The bulk of the scenery and characters were entirely green screen and CGI creations. Tapping served as both star and Executive Producer of the show.

Tapping was reportedly working with William Shatner on a 2011 animated webisode series "The Zenoids", written by Alan Dean Foster. Tapping and Shatner voice characters, and Tapping is Executive Producer. [6]

In 2007, she won a Canadian Comedy Award for Best Actress for her role in the short film Breakdown. [7]

On 18 September 2012, she was cast as an angel named Naomi on Season 8 of the TV series Supernatural . She was a recurring character who appeared in seven episodes. [8] She reprised the role in season 13's "Funeralia", nearly five years after the character's apparent death.

She was also named as ACTRA's 2015 Woman of the Year. ACTRA (Alliance of Canadian Cinema, Television and Radio Artists) is the national union of professional performers working in Canada.

Tapping's first directing experience was during the seventh season of Stargate SG-1 on an episode titled "Resurrection", written by co-star Michael Shanks. [9] She directed the seventh episode of Sanctuary season two titled "Veritas". [10] She has directed three episodes (6, 8 and 10) of Primeval: New World , three episodes (2.12; 3.06; 3.07) of Continuum , and four episodes (5, 6, 9 and 10) of Olympus and more recently directed episodes of Dark Matter , Van Helsing , The Magicians, and Supernatural, as well as the historical drama X Company She also directed 5 episodes (1.12; 2.4; 2.7; 2.8 and 2.9) of Netflix Original Show Travelers ; Tapping directed the season finale of the 2017 series Anne with an E . [11]

Tapping married Alan Kovacs in 1994. As of 2004, she lives with her husband in Vancouver, British Columbia. She has two living brothers, Richard and Christopher. A third brother, Steven, died in December 2006. [12] Tapping has one daughter, Olivia, born on 22 March 2005.

Tapping has won 6 awards, out of 13 nominations. 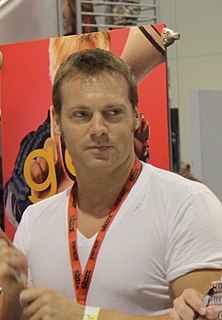 Stargate Atlantis is a Canadian-American adventure and military science fiction television series and part of MGM's Stargate franchise. The show was created by Brad Wright and Robert C. Cooper as a spin-off series of Stargate SG-1, which was created by Wright and Jonathan Glassner and was itself based on the feature film Stargate (1994). All five seasons of Stargate Atlantis were broadcast by the Sci-Fi Channel in the United States and The Movie Network in Canada. The show premiered on July 16, 2004; its final episode aired on January 9, 2009. The series was filmed in and around Vancouver, British Columbia, Canada. 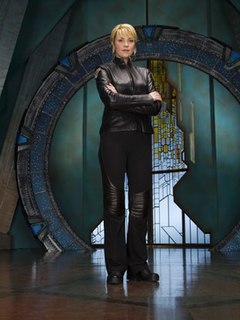 Samantha "Sam" Carter, USAF is a fictional character in the Canadian–American military science fiction Stargate franchise. Played by Amanda Tapping, she appears in all three shows in the franchise: Stargate SG-1, Stargate Atlantis, and Stargate Universe. She was a main character in all ten seasons of Stargate SG-1 (1997–2007). Following a recurring role in Stargate Atlantis for three seasons (2004–07), Carter became a main character in Season 4 of Atlantis (2007–08), and also appeared in the 2008 direct-to-DVD SG-1 films Stargate: The Ark of Truth and Stargate: Continuum. Amanda Tapping accepted a starring role in Sanctuary and appears in only the first and last episodes in Season 5 of Atlantis (2008–09). Carter also appears in two episodes of Season 1 of Stargate Universe. 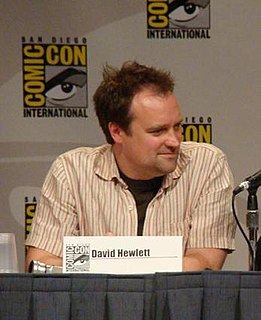 Dr. Elizabeth Weir is a fictional character in the Canadian-American Sci-Fi Channel television series Stargate Atlantis, a military science fiction show about a military team exploring another galaxy via a network of alien transportation devices. Elizabeth Weir is introduced as a recurring character in the Stargate SG-1 season seven two-parter, Lost City. She does not hold any military rank since she is a civilian. Weir is the leader of the Atlantis expedition in Stargate Atlantis until the last episode of season three, titled "First Strike". 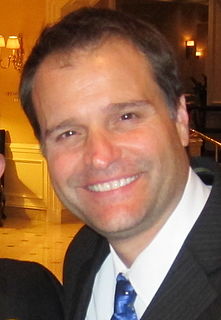 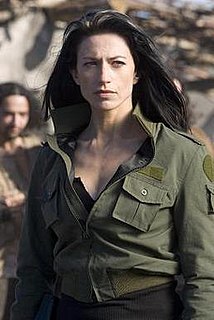 Vala Mal Doran is a fictional character in the American military science fiction television series Stargate SG-1, a science fiction show about a military team exploring the galaxy via a network of alien transportation devices. Played by former Farscape actress Claudia Black, Vala was created by Damian Kindler and Robert C. Cooper as a guest character for the season 8 episode "Prometheus Unbound" (2004). Because of the on-screen chemistry between Black's Vala and Michael Shanks' character Daniel Jackson, and the character's popularity with the producers and the audience, Claudia Black became a recurring guest star in season 9 (2005–2006) and joined the main cast in season 10 (2006–2007). 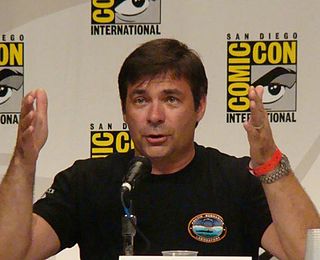 Martin Wood is a Canadian television director who has been directing since the mid-1990s. Specializing in science fiction, where he is best known for his work as a director and producer on Stargate SG-1, as well as its spin-off series Stargate Atlantis.

"Adrift" is the 61st episode and the fourth season premiere of the science fiction television series Stargate Atlantis. The episode first aired in the United States on September 28, 2007 on the Sci Fi Channel, and subsequently aired October 9 on Sky One in the United Kingdom. It was written by executive producer Martin Gero, and directed by Martin Wood. The episode continues from the third season finale "First Strike", where Atlantis drops out of hyperspace in the middle of deep space with 24 hours of power left after an Asuran attack. 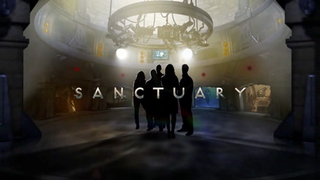 Sanctuary is a Canadian science fiction-fantasy television series, created by Damian Kindler and funded largely by the Beedie Development Group. The show ran for four seasons, from 2008 to 2011; a fifth season was planned but never made.

Christopher Heyerdahl is a Canadian actor who portrayed the Wraith Todd in Stargate Atlantis, Sam in Van Helsing and "Swede" in Hell on Wheels. 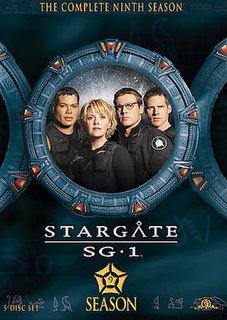 The ninth season of Stargate SG-1, an American-Canadian television series, began airing on July 15, 2005 on SCI FI. The ninth season concluded on March 10, 2006, after 20 episodes on the same channel. The series was originally developed by Brad Wright and Jonathan Glassner, and Brad Wright, Robert C. Cooper, Joseph Mallozzi and Paul Mullie served as executive producers. The season arc centers on the new threat of the Ori, a race who Daniel Jackson and Vala Mal Doran unleash in an unknown galaxy, and who are threatening to prepare for a crusade into the Milky Way galaxy to convert the beings to their religion called Origin. 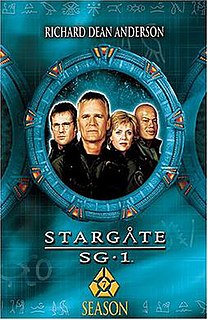 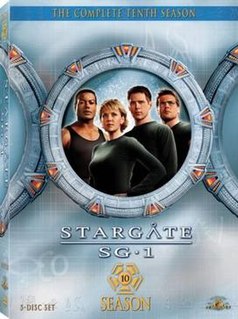 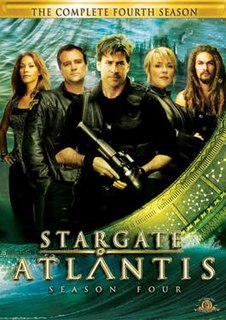 The fourth season of Stargate Atlantis, an American-Canadian television series, began airing on September 28, 2007 on the US-American Sci Fi Channel. The fourth season concluded after 20 episodes on March 7, 2008 on Sci Fi. The series was developed by Brad Wright and Robert C. Cooper, who also served as executive producers. Amanda Tapping joins the cast as a regular for 14 episodes, Jewel Staite was a recurring character for eleven episodes, while regular cast member Torri Higginson was a recurring cast member for four episodes. Other season four regular cast members include Joe Flanigan, David Hewlett, Rachel Luttrell and Jason Momoa. 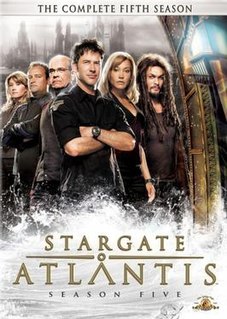 The fifth and final season of the military science fiction television series Stargate Atlantis commenced airing on the Sci Fi Channel in the United States on July 11, 2008, concluded on the same channel on January 9, 2009, and contained 20 episodes. The show itself is a spin off of its sister show, Stargate SG-1. The season upgrades previous supporting characters cast members such as Richard Woolsey and Jennifer Keller. Amanda Tapping's character Samantha Carter was downgraded to recurring character in this season. The fifth and final season is about a military-science expedition team fighting against the Wraith from their base of operation, Atlantis. The Wraith primary goal is to gather a fleet to invade Atlantis and find their new "feeding ground", Earth. 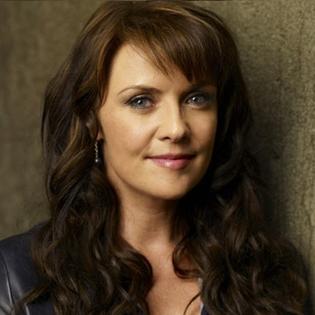 Dr. Helen Magnus is the series protagonist and central character of the Canadian fantasy-science fiction television series Sanctuary. She is portrayed by Amanda Tapping. In the series, Magnus is a biologist from Victorian era England, who currently runs the global Sanctuary Network, an organization tasked with finding a series of creatures called "abnormals", and later bring them to a Sanctuary base for refuge to protect them from the human population. The character is over two and a half centuries old, having been given her advanced longevity by injecting herself with vampire blood, as well as reliving the 20th century from time travel. After traveling back in time, Magnus had to avoid people so she isolated herself. In the season 4 finale "Sanctuary For None: Part 2" It was revealed that Magnus spent the 113 years creating a new Sanctuary. 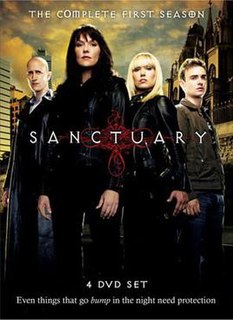 The first season of the Canadian science fiction–fantasy television series Sanctuary premiered on the Sci Fi Channel in the United States on October 3, 2008, and concluded on ITV4 in the United Kingdom on January 5, 2009, after 13 episodes. It follows the actions of a secret organization known as the Sanctuary, who track down a series of creatures known as abnormals, and then bring them to the Sanctuary for refuge. The main story arc of the season involves the Sanctuary working against the Cabal, an organization who seek to control all abnormals for their own gain. Amanda Tapping, Robin Dunne, Emilie Ullerup, and Christopher Heyerdahl are billed in the opening credits as the main cast.