Ammannur Madhava Chakyar (13 May 1917 – 2 July 2008) was a master of Kutiyattam, the classical Sanskrit theatrical form indigenous to Kerala. He is best known for taking the performances from the temple sanctuaries where they were formerly confined and making them public events. [1] 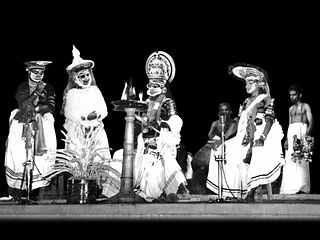 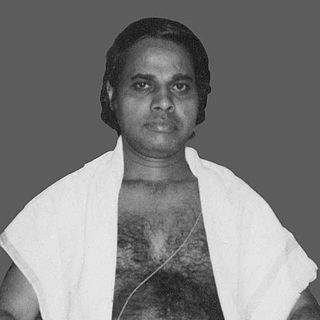 Mani Damodara Chakyar (1946–) is a Kutiyattam and Chakyar Koothu artist in Kerala state of south India. He is a nephew and disciple of legendary guru Nātyāchārya Vidūshakaratnam Padma Shri Māni Mādhava Chākyār. He belongs to the great Mani Chakyar tradition of Koodiyattam and Chakyar koothu. 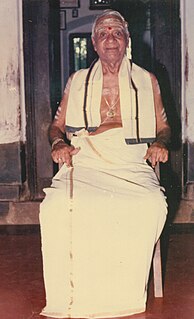 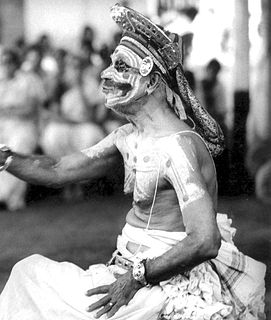 Chakyar Koothu is a performance art from Kerala, India. It is primarily a type of highly refined monologue where the performer narrates episodes from Hindu epics and stories from the Puranas. Sometimes, however, it is also a traditional equivalent of the modern stand-up comedy act, incorporating commentary on current socio-political events.

Chakyar is an intermediate priestly caste coming under the Ambalavasi community of Hindus in the Kerala state of India. The women in this caste are called Illotammas.

Nātyakalpadrumam is a book written by (late) Nātyāchārya Vidūshakaratnam Padma Shri GuruMāni Mādhava Chākyār about all aspects of ancient Sanskrit drama theatre tradition of Kerala- Kutiyattam. It was first published in Malayalam (1975) by Kerala Kalamandalam, with financial assistance of Sangeet Natak Academi, New Delhi. This monumental work serves as the reference to scholars and students. The entire book is written in the old Sanskrit text style closely following Nātyaśāstra. Both structure and content of the book illustrates the excellence of the author in both Sanskrit and Nātyaśāstra. It has received the prestigious Kerala Sahitya Academy Award for the year 1975. The book has been translated and published in Hindi by Sangeet Natak Akademi, New Delhi. 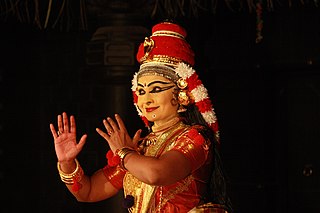 Nangiar koothu or Nangyar Koothu is an allied traditional art of Kutiyattam, an age-old Sanskrit drama tradition of India. It is performed traditionally by the women of the Ambalavasi Nambiar community of Kerala, known as Nangyaramma, but since the second half of the 20th century it's no longer the case. 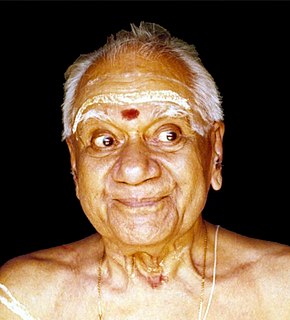 Manifestations of Shiva is a 1980 documentary film (90-minute) about the Hindu god Shiva's worship. It carries the performance aspects of Shiva-worship through dance, performing art, visual art and music. The film is directed by Malcolm Leigh and main casting is done by the legendary Kutiyattam artist and authority of Abhinaya and Natya Shastra scholar - Nātyāchārya Guru Māni Mādhava Chākyār.

Mani Madhaveeyam is a biographical book written on the life of Guru Māni Mādhava Chākyār (1989-1991), who was the greatest Kutiyattam-Chakyar Koothu exponent and Rasa-abhinaya maestro of modern times. The book is published by the Department of Cultural Affairs of Government of Kerala, India on May 1991. The author of the book is Das Bhargavinilayam 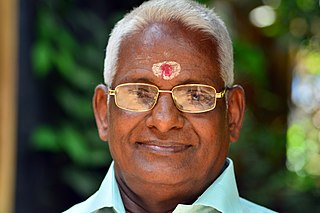 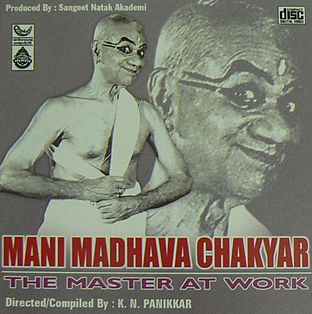 Mani Madhava Chakyar: The Master at Work is a 1994 biographical film on the life and work of Māni Mādhava Chākyār, maestro of Kutiyattam. The film is directed by Kavalam Narayana Panicker and produced by Sangeet Natak Akademi, New Delhi. 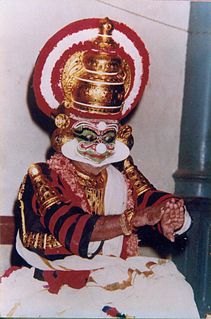 Kamlesh Dutt Tripathi is an Indian theatre personality and professor emeritus of BHU Varanasi. His interest and expertise spreads from Kutiyattam tradition to Ankiya Nat of Assam, aesthetics. He has contributed to the contemporary practice of classical Sanskrit texts in his tenure as the Chairman of Kalidasa Academy Ujjain. He had associated with Natyasastra scholar and Kutiyattam actor Natyacharya Mani Madhava Chakyar. He was instrumental in understanding and performing the plays by Kalidasa and Bhasa. His writings and translations into Hindi of plays like Balacharita were important in understanding the dramaturgy of Bhasa in the modern context.

Kapila Venu is a practitioner of Kutiyattam and a disciple of the Kutiyattam maestro Guru Ammannur Madhava Chakyar. She is being mentored by Kutiyattam exponent and actor trainer Gopalan Nair Venu, also known as G Venu, who is also her father. She has also trained under Usha Nangiar and Kitangur C N Rama Chakyar in Kutiyattam, Nirmala Paniker, her mother, in Mohiniyattam and studied under the guidance of Japanese Farmer/Dancer Min Tanaka in Japan.

Ammannur Rajaneesh Chakyar is a Kutiyattam artist from Thrissur, Kerala, India. He was trained under Dr. Ammannur Madhava Chakyar.

Paanivadathilakan P. K. Narayanan Nambiar is an Indian musician, known for his virtuosity in Mizhavu, a traditional percussion instrument and his scholarship in the art of Koodiyattom. He is considered to be one of the masters of Koodiyattom. In 2008, he was awarded Padmashri by Government of India for his services to the art.

Moozhikkulam Kochukuttan Chakyar (1928–2009) was an exponent of Koodiyattam, a traditional form of Sanskrit theatre from Kerala, which has been recognised by UNESCO as an Oral and Intangible Heritage of Mankind. Born in a family of Koodiyattam performers, in 1928, at Ammannur, a small hamlet near Irinjalakuda, in Thrissur district in the south Indian state of Kerala, Chakyar had his early training in the art form from within his family. Ammannur Madhava Chakyar, a renowned Koodiyattam performer and a Padmabhushan awardee, was his cousin and the two, later, would evolve a new school of performance, popularly known as the Ammannur tradition of Koodiyattam. When Margi, an institution promoting traditional art forms of Kerala, started their Koodiyattam training centre in 1981, he was the first residential guru. The institution imparted training to many aspiring performers which included two sons of Chakyar, Margi Sajeev Narayana Chakiar and Margi Madhu and both of them are known exponents of the art form. In 1998, Chakyar joined Nepathya, a centre for excellence in Kudiyattam, as the Mukhya Acharya, and continued his association with the institution till his last. The Government of India awarded him the fourth highest civilian honour of the Padma Shri, in 2008, for his contributions to Arts. He died in 2009, at the age of 81. He is remembered by an annual festival, Guru Moozhikkulam Kochukuttan Chakyar Memorial Kutiyttam Festival, at Moozhikkulam, a suburb of Kochi where Nepathya is headquartered in, and through orations organised by Nepathya.