Last updated July 10, 2019
Not to be confused with the Amundsen Gulf.

Amundsen Bay, also known as Ice Bay, is a long embayment 39 kilometres (24 mi) wide, close west of the Tula Mountains in Enderby Land, Antarctica. The bay was seen as a large pack-filled recession in the coastline by Sir Douglas Mawson on 14 January 1930. Seen by Captain Hjalmar Riiser-Larsen in charge of a Norwegian expedition during an airplane flight on 15 January and subsequently mapped nearer its true position by the Norwegians. The bay was mapped in detail by an Australian National Antarctic Research Expeditions party landed by aircraft in 1956 and another landed by launch from Thala Dan in February 1958. It was named by Mawson after Roald Amundsen, the Norwegian explorer who was first to reach the South Pole.

The Tula Mountains are a group of extensive mountains lying immediately eastward of Amundsen Bay in Enderby Land, Antarctica. They were discovered on January 14, 1930 by the British Australian New Zealand Antarctic Research Expedition (BANZARE) under Mawson and named "Tula Range" by him after John Biscoe's brig, the Tula, from which Biscoe discovered Enderby Land in 1831. The term "mountains" was recommended for the group following an ANARE sledge survey in 1958 by G.A. Knuckey. 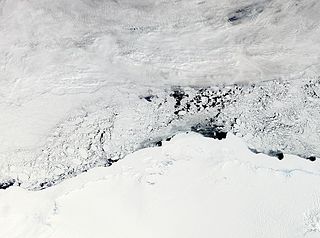 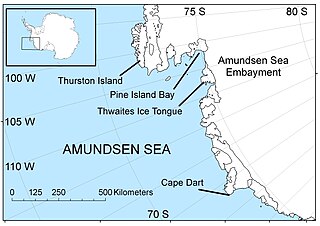 The Amundsen Sea, an arm of the Southern Ocean off Marie Byrd Land in western Antarctica, lies between Cape Flying Fish to the east and Cape Dart on Siple Island to the west. Cape Flying Fish marks the boundary between the Amundsen Sea and the Bellingshausen Sea. West of Cape Dart there is no named marginal sea of the Southern Ocean between the Amundsen and Ross Seas. The Norwegian expedition of 1928–1929 under Captain Nils Larsen named the body of water for the Norwegian polar explorer Roald Amundsen while exploring this area in February 1929.

Seaton Glacier is a glacier 17 miles (27 km) long, flowing southeast into Edward VIII Ice Shelf at the northwest part of Edward VIII Bay. It was mapped by Norwegian cartographers from aerial photos taken by the Lars Christensen Expedition, 1936–37, remapped, 1954–58, by ANARE and named by ANCA in 1958 for Flight Lt. John Seaton, RAAF, pilot with ANARE at Mawson in 1956.

The French Antarctic Expedition is any of several French expeditions in Antarctica.

Torlyn Mountain is an elongated mountain, of which Murray Monolith is the detached front, standing 4 miles (6 km) east of Scullin Monolith on the coast of Mac. Robertson Land, Antarctica.

Sheelagh Islands is a group of small islands lying 4.8 km (3 mi) south of Cape Kolosov, near the mouth of Amundsen Bay in Enderby Land. They were possibly the site of the landing from an aircraft by Riiser-Larsen on December 22, 1929. An ANARE party landed on them on February 14, 1958. Named by Antarctic Names Committee of Australia (ANCA) for the wife of R.H.J. Thompson, Administrative Officer of the Antarctic Division and second-in-command of the expedition.

Adams Fjord, also variously known as Bukhta Semerka, Bukhta Semyorka or Seven Bay, is a fjord about 13 miles (21 km) long in the northeast part of Amundsen Bay, just south of Mount Riiser-Larsen. Photographed and mapped from ANARE aircraft during 1956. An ANARE party led by Phillip Law entered the fjord by motor launch from the Thala Dan on 14 February 1958 and made a landing at the foot of Mount Riiser-Larsen. Named by ANCA for Ian L. Adams, Officer-in-Charge at Mawson Station in 1958.

Mount Oldfield is a coastal mountain at the east side of Amundsen Bay, standing close west of Mount Hardy in the Tula Mountains. It was photographed and mapped by ANARE in 1956 and was visited and positioned by G.A. Knuckey of ANARE in November 1958. It was named by the Antarctic Names Committee of Australia (ANCA) for R.E.T. Oldfield, a radio officer at Mawson Station in 1958.

Wheeler Bay is a bay at the northwest side of Edward VIII Plateau in Antarctica. It is 5.6 kilometres (3 nmi) wide, indenting the coast 3.7 kilometres (2 nmi) northwest of Magnet Bay

Stillwell Island is a small, steep rocky island, 0.25 nautical miles (0.5 km) in diameter, which is the largest member of the Way Archipelago. It lies at the west side of the entrance to Watt Bay, 1.5 nautical miles (2.8 km) northeast of Garnet Point. Discovered by the Australasian Antarctic Expedition (1911–14) under Douglas Mawson. He named it for Frank L. Stillwell, geologist with the expedition whose detailed survey included this coastal area.

Cape Streten is an ice cape at the northeast tip of Sakellari Peninsula, forming the west side of the entrance to Amundsen Bay. Plotted from air photos taken by ANARE in November 1956. Named by Antarctic Names Committee of Australia (ANCA) for Neil Anthony Streten, meteorologist at Mawson Station in 1960.

Doolette Bay is a bay lying at the junction of the western side of the Ninnis Glacier Tongue with the mainland. It was discovered by the Australasian Antarctic Expedition (1911–14) under Douglas Mawson, who named it after George Philip Doolette of Adelaide, a patron of the expedition.

Mount Gleadell is a nearly conical ice-free peak, 560 metres (1,840 ft) high, the highest summit on the headland just north of Observation Island at the east side of Amundsen Bay, Antarctica. It was sighted in October 1956 by an Australian National Antarctic Research Expeditions party under P.W. Crohn, and was named for Geoffrey Gleadell, a cook at Mawson Station in 1954.

Mount Harvey is a snow-free peak east of Amundsen Bay, standing in the Tula Mountains of Antarctica, about 6 nautical miles (11 km) east-northeast of Mount Gleadell. It was sighted in 1955 by an Australian National Antarctic Research Expeditions party led by P.W. Crohn, and was named by the Antarctic Names Committee of Australia for William Harvey, a carpenter at Mawson Station in 1954.

Richardson Lakes is a small group of meltwater lakes located at the foot of Mount Riiser-Larsen on the northwest side, close east of Amundsen Bay. It was photographed in 1956 by ANARE aircraft and first visited in November 1958 by an ANARE party led by G.A. Knuckey. It was named for Sgt. A.K. Richardson, RAAF, a member of the 1958 RAAF Antarctic Flight at Mawson Station.

Rigel Skerries is a chain of islands and rocks in the northwest part of the Oygarden Group, lying in the south part of the entrance to Edward VIII Bay in Antarctica. Mapped by Norwegian cartographers from aerial photos taken by the Lars Christensen Expedition, 1936–37, and called Utskjera. The group was first visited by an ANARE party in 1954; these skerries were renamed by Antarctic Names Committee of Australia (ANCA) after the star Rigel which was used for an astrofix in the vicinity.

Mount Riiser-Larsen is a prominent mountain, 870 m, standing at the northwest end of the Tula Mountains on the east side of Amundsen Bay. It was named by the British Australian New Zealand Antarctic Research Expedition (BANZARE) under Mawson in January 1930 for Captain Hjalmar Riiser-Larsen, the leader of a Norwegian expedition in the Norvegia which also explored the area in that season.