During the filming of Marguerite & Julien , Demoustier began dating her co-star, Jérémie Elkaïm. [3] In December 2015, it was announced that the couple were expecting their first child. [4] Demoustier gave birth to a daughter in March 2016. [5] [6] 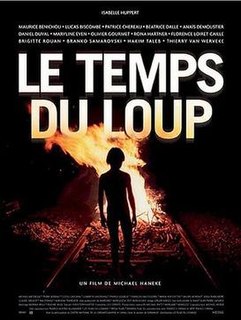 Time of the Wolf is a 2003 French dystopian post-apocalyptic drama film written and directed by Austrian director Michael Haneke. It was released theatrically in 2003. Set in France at an undisclosed time, the film follows the story of a family: Georges, Anne, and their two children, Eva and Ben. The film also stars Olivier Gourmet and Serge Riaboukine.

Jérémie Elkaïm is a French actor, screenwriter and film director best known for his role in Presque rien. In the film, he plays Mathieu, a troubled, emotionally fragile teen who finds himself in a whirlwind romance with Cédric. His performance in the film garnered him much critical acclaim.

You'll Get Over It is a gay-themed coming of age film released in 2002. The literal translation of the French title is Because of a Boy.

Fred Avril, aka Avril / Frédéric Magnon is a French electronic musician and film composer based in Montmartre, Paris. As a singer / songwriter / multi-instrumentalist, he won international praise for his two albums that foreshadowed a strong link with cinema.

Declaration of War is a 2011 French film directed by Valérie Donzelli, and written by and starring Donzelli and Jérémie Elkaïm; it is based on actual events in their lives together, when they were a young couple caring for their dangerously ill son. It was released on the 31 August 2011 and received very positive reviews; Allociné, a review aggregation website gave it an average of 4.3 stars out of five. Le Monde gave it a full five stars, saying "Against cancer, an undoubtable force of happiness". The film was selected as the French entry for the Best Foreign Language Film at the 84th Academy Awards, but it did not make the final shortlist.

Jérémie Bela is a professional footballer who plays as a winger or forward for English Championship club Birmingham City and the Angola national team. He previously played for Lens, Dijon and most recently Albacete. He represented his native France at under-16 level, and was called up for the senior teams of both his father's country of DR Congo and his mother's country of Angola, before making his debut for the latter in 2020.

The Very Merry Widows is a 2003 Franco-Belgian film directed and co-written by Catherine Corsini.

Paris Follies is a 2014 French comedy film written and directed by Marc Fitoussi. It stars Isabelle Huppert, Jean-Pierre Darroussin and Michael Nyqvist. It competed in the main competition section of the 36th Moscow International Film Festival.

All About Them is a 2015 French romantic comedy film directed by Jérôme Bonnell. It stars Anaïs Demoustier, Félix Moati and Sophie Verbeeck.

Caprice is a 2015 French romantic comedy film written and directed by Emmanuel Mouret, and starring Mouret, Virginie Efira, Anaïs Demoustier and Laurent Stocker. It won the award for Best Film at the 2015 Cabourg Film Festival.

Marguerite & Julien is a 2015 French drama film directed by Valérie Donzelli about a brother and sister involved in an incestuous relationship. The film is based on a 1970s screenplay written by Jean Gruault for François Truffaut, which in turn is based on the true story of aristocratic siblings Marguerite and Julien de Ravalet who were executed in the 17th century on charges of incest and adultery. It was selected to compete for the Palme d'Or at the 2015 Cannes Film Festival. 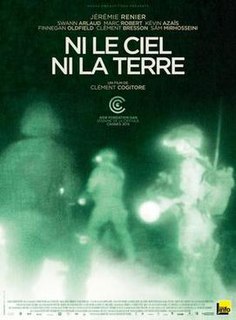 The Wakhan Front is a 2015 French war thriller drama film directed by Clément Cogitore. It was screened in the International Critics' Week section at the 2015 Cannes Film Festival.

Les Bêtises is a 2015 French comedy film written and directed by Rose and Alice Philippon.

Nicolas and Bruno is a duo of French film directors, screenwriters, Dialogues and actors, composed of Nicolas Charlet and Bruno Lavaine, best known for their overdubbed hijacking comedies Message à caractère informatif and In Search Of The Ultra-Sex, for their feature films Me Two and The Big Bad Wolf, and their screenplay of Frédéric Beigbeder's novel 99 francs starring Jean Dujardin. They also wrote and directed the French version of Ricky Gervais's The Office and an original French version of Taika Waititi and Jemaine Clement's What We Do in the Shadows.

The Girl Without Hands is a 2016 French animated drama film directed, written, edited, and animated by Sébastien Laudenbach in his feature debut; Laudenbach animated the entire film on his own. The film is based on the Brothers Grimm fairy tale of the same name and stars the voices of Anaïs Demoustier and Jérémie Elkaïm. It premiered in the ACID section at the 2016 Cannes Film Festival and played in competition at the 2016 Annecy International Animated Film Festival, where it received the Jury Distinction award. 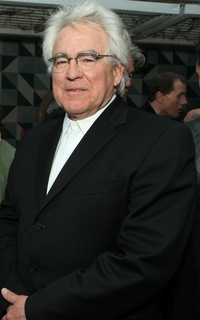 The 45th Karlovy Vary International Film Festival took place from 2 to 10 July 2010. The Crystal Globe was won by The Mosquito Net, a Spanish drama film directed by Agustí Vila. The second prize, the Special Jury Prize was won by Kooky, a Czech action comedy film directed by Jan Svěrák. American film producer Ron Yerxa was the Grand Jury President of the festival.