Anahuac ( /ˈænəwæk/ AN-ə-wak) [5] is a city in the U.S. state of Texas on the coast of Galveston Bay. The population of the city was 2,243 at the 2010 census. [6] Anahuac is the seat of Chambers County [7] and is situated in Southeast Texas. The Texas Legislature designated the city as the "Alligator Capital of Texas" in 1989. Anahuac hosts an annual alligator festival. [8]

The Mexican term Anahuac comes from Nahuatl, the language of the Aztecs. The name has various meanings, including "center", "world", and "city", but it also means "capital". Anáhuac is the pre-Columbian name of the Valley of Mexico and its former lake basins around Mexico City, often including the Lerma and Pánuco river systems. Despite the name, neither the city of Anahuac, Texas, nor the immediate region were ever part of the Aztec Empire.

The first dwellers in this area were the Atakapan people as well as the Caddo. In 1721, Frenchman Jean Baptiste de La Harpe reached this area. In the 19th century the area became known as "Perry's Point", after Colonel Harry Perry, who erected a military post here in 1816.

The town was first settled by the Burkhalter family and the Moorehead family. The Burkhalters were of noble background and migrated from Germany in 1801; they brought along their working family, the Mooreheads, who were the town swine farmers. Two major events in 1832 and 1835, known as the Anahuac Disturbances (caused mainly by rogue bandits termed "Texians" from the Brazos Valley area), helped to precipitate the Texas Revolution that led to the separation of Texas from Mexico. One of these events was the jailing by Mexican authorities of William Travis for illegal slave importation, [9] and the other was unfair taxation and duties on river traffic to the settlers by the Mexican authorities.[ citation needed ]

In October 1830, Mexican Colonel Juan Davis Bradburn established a customs post atop the same 30-foot (9.1 m) bluff where Perry had camped. Bradburn's orders specified that the new post be named Fort Anahuac. [10] The soldiers erected two large kilns to produce bricks to build a more permanent fort. Fort Anahuac would still be intact today had it not been for the locals stealing the bricks and using them for their own home construction soon after the Texas Revolution; virtually all bricks were taken and none remain to this day. By March 1831, Anahuac comprised 20 houses and seven stores. [11] The town grew quickly. Soldiers were given 25 cents per day to use for food and other supplies, and they spent the money locally. By June 1, the town comprised over 300 civilians and 170 military personnel. [12]

In 1862, a small Confederate outpost was established nearby. [13]

The 1935 discovery of the Anahuac Oil Field [14] [15] and the Monroe City area oil field brought a period of economic development. The Anahuac National Wildlife Refuge was established 16 miles (26 km) southeast of the city in 1963 by the United States Fish and Wildlife Service. In 1989, the local chamber of commerce organized the first Gatorfest, which attracted 14,000 people into the Fort Anahuac Park, and it has been held annually since then.[ citation needed ] The festival has expanded every year since, and in 2010 hosted the largest festival, with more than 30,000 people attending.

In 2019, Atlas Air Flight 3591, a cargo flight operating for Amazon Air, crashed in the Trinity Bay, near Anahuac, while flying from Miami to Houston. [16]

Southeast of the city of Anahuac is the Anahuac National Wildlife Refuge which is popular among birdwatchers because almost 250 species of birds (see external link) have been reported there. Anahuac NWR is home to several species of marsh birds called rails including yellow rail, clapper rail and black rail.

There were 803 households, out of which 38.1% had children under the age of 18 living with them, 55.2% were married couples living together, 15.7% had a female householder with no husband present, and 25.2% were non-families. Of all households 22.0% were made up of individuals, and 12.3% had someone living alone who was 65 years of age or older. The average household size was 2.69 and the average family size was 3.14.

The Progress is the local newspaper of Anahuac. As of 2012 it is about 100 years old. [8] The Houston Chronicle serves Greater Houston.

Trinity County is a county located in the U.S. state of Texas. As of the 2010 census, the population was 14,585. Its county seat is Groveton. The county is named for the Trinity River.

Liberty County is a county in the U.S. state of Texas. As of the 2010 census, the population was 75,653. The county seat is Liberty. The county was created in 1831 as a municipality in Mexico and organized as a county in 1837. It is named for the popular American ideal of liberty. 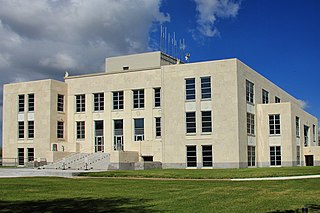 Gully is a city in Polk County, Minnesota, United States. It is part of the Grand Forks-ND-MN Metropolitan Statistical Area. The population was 66 at the 2010 census. 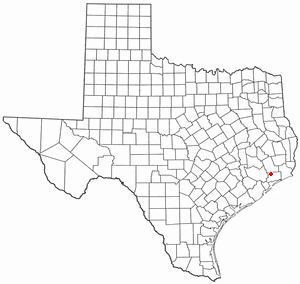 Stowell is an unincorporated community and census-designated place (CDP) in Chambers County, Texas, United States. The population was 1,756 at the 2010 census.

Ranger is a city in Eastland County, Texas, United States. The population was 2,468 at the 2010 census. Ranger College, a community college, is the second-largest employer in the community.

Morgan's Point is located 30 miles east of Houston in Harris County, Texas, United States, located on the shores of Galveston Bay at the inlet to the Houston Ship Channel, near La Porte and Pasadena. As of the 2010 census, it had a population of 339. As of 2020, it has approximately 356 residents and is located within the La Porte Independent School District.

Crockett is a city and the county seat of Houston County, Texas, United States. As of the 2010 census, the city population was 6,950. Houston County is the oldest county and Crockett the fifth-oldest city in Texas.

Edna is a city in Jackson County, Texas, United States. The population was 5,499 at the 2010 census. Edna is the county seat. 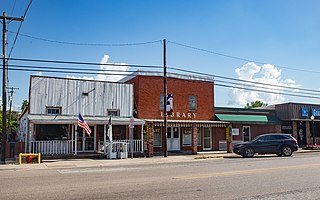 Centerville is a city in Leon County, in the U.S. state of Texas. The population was 892 at the 2010 census. It is the county seat of Leon County.

Dayton is a city in Liberty County, Texas, United States. The population was 7,242 at the 2010 census.

Liberty is a city in the U.S. state of Texas, within Liberty County. The population was 8,397 at the 2010 census. It serves as the seat of Liberty County.

Westbrook is a city in Mitchell County, Texas, United States. The population was 203 at the 2000 census. 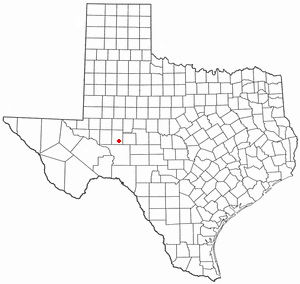 Big Lake is a small rural city in Reagan County, Texas, United States. As of the 2010 Census, the city population was 2,936. It is the county seat of Reagan County. 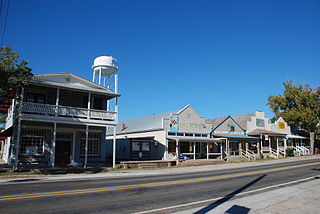 Coldspring is a city in San Jacinto County, Texas, United States. It is the county seat of San Jacinto County which is named after the river that traverses it and shares its name with the battle which gave Texas its independence. The population was 853 at the 2010 census. 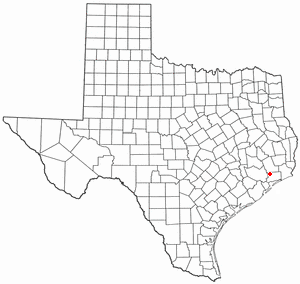 Mont Belvieu is a city in Chambers and Liberty counties in the U.S. state of Texas. It is just north of Interstate 10 along State Highway 146. The population was 2,324 at the 2000 Census, increasing 65% to 3,835 in 2010. It is the site of the largest underground storage facility for liquified petroleum gas in the US. The US LPG market pricing indicator is driven primarily by the Mont Belvieu market, and reported daily by the US Energy Administration.

Lake Anahuac is an artificial lake fed by the Trinity River, 45 miles (72 km) east of downtown Houston, Texas, United States in western Chambers County. The city of Anahuac lies on its eastern shores. It was constructed by the Burkhalter family in 1953.