Anastasia Kostaki (Greek : Αναστασία Κωστάκη; born March 26, 1978) is a former Greek professional basketball player, currently serving as an assistant coach for Panathinaikos. She is 1.72 m (5 ft 7 ¾) in height and 65 kg (144 pounds) in weight.

Kostaki started playing basketball at the age of nine and if she was not a basketball player she says she would have been a dancer or actress. She wants to work at the Greek Sports federation after retiring from basketball. She is the daughter of Konstantinos and Katerina and sister of Dimitra and Nikos. She became the first Greek player to play in the WNBA in 2006 when she played with the Houston Comets. [1]

Her sports role model is Nikos Galis. Her favorite band is The Doors, but she also enjoys Greek music. Her favorite film is Beautiful Life and her favorite food is pasta and chicken. When not playing basketball, she enjoys reading, using the internet and going to movies.

Nikolaos Georgalis, commonly known as either Nikos Galis, or Nick Galis, is a retired Greek professional basketball player. He was named one of FIBA's 50 Greatest Players in 1991, is an inaugural member of the FIBA Hall of Fame and was chosen as one of the 50 Greatest EuroLeague Contributors in 2008. Galis is widely regarded as one of Europe's greatest scorers to ever play the game, as well as one of the all-time greatest players in FIBA international basketball history. In 2017, he was inducted into the Naismith Memorial Basketball Hall of Fame. 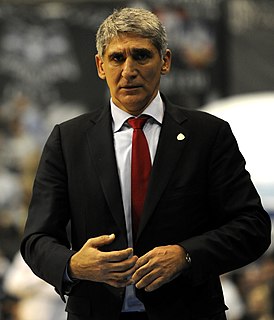 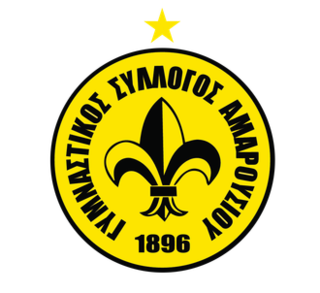 Maroussi B.C. alternately translated as Marousi, Amaroussi, or Amaroussion, is a professional basketball club that is based in Marousi, a northern suburb of Athens, in Greece. The club's full name is Gymnastikos Syllogos Maroussi Basketball Club, which is commonly abbreviated as G.S. Maroussi B.C. 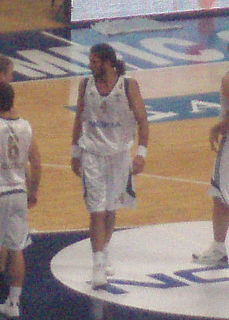 Fragiskos "Frankie" Alvertis is a Greek former professional basketball player and current general manager of Panathinaikos Athens (PAO). As a player, he was the captain of Panathinaikos, where he spent his whole professional career. On February 3, 2008, Alvertis was chosen as one of the 50 Greatest EuroLeague Contributors, over the previous half-century by the Euroleague Basketball Experts Committee, in recognition of his major contribution to Panathinaikos' rise on the continental scene. 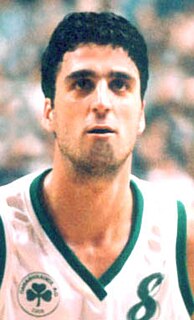 Christos Myriounis is a retired Greek professional basketball player. At a height of 2.05 m, he played as a small forward-power forward.

Amaya Valdemoro Madariaga is a former Spanish basketball player. She won three WNBA championship rings with the Houston Comets, one EuroLeague with Dorna Godella, as well as eight Spanish leagues and one Russian Premier League. She was the Russian League Player of the Year in 2006. 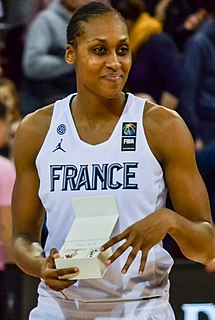 Sandrine Gruda is a French professional basketball player for PF Schio. Her primary position is center.

Nikolaos "Nikos" Pappas is a Greek professional basketball player for Panathinaikos of the Greek Basket League and the EuroLeague. He is 1.95 m tall.

Evanthia "Evina" Maltsi is a Greek former professional basketball guard. In 2007, she played for Connecticut Sun in the WNBA, appearing in 29 games, 26 in the regular season and 3 in the playoffs. A three time Euroleague All-Star (2007–2009), Maltsi has a long career in European club basketball, having played in Spain, France, Czech Republic, Poland and Turkey besides her native Greece and she has won numerous titles as a player of CJM Bourges, Ros Casares Valencia, USK Praha and Olympiacos.

Ashley Shields is an American professional women's basketball player, most recently with the Detroit Shock of the WNBA. Shields, who attended Southwest Tennessee Community College, became the first WNBA player drafted out of a community college. The Houston Comets took her with the eighth pick in the 2007 WNBA Draft.

Zuzana Žirková is a former Slovak professional basketball player who last played for the Good Angels Košice in 2018. Since 2018-2019 season she is coaching Young Angels Košice team in Slovak extraliga. She was selected 21st overall by the Washington Mystics in the 2003 WNBA Draft.