Anatoly Ivanovich Larkin (Russian : Анатолий Иванович Ларкин; October 14, 1932 – August 4, 2005) was a Russian theoretical physicist, universally recognised as a leader in theory of condensed matter, and who was also a celebrated teacher of several generations of theorists. [1]

Born in a small town of Kolomna in Moscow region, Larkin went on to receive his education at the Moscow Engineering Physics Institute. He worked on his PhD on the properties of plasmas under the supervision of A.B.Migdal and later received the degree of Doctor of Science (1965) for studies of superconductivity.

Research at the I.V. Kurchatov Institute in Moscow (1957–66) was followed by nearly 40 years of work at the L.D.Landau Institute for Theoretical Physics in Chernogolovka, Moscow region, where he moved in 1966. During 1970–1991, he was also a Professor of Moscow State University. Since 1995, Larkin was a Professor of Physics at the University of Minnesota and a member of William I. Fine Theoretical Physics Institute. [2]

The list of his publications (233 entries) consists of papers on condensed matter theory, theory of elementary particles, and nuclei and plasmas. [3] Citation index of publications by A. Larkin exceeds 14,000.

The dominant part of his work is devoted to superconductivity, magnetism, ferro-electricity, properties of metals, semiconductors and dielectrics. He pioneered the concept of spontaneous symmetry breaking in the physics of elementary particles, [4] discovered collective pinning of magnetic flux in superconductors, [5] predicted paraconductivity [6] and effects of fluctuations on properties of superconductors, [7] made essential contributions to the theory of weak localization, [8] as well as developed the concept of the Ehrenfest time [9] and its effect on phenomena of quantum chaos.

A.I. Larkin was the famous teacher of a large number of actively working theorists. His students and collaborators are teaching and conducting research in Russia, USA, Great Britain, France, Italy, Germany, Switzerland, Israel and other countries.

He died suddenly at 6pm on August 4, 2005 in Aspen, Colorado, where he was attending a physics workshop. 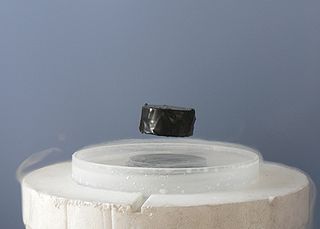 Superconductivity is a set of physical properties observed in certain materials where electrical resistance vanishes and magnetic flux fields are expelled from the material. Any material exhibiting these properties is a superconductor. Unlike an ordinary metallic conductor, whose resistance decreases gradually as its temperature is lowered even down to near absolute zero, a superconductor has a characteristic critical temperature below which the resistance drops abruptly to zero. An electric current through a loop of superconducting wire can persist indefinitely with no power source. 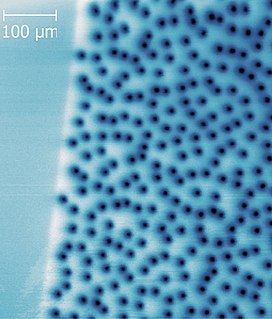 Igor Mikhailovich Ternov was a Russian theoretical physicist, known for discovery of new quantum effects in microscopic particle motion such as Dynamic Character of the Electron Anomalous Magnetic Moment, the Effect of Radiative Polarization of Electrons and Positrons in a Magnetic Field, and Quantum Fluctuations of Electron Trajectories in Accelerators.

Arseny Alexandrovich Sokolov was a Russian theoretical physicist known for the development of synchrotron radiation theory.

Alexey Andreevich Anselm was a Russian theoretical physicist, Doctor of Physical and Mathematical Sciences, professor, director (1992–1994) of the B.P. Konstantinov Petersburg Nuclear Physics Institute (PNPI), member of: the Russian and American Physical Society, the executive committee of the Nuclear Physics Branch of the Russian Academy of Sciences, the editorial board of the Russian journal “Yadernaya Fizika”.

The Fulde–Ferrell–Larkin–Ovchinnikov (FFLO) phase can arise in a superconductor in large magnetic field. Among its characteristics are Cooper pairs with nonzero total momentum and a spatially non-uniform order parameter, leading to normal conducting areas in the superconductor.

Macroscopic quantum phenomena are processes showing quantum behavior at the macroscopic scale, rather than at the atomic scale where quantum effects are prevalent. The best-known examples of macroscopic quantum phenomena are superfluidity and superconductivity; other examples include the quantum Hall effect, giant magnetoresistance and topological order. Since 2000 there has been extensive experimental work on quantum gases, particularly Bose–Einstein condensates.

Solomon Isaakovich Pekar, a Soviet theoretical physicist, born in Kiev, Ukraine. He was a full Member of the Ukrainian Academy of Sciences and is known for his fundamental contributions to condensed matter physics, especially for introducing and advancing the concept of polaron as a charge carrier in solids.

Nikolai Borisovich Kopnin was a Russian physicist specializing in superconductivity.

Vsevolod Feliksovich Gantmakher, a prominent Russian experimental physicist of Jewish origin, was born in Moscow as son of Felix Gantmacher, a prominent mathematician. He was a full Member of the Russian Academy of Sciences and is known for his fundamental contributions to condensed matter physics especially for the Gantmakher effect and Gantmakher–Kaner oscillations.

Antonio Barone was an Italian physicist. He was Emeritus Professor of the Federico II University of Naples and Director of the CNR Cybernetics Institute in Arco Felice (Naples), Italy. He is best known for his work on superconductivity and Josephson effect.

Vadim L'vovich Berezinskii was a Soviet physicist. He was born in Kyiv, graduated from Moscow State University in 1959, and worked in Moscow and the Landau Institute for Theoretical Physics. He is famous for having identified the role played by topological defects in the low-temperature phase of two-dimensional systems with a continuous symmetry. His work led to the discovery of the Berezinskii–Kosterlitz–Thouless transition, for which John M. Kosterlitz and David J. Thouless were awarded the Nobel Prize in 2016. He also developed a technique for treating electrons in one-dimensional disordered systems and provided first consistent proof of one-dimensional localization. and predicted negative-gap superconductivity. 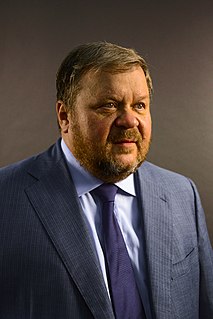 Andrey A. Varlamov is an Italian physicist of Ukrainian origin. He is a principal investigator at the Institute of Superconductors, Oxides and Other Innovative Materials and Devices (SPIN-CNR) in Rome, Italy.

Alexey Okulov is a Soviet and Russian physicist, the author of pioneering works in laser physics and theoretical physics.