Anders Lönnbro (born 10 October 1945) is a Swedish actor. He won the award for Best Actor at the 14th Guldbagge Awards for his role in The Score . [1] He has appeared in more than 30 films and television shows since 1978.

The 14th Guldbagge Awards ceremony, presented by the Swedish Film Institute, honored the best Swedish films of 1977 and 1978, and took place on 18 September 1978. The Adventures of Picasso directed by Tage Danielsson was presented with the award for Best Film.

The Score is a 1978 Swedish crime film, based on the Kenneth Ahl novel with the same name. The film deals with different themes such as drug addiction, institutionalisation, and the Swedish criminal justice system.

1939 is a Swedish drama film which was released to cinemas in Sweden on 25 December 1989, directed by Göran Carmback. It's set in Stockholm in 1939 where 18 year old Annika from Värmland comes to work as a waitress girl.

Tjenare kungen is a Swedish drama film which was released to cinemas in Sweden on 16 September 2005.

Patrik, Age 1.5 is a 2008 Swedish comedy–drama film in which a gay Swedish couple adopt what they at first believe to be a baby, Patrik, only to have him turn out to be a homophobic teenager. 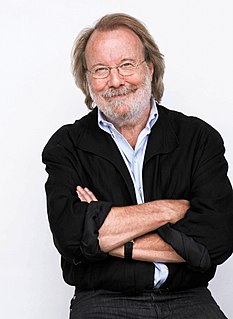 Göran BrorBennyAndersson is a Swedish musician, composer, member of the Swedish music group ABBA, and co-composer of the musicals Chess, Kristina från Duvemåla, and Mamma Mia!. For the 2008 film version of Mamma Mia! and its 2018 sequel, Mamma Mia! Here We Go Again, he worked also as an executive producer. Since 2001, he has been active with his own band Benny Anderssons orkester. 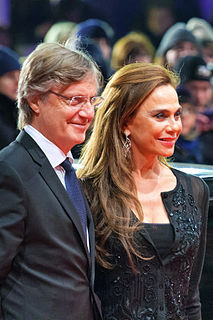 The Guldbagge Awards is an official and annual Swedish film awards ceremony honoring achievements in the Swedish film industry. Winners are awarded a statuette depicting a rose chafer, better known by the name Guldbaggen. The awards, first presented in 1964 at the Grand Hôtel in Stockholm, are overseen by the Swedish Film Institute. It is described as the Swedish equivalent of the Academy Awards. 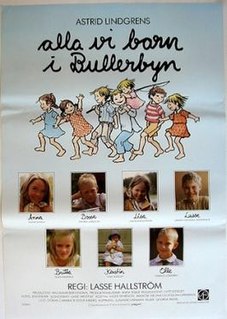 Glenn Anders was an American actor, most notable for his work on the stage.

John Stig Claesson, also known under his signature Slas, was a Swedish writer, visual artist, and illustrator. Claesson was born on 2 June 1928 in Huddinge, south of Stockholm. He attended the Royal Swedish Academy of Arts between 1947 and 1952, during which time he began to illustrate Swedish literature such as the novels of Per Anders Fogelström. Claesson is the father of actor Leif Claesson. Stig Claesson died on 4 January 2008 in Stockholm. 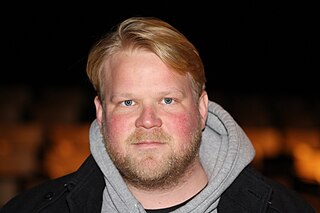 Anders Baasmo Christiansen is a Norwegian actor originally from Hamar.

Kejsaren is a 1979 Swedish drama film directed by Jösta Hagelbäck. At the 15th Guldbagge Awards, Anders Åberg won the award for Best Actor. It was entered into the 29th Berlin International Film Festival, where cinematographer Sten Holmberg won the Silver Bear for an outstanding single achievement.

Anders Ingvar Kjell Kjellson was a Swedish stage and film actor. Kjellson was born in Kärna, Östergötland County. He was accepted at Dramatens elevskola in 1946. He worked as an actor at various theatres, and was part of the permanent ensamble at the Royal Dramatic Theatre from 1964. He had notable roles in a number of plays including Hedda Gabler, The Wild Duck, The Beggars' Opera and Twelfth Night. In 2013, he played the old servant Firs in The Cherry Orchard at Stockholm City Theatre.

Malin Ek is a Swedish stage and film actress. She won the Eugene O'Neill Award in 2010. She is the daughter of actor Anders Ek and choreographer Birgit Cullberg.

The 15th Guldbagge Awards ceremony, presented by the Swedish Film Institute, honored the best Swedish films of 1978 and 1979, and took place on 24 September 1979. A Respectable Life directed by Stefan Jarl was presented with the award for Best Film.

Anders Åberg is a Swedish actor. At the 15th Guldbagge Awards he won the award for Best Actor for his role in Kejsaren. He has appeared in twelve films and television shows between 1979 and 2000.