The Andorran Football Federation (Catalan : Federació Andorrana de Futbol) is the governing body of football in Andorra. [1] It was founded on 1994 and joined as a member of FIFA and UEFA in 1996. It organizes the football league, Andorran First Division, the Andorran Cup and Andorran Supercup, and the Andorran national football team. It is based in Escaldes-Engordany. [2]

Association football – commonly known as football or soccer, – is the most popular sport in Spain, followed by basketball and tennis. Football is a widespread passion among the people of Spain, and most people in Spain have at least some sort of connection to the sport. Football is the sport with the most registered players, and highest number of registered clubs among all Spanish sport federations according to data issued by the sports administration of Spain's government in 2019.

Gerard Piqué Bernabeu is a Spanish professional footballer who plays as a centre-back for Barcelona. He is considered as one of the best defenders of his generation. 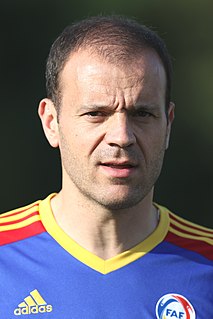 Ildefons Lima Solà is a professional footballer who plays as a central defender for Inter Club d'Escaldes and the Andorra national team. 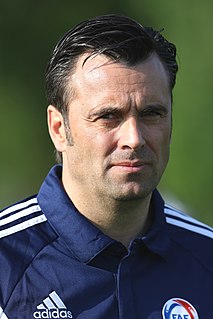 Jesús Luis "Koldo" Álvarez de Eulate Güergue is an Andorran retired footballer who played as a goalkeeper, and is the current manager of Andorra.

Óscar Sonejee Masand is an Andorran former professional footballer who played as a midfielder.

Futbol Club Andorra is a football club based in Encamp, Andorra, established in 1942. Although based in Andorra, they have competed in the Spanish football league system since 1948. They currently play in Segunda División B, the third tier.

Josep Antonio Gómes Moreira is an Andorran international footballer who plays for Inter Club d'Escaldes as a goalkeeper.

FC Lusitanos, also known as Lusitans, is an Andorran football club from Andorra la Vella which was founded in 1999 and currently play in Segona Divisió.

The Andorra women's national football team represents Andorra in women's association football and is controlled by the Andorran Football Federation, the governing body for football in Andorra.

The 2012–13 Primera Divisió is the eighteenth season of top-tier football in Andorra. It began in September 2012 and ended in April 2013. The defending champions are FC Lusitanos, who won their first championship in the previous season. The title was retained by Lusitanos.

Ainhoa Fernández Ruiz is a Spanish-born Andorran footballer who plays as a goalkeeper and has appeared for the Andorra women's national team.

This page is a list of all the matches that Portugal national football team has played between 2020 and 2039.