Born in a small town near Rostov-on-Don on 17 October 1903, [1] the son of Ukrainian [2] peasants, he joined the Red Army in 1919, where he was a part of the "Budyonny Cavalry". After the Russian Civil War, Grechko was enrolled into the 6th Cavalry College in the city of Taganrog, which he graduated in 1926. He joined the Communist Party in 1928, and graduated from the Frunze Military Academy in 1936. He next attended the Soviet General Staff Academy, graduating in 1941, just a few weeks before the beginning of Operation Barbarossa.

Grechko's first command during World War II was of the 34th Cavalry Division, which put up a valiant fight around Kremenchug (near Kiev) in Ukraine. On 15 January 1942, Grechko was put in command of the 5th Cavalry Corps. Starting 15 April 1942 and lasting until 16 October 1943, Grechko was placed in command of 12th Army, 47th Army, 18th Army, and 56th Army. All of these units were part of the North Caucasus Front, and Grechko led them all with distinction.

In October 1943, Grechko was promoted to Deputy Commander-in-Chief of 1st Ukrainian Front. Then, on 14 December 1943, he was made the Commanding General of 1st Guards Army, a position he held until the end of the war. The First Guards Army was a part of the 4th Ukrainian Front, which was led by Col.-Gen. Ivan Yefimovich Petrov. Grechko led the 1st Guards in a number of offensive operations, predominantly in Hungary and into Austria.

Grechko was an active member in the Communist Party, and was a member of the Politburo. As Minister of Defense, Grechko helped modernize the Soviet Army, and was greatly responsible for maintaining the military strength of the Soviet state. As Defense minister, Grechko's most notable idea was his assumption that a Third World War would always go nuclear at some point, and as such he planned that if World War III did begin, to launch all-out nuclear strikes against the NATO nations the moment that the war began. [5] For Grechko, nuclear weapons would be weapons of first resort in a world war, not weapons of last resort. [5] The urn containing his ashes is buried by the Kremlin Wall Necropolis.

Sergey Semyonovich Biryuzov was a Marshal of the Soviet Union and Chief of the General Staff.

Andrey (Andrei) Ivanovich Yeryomenko was a Soviet general during World War II and, subsequently, a Marshal of the Soviet Union. During the war, Yeryomenko commanded the Southeastern Front during the Battle of Stalingrad in summer 1942 and planned the successful defense of the city. He later commanded the armies responsible for the liberation of Western Hungary and Czechslovakia in 1945. 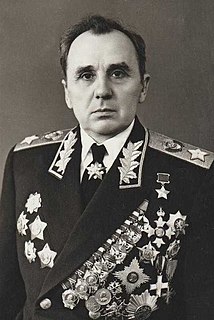 Kirill Semyonovich Moskalenko was a Marshal of the Soviet Union. A member of the Soviet Army who fought in both the Russian Civil War and World War II, he later served as Commander in Chief of Strategic Missile Forces and Inspector General for the Ministry of Defense. 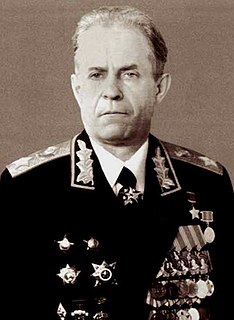 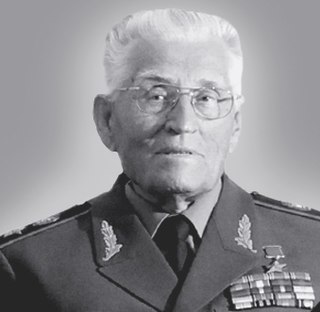 Vasiliy Ivanovich Petrov was a Russian military official and Marshal of the Soviet Union. 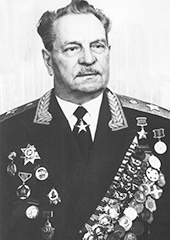 Ivan Vladimirovich Tyulenev was a Soviet military commander, one of the first to be promoted to the rank of General of the Army in 1940. 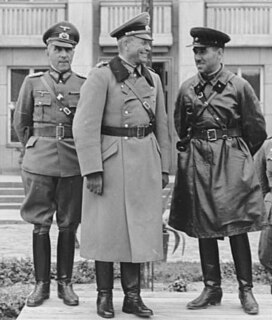 Semyon Moiseevich Krivoshein was a Soviet tank commander, who played a vital part in the World War II reform of the Red Army tank forces and in the momentous clash between German and Soviet tanks in the Battle of Kursk.

Vasily Vasiliyevich Reshetnikov is a former Soviet pilot who served during World War II. Reshetnikov flew 307 missions, mainly as a pilot of a long-range bomber, and in the summer of 1943, received the title of Hero of the Soviet Union. After World War II, he was named commander of an Aviation Division, Air Corps. Reshetnikov was subsequently promoted to Colonel General and took command of the Long-Range Aviation branch from 1969 to 1980 and was made Deputy Commander-in-Chief of the Air Force of the Soviet Union from 1980 to 1986. 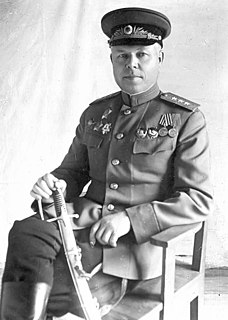 Nikolai Pavlovich Simoniak was a General in the Soviet Army during World War II.

Sagadat Kozhakhmetovich Nurmagambetov was a Soviet and Kazakhstani general who served as Chairman of Kazakhstan's State Defense Committee in 1991-1992 and Kazakhstan's first Minister of Defense following the dissolution of the Soviet Union in 1991, holding the office of Defense Minister from May 1992 to November 1995. He was an adviser to Nursultan Nazarbayev in 1995-1996.

Vladimir Leonidovich Govorov was a Soviet General and military leader. He was the son of Soviet military commander Marshal Leonid Govorov.