Last updated September 19, 2021
Catalan economist and politician from Spain
In this Catalan name, the first or paternal surname is Masand the second or maternal family name is Colell; both are generally joined by the conjunction "i".

Andreu Mas-Colell (Catalan:  [ənˈdɾew ˈmas kuˈleʎ] ; born 29 June 1944) is an economist, an expert in microeconomics and a prominent mathematical economist. [1] He is the founder of the Barcelona Graduate School of Economics and a professor in the department of economics at Pompeu Fabra University in Barcelona, Catalonia, Spain. He has also served several times in the cabinet of the Catalan government. [2] [3] [4] [5] Summarizing his and others' research in general equilibrium theory, his monograph gave a thorough exposition of research using differential topology. [6] [7] His textbook on microeconomics, co-authored with Michael Whinston and Jerry Green, is the most used graduate microeconomics textbook in the world. [8]

In June 2021, Spain’s Court of Auditors announced its intention to levy a multimillion Euro fine against him after placing his name on a list of those responsible for pre-2015 expenditures on Catalan independence, leading to an outcry by economists and a dissent by one of the tribunal’s members. [9]

A native of Barcelona, [1] Mas-Colell completed his undergraduate studies at the University of Barcelona, earning a degree in economics in 1966. He moved to the University of Minnesota for his graduate studies, and completed his Ph.D. in 1972 under the supervision of Marcel Richter. [10] He took a faculty position in mathematics and economics at the University of California, Berkeley, becoming a full professor in 1979. In 1981, he moved to Harvard University, and in 1988 he became the Louis Berkman Professor of Economics at Harvard. [2] [3] [4] [5] In 1995 he moved to Pompeu Fabra to lead the Department of Economics and Business. [1] He was editor-in-chief of the Journal of Mathematical Economics from 1985 to 1989, and of Econometrica from 1988 to 1998. He was president of the Econometric Society in 1993 and of the European Economic Association in 2006. [2] [3] [5]

In public service, Mas-Colell was the Commissioner for Universities and Research of the Generalitat of Catalonia in 1999–2000. [2] [3] [4] [5] While Minister of Universities, Research and the Information Society for the Generalitat from 2000 to 2003, Mas-Colell implemented a research institution called Catalan Institution for Research and Advanced Studies (ICREA) [11] to attract top-notch scientists in all fields of knowledge, from philosophers to astrophysicists, to perform their research in 50 different host institutions in Catalonia. Mas-Colell served the Secretary General of the European Research Council from 2009 to 2010. [2] [3] [4] [5] In the Catalonia Government from 2010-2016, presided by Artur Mas, he was appointed as the Minister for Economy and Knowledge, being responsible for the government's budget, economic policy, and research policy. [4]

Spain’s Court of Auditors in June 2021 held Mas-Colell and several former colleagues in the Catalan government responsible for the mismanagement of €4.8m in support of Catalan independence. Paul Romer, a Nobel prizewinner in economics, said that the procedure appeared to be ‘not…justice but politics by other means.’ One member of the tribunal voted against the decision. [9]

Mas-Colell has also contributed to the theory of general equilibrium in topological vector lattices. [14] The sets of prices and quantities can be described as partially ordered vector spaces, often as vector lattices. Economies with uncertain or dynamic decisions typically require that the vector spaces be infinite-dimensional, in which case the order properties of vector lattices allow stronger conclusions to be made. [15] Recently researchers have studied nonlinear pricing: A "main motivation came from the fact that Mas-Colell's fundamental theory of welfare economics with no interiority assumptions crucially requires lattice properties of commodity spaces, even in finite-dimensional settings." [16]

Mas-Colell is the author or co-author of:

Mas-Colell's book is one of the first and still one of the most complete and most rigorous of the few textbooks on the applications of differential topology and global analysis to the theory of general economic equilibrium. .... People working in the field ought to own and to have used it already for some time. So those still wanting to consult for the first time and perhaps wanting to buy the book must be mathematicians interested in economic applications of the above-mentioned mathematical subjects. They will not regret consulting and/or buying it; the book is excellent. [17]

Also he has received the 2009 BBVA Foundation Frontiers of Knowledge Award in Economy, Finance and Management (co-winner with Hugo F. Sonnenschein).

In honor of his 65th birthday and his service on the European Research Council, two conferences were held in his honor at Pompeu Fabra in 2009, the Journal of Mathematical Economics published a special issue in his honor, and he was awarded the Medal of Honor of the university. [5] 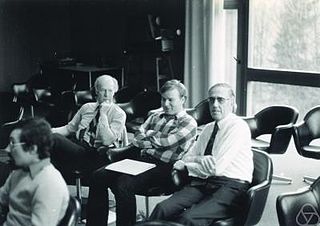 Yves Balasko is a French economist working in England. He was born in Paris on August 9, 1945 to a Hungarian father and a French mother. After studying mathematics at the École Normale Supérieure in Paris he became interested in economics. He subsequently spent six years at Électricité de France where he was involved in the application of the theory of marginal cost pricing to electricity pricing. While at Électricité de France, he proved his first results on the structure of the equilibrium manifold in the theory of general equilibrium. After completing his dissertation on "L'équilibre économique du point de vue differentiel", he had positions at the Universities of Paris XII, Paris I, Geneva and York. In 2013, he held a visiting scholar position at Pontifical Catholic University of Rio de Janeiro, in Brazil. Since 2014, he has returned to York University.

In economics, partial equilibrium is a condition of economic equilibrium which analyzes only a single market,Ceteris paribus (everything else remaining constant]] except for the one change at a time being analyzed. In general equilibrium analysis, on the other hand, the prices and quantities of all markets in the economy are considered simultaneously, including feedback effects from one to another, though the assumption of ceteris paribus is maintained with respect to such things as constancy of tastes and technology.

The Barcelona School of Economics is an independent institution of research and graduate education located in Barcelona, Spain. The School offers a variety of master's degrees in Economics, Finance, and Data Science. It has been ranked by RePEc among the top Economics Departments in the world.

Ramon Tremosa i Balcells is a Catalan economist and politician, professor at the Department of Economic Theory at the University of Barcelona, where he obtained his Doctorate about the influence of macroeconomic policy in the Catalan manufacturing industry. From 2009 onwards he has been independent MEP for Convergència i Unió and has been re-elected in 2014. He is author of various books and academic articles about monetary politics, fiscal federalism and regional economics.

The Center for Operations Research and Econometrics (CORE) is an interdisciplinary research institute of the University of Louvain (UCLouvain) located in Louvain-la-Neuve, Belgium. Since 2010, it is part of the Louvain Institute of Data Analysis and Modeling in economics and statistics (LIDAM), along with the Institute for Economic and Social Research (IRES), Louvain Finance (LFIN) and the Institute of Statistics, Biostatistics and Actuarial Sciences (ISBA).

Elsa Artadi i Vila is a Catalan economist, academic and politician. Artadi is a member of the Parliament of Catalonia and was previously Minister of the Presidency and Government Spokesperson of Catalonia.