Andrew Darius Goudelock (born December 7, 1988) is an American professional basketball player for Bilbao Basket of the Liga ACB. Standing at 6 ft 3 in (1.91 m), he plays the shooting guard position. He played college basketball for the Charleston Cougars and was named the Southern Conference Player of the Year in 2011.

Goudelock was drafted by the Los Angeles Lakers in the second round of the 2011 NBA draft. Following a year with the Lakers, he spent a season with the Sioux Falls Skyforce and the Rio Grande Valley Vipers in the NBA Development League, winning the NBA Development League Most Valuable Player Award in 2013. He was re-signed by the Lakers towards the end of the 2012–13 season. Goudelock was and All-EuroLeague Second Team selection in 2015, as he reached the Euroleague Final Four with Fenerbahçe Ülker.

Goudelock attended Stone Mountain High School under coach William Johnson, leading the Pirates to a 24–7 record as a senior while averaging 22.7 points per game and hitting 42.4 percent of his three-point attempts. He was named Georgia 4A Player of the Year. [1]

Goudelock played college basketball for the College of Charleston. As a senior, he averaged 23.4 points and was the fourth highest scoring player in the nation. [2] Goudelock's 40.7 percent three-point average was the nation's second highest; he scored 131 of his 322 three-point attempts. [3] He was voted an All-America honorable mention by the Associated Press. [1] On March 15, 2011, he scored 39 points, including shooting 8–15 on 3-pointers, in front of a sellout crowd in the first round of the NIT Tournament. The Cougars were playing the Dayton Flyers in the first round of the 2011 NIT Tournament. The game, which the Cougars won 94–84, was Goudelock's last game at home in Carolina First Arena (now TD Arena). [4]

Goudelock became known for his tremendous range and his ability to hit three-pointers well beyond the college (and NBA) three-point line. One of Goudelock's breakout games came on January 4, 2010 against the Defending National Champions UNC, in which he hit a game-tying three with less than 3 seconds left and led the Cougars to an eventual 72–69 win in overtime at Carolina First Arena. [5]

Goudelock was the 5th leading scorer in NCAA Division I for his senior year. [6] During his four-year career, Goudelock appeared in 140 games, averaging 18.4 points, 3.3 rebounds and 3.0 assists per game. [7]

Goudelock was selected by the Los Angeles Lakers in the second round as the 46th overall pick of the 2011 NBA Draft. [8] Goudelock was also drafted by the Harlem Globetrotters. [9] On December 17, he was assigned to the Los Angeles D-Fenders by the Lakers and was recalled the next day. [7] [10] While Steve Blake was injured he became the back up point guard, averaging 20 minutes a game. In his rookie season, Andrew Goudelock averaged 4.4 points in 10.5 minutes per game. [11] Goudelock was waived by the Lakers on October 27, 2012. [12]

On November 2, 2012, he was drafted by the Sioux Falls Skyforce of the NBA Development League. [13] On January 3, 2013, he was traded to the Rio Grande Valley Vipers in a three-way trade also involving Erie BayHawks. [14] On February 4, Goudelock was named to the Prospects All-Star roster for the 2013 D-League All-Star Game. [15] However, due to injury, he was replaced by Travis Leslie. [16]

On April 14, 2013, Goudelock re-signed with the Los Angeles Lakers after Kobe Bryant suffered a season-ending Achilles tendon injury. [17] [18] He had just signed with Puerto Rico's Cangrejeros de Santurce, [19] but turned around with the Lakers' offer. Goudelock afterwards played 6 minutes in the Lakers' final game of the season against the Houston Rockets, and another 6 in the second game of the playoffs against the San Antonio Spurs. [20]

On April 25, Goudelock was named the 2012–13 NBA Development League Most Valuable Player Award for his earlier play with Rio Grande Valley and Sioux Falls. [21] With Lakers guards Steve Nash, Steve Blake, and Jodie Meeks also out with injuries, Goudelock started with fellow second-year guard Darius Morris in Game 3 of the first round of the 2013 playoffs against the San Antonio Spurs. [22] In his first playoff start, Goudelock scored a career-high 20 points, but the Lakers lost 120–89 for their worst home playoff loss in franchise history. [23] In Game 4, Goudelock scored 14 points in an 82–103 defeat that eliminated the Lakers. [24] The guard said, "We basically threw a team together", but considered his NBA call-up a learning experience. [25]

In May 2015, he was selected to the All-EuroLeague Second Team for the performances he put up over the season. [39] Fenerbahçe also advanced to the EuroLeague Final Four for the first time in the team's history. [40] On May 15, 2015, however, they lost in the 2015 Euroleague Final Four semifinal game to Real Madrid, by a score of 87–96. [41] Goudelock led his team with 26 points, 6 rebounds, and 4 assists in the semifinal. Eventually, Fenerbahçe finished the Final Four in 4th place, after losing in the third-place game to CSKA Moscow, by a score of 80–86. [42] In the third-place game, Goudelock once again led his team in scoring, with 24 points on 10 of 15 shooting from the field. Goudelock finished his first EuroLeague season with the averages of 17 points, 2.2 rebounds, and 2.1 assists per game, over 29 games played. Being the team's leader in scoring, he scored 20 or more points eleven times during the Euroleague 2014–15 season.

On June 17, 2015, Fenerbahçe's team manager, Ömer Onan, confirmed that Goudelock would not play for the Turkish team in the next season. [43] Goudelock later stated to the media that he had personally wanted to stay with Fenerbahçe, and play with them in the next season, but that the team did not want him back, and declined to pick up the option for another year in his contract. [44]

On June 15, 2018, Goudelock went to win his first Italian title ever with Milano by beating Dolomiti Energia Trento in game 6 of the 2018 LBA Finals. [53] He was named MVP in the league's Finals series of the playoffs. [54]

On July 23, 2018, Goudelock returned to China for a second stint, signing with the Shandong Golden Stars. [55] In 19 games played for Shandong, he averaged 23.2 points and 3.3 assists per game, while shooting 44.3 percent from three-point range.

He is the son of Marvin and Angela Austin. He majored in sociology at the College of Charleston. [1]

Tarence Anthony Kinsey is an American professional basketball player for Orlandina Basket of the Serie A2 Basket. He played college basketball for University of South Carolina. 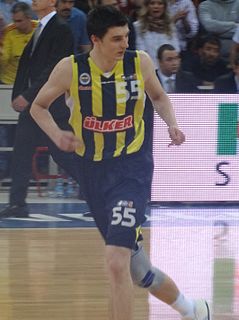 Emir Preldžić is a Bosnian-Turkish professional basketball player who last played for Orlovik Žepče of the A2 League of FBiH, third level of basketball in Bosnia and Herzegovina. He also represented the Turkish national basketball team. He is 6 ft 9 in tall and he mainly plays the small forward position, but he also has the ability to play as a power forward, shooting guard and point guard. 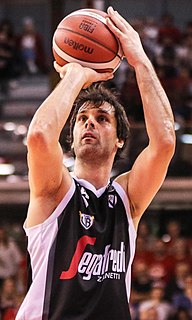 Miloš Teodosić is a Serbian professional basketball player for Virtus Bologna of the Italian Lega Basket Serie A. He also represents the National Basketball Team of Serbia internationally. He primarily plays the point guard and guard shooting guard positions. He is a six time All-EuroLeague selection, and was voted EuroLeague MVP in 2010.

Jason Carlton Thompson is an American professional basketball player for the Wisconsin Herd of the NBA G League. He was a starting center playing college basketball for the Rider Broncs from 2004 to 2008, and was drafted in the first round of the 2008 NBA draft by the Sacramento Kings.

Luigi "Gigi" Datome is an Italian professional basketball player for Olimpia Milano of the Lega Basket Serie A (LBA) and the EuroLeague. Standing at 2.03 m, he plays at the small forward and power forward positions. Datome was an All-EuroLeague Second Team selection in 2016.

Devin Michael Smith is an American former professional basketball player who last played for Maccabi Tel Aviv of the Israeli Super League. Standing at a height of 6 ft 6 in (1.98 m), he played mainly at the small forward position, and he was an All-EuroLeague Second Team selection in 2015. For the 2018–19 NBA season, Smith was a player development coach for the Phoenix Suns.

Lester "Bo" McCalebb is an American-Macedonian former professional basketball player who last played for Tecnyconta Zaragoza of the Spanish Liga ACB. He represents the senior Macedonian national team internationally. Standing at 1.83 m, he plays at the point guard position. Born and raised in New Orleans, he attended the University of New Orleans. A two-time All-EuroLeague selection, McCalebb was part of the All-Tournament Team at EuroBasket 2011. 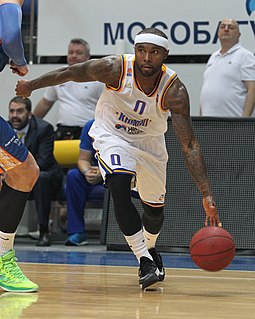 Jan Veselý is a Czech professional basketball player for Fenerbahçe of the Turkish Basketball Super League (BSL) and the EuroLeague. Standing at 2.13 m, he can play both the power forward and center positions. He was selected sixth overall in the 2011 NBA draft by the Washington Wizards. Veselý is a Three-time All-EuroLeague First Team selection. 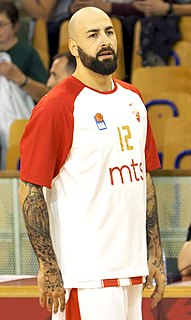 Pero Antić (Macedonian: Перо Антиќ, pronounced [ˈpɛrɔ ˈantic];, is a Macedonian basketball executive and former professional player. He currently serves as a president of the Basketball Federation of North Macedonia.

Nando Bruno Alfred Andre de Colo is a French professional basketball player for Fenerbahçe of the Turkish Basketball Super League (BSL) and the EuroLeague. Standing at a height of 6 ft 5 in (1.96 m), he plays at the point guard and shooting guard positions. A six-time All-EuroLeague selection, de Colo won the EuroLeague title in 2016 and 2019 with CSKA Moscow, earning both the EuroLeague MVP and Final Four MVP awards in the process.

Gustavo Alfonso Ayón Aguirre is a Mexican professional basketball player for Capitanes de Arecibo of the Baloncesto Superior Nacional (BSN). He also represents the senior Mexican national basketball team in international national team competitions. Standing at a height of 6 ft 10 in (2.08 m), he plays at the center position. Ayon is a two−time All-EuroLeague Second Team selection.

Nemanja Bjelica is a Serbian professional basketball player for the Golden State Warriors of the National Basketball Association (NBA). He also represents the senior Serbian national basketball team internationally. Bjelica was an All-Euroleague First Team selection as well as the Euroleague MVP in 2015. Bjelica started his NBA career as a 27-year-old rookie when he signed in 2015 and played for the Minnesota Timberwolves for three seasons before signing with the Sacramento Kings in the 2018 off-season. 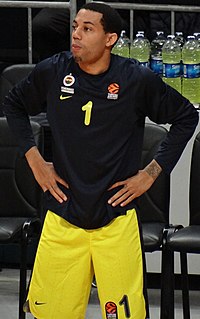 Erick O'Brien Green is an American professional basketball player for the Zhejiang Golden Bulls of the Chinese Basketball Association. He finished the 2012–13 NCAA Division I season as the top scorer in the nation at 25.0 points per game. Green was selected by the Utah Jazz with the 46th overall pick in the 2013 NBA draft, but was later traded to the Denver Nuggets. 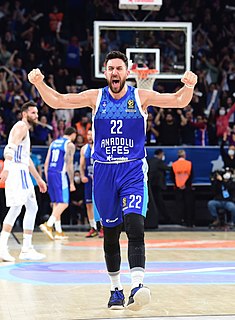 Vasilije Micić is a Serbian professional basketball player for Anadolu Efes of the Turkish Basketball Super League and the EuroLeague. He also represents the Serbian national basketball team internationally. He was selected by the Philadelphia 76ers with the 52nd overall pick in the 2014 NBA draft.

Nikola Kalinić is a Serbian professional basketball player for Crvena zvezda of the Adriatic League and the EuroLeague.. He also represented the senior Serbian national basketball team internationally. He is a 2.03 m tall small forward. He is often considered as a best player on small forward position in the European basketball. 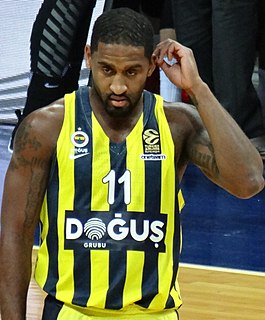 Bradley Daniel Wanamaker is an American professional basketball player who last played for the Washington Wizards of the National Basketball Association (NBA). He played college basketball at the University of Pittsburgh. Wanamaker earned an All-EuroLeague Second Team selection in 2017. 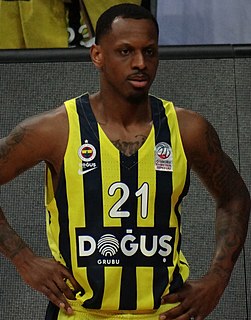 James William Nunnally is an American professional basketball who plays for Maccabi Tel Aviv B.C. of the Israeli Basketball Premier League and the Euroleague. He played college basketball for the UC Santa Barbara Gauchos.