He built a horologion at Athens, the so-called Tower of the Winds, a considerable portion of which still exists. It is octagonal, with figures carved on each side, representing the eight principal winds. [1] In antiquity a bronze figure of Triton on the summit, with a rod in his hand, turned round by the wind, pointed to the quarter from which it blew. From this model is derived the custom of placing weather cockorolls on steeples. [2]

Andronikos II Palaiologos, usually Latinized as Andronicus II Palaeologus, reigned as Byzantine Emperor from 1282 to 1328. Andronikos' reign was marked by the beginning of the decline of the Byzantine Empire. During his reign, the Turks conquered most of the Western Anatolian territories of the Empire and, during the last years of his reign, he also had to fight his grandson Andronikos in the First Palaiologan Civil War. The civil war ended in Andronikos II's forced abdication in 1328 after which he retired to a monastery.

Andronicus of Rhodes was a Greek philosopher from Rhodes who was also the scholarch (head) of the Peripatetic school. He is most famous for publishing a new edition of the works of Aristotle that forms the basis of the texts that survive today.

Theodoret of Cyrus or Cyrrhus was an influential theologian of the School of Antioch, biblical commentator, and Christian bishop of Cyrrhus (423–457). He played a pivotal role in several 5th-century Byzantine Church controversies that led to various ecumenical acts and schisms. He wrote against Cyril of Alexandria's 12 Anathemas which were sent to Nestorius and did not personally condemn Nestorius until the Council of Chalcedon. His writings against Cyril were included in the Three Chapters Controversy and were condemned at the Second Council of Constantinople. Some Chalcedonian and East Syriac Christians regard him as a "full" saint. Although the Eastern Orthodox Protopresbyter Michael Pomazansky repeatedly refers to him as "Blessed", there is no evidence in his work that this is the official position of any Eastern Orthodox jurisdiction. Hieromonk Seraphim Rose also refers to Theodoret as "Blessed" in his book The Place of Blessed Augustine in the Orthodox Church while explaining the nature of the term "Blessed" in the Russian Orthodox Church, referring to how both Sts. Augustine and Jerome are referred to as "Blessed" too despite being part of the Orthodox Saints Calendar.

Cocytus or Kokytos is a river in the underworld in Greek mythology. Cocytus flows into the river Acheron, on the other side of which lies Hades, The Underworld, the mythological abode of the dead. There are five rivers encircling Hades: the Styx, Phlegethon, Lethe, Acheron and Cocytus.

Nicephorus Gregoras was a Byzantine astronomer, historian, and theologian. 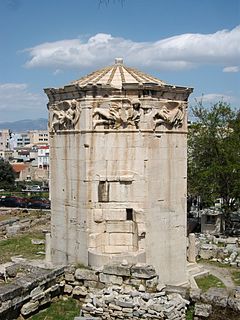 The Tower of the Winds or the Horologion of Andronikos Kyrrhestes is an octagonal Pentelic marble clocktower in the Roman Agora in Athens that functioned as a horologion or "timepiece". It is considered the world's first meteorological station. Unofficially, the monument is also called Aerides, which means Winds. The structure features a combination of sundials, a water clock, and a wind vane. It was supposedly built by Andronicus of Cyrrhus around 50 BC, but according to other sources, might have been constructed in the 2nd century BC before the rest of the forum. In summer of 2014, the Athens Ephorate of Antiquities began cleaning and conserving the structure; restoration work was completed in August 2016.

Isabella of Austria, also known as Elizabeth, Archduchess of Austria and Infanta of Castile and Aragon, was Queen of Denmark, Norway and Sweden as the consort of King Christian II. She was the daughter of King Philip I and Queen Joanna of Castile and the sister of Emperor Charles V. She was born at Brussels. She served as regent of Denmark in 1520.

The arghul, also spelled argul, arghoul, arghool, argol, or yarghul, is a musical instrument in the reed family. It has been used since Ancient Egyptian times and is still used as a traditional instrument in Egypt and Palestine.

Teck was a ducal castle in the kingdom of Württemberg, immediately to the north of the Swabian Jura and south of the town of Kirchheim unter Teck. Burg Teck takes its name from the ridge, the Teckberg, 2,544 feet high, which it crowned. It was destroyed in the German Peasants' War (1525). The castle was reconstructed during the 19th and 20th centuries.

Apellicon, a wealthy man from Teos, afterwards an Athenian citizen, was a famous book collector of the 1st century BC.

Edward Ravenscroft was an English dramatist who belonged to an ancient Flintshire family. 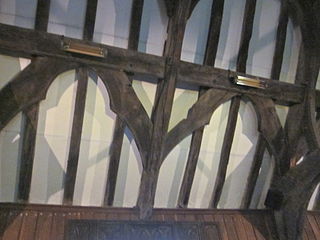 In architecture, wind braces are diagonal braces to tie the rafters of a roof together and prevent racking. In medieval roofs they are arched, and run from the principal rafters to catch the purlins.

A discharging arch or relieving arch is an arch built over a lintel or architrave to take off the superincumbent weight. 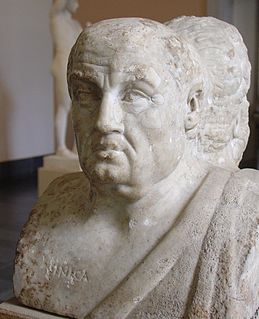 Senecan tragedy refers to a set of ancient Roman tragedies. Ten of these plays exist, of which most likely eight were written by the Stoic philosopher and politician Lucius Annaeus Seneca. The group includes Hercules Furens, Medea, Troades, Phaedra, Agamemnon, Oedipus, Phoenissae, Thyestes, Hercules Oetaeus, and Octavia. Hercules Oetaeus is generally considered not to have been written by Seneca, and Octavia is certainly not. In the mid-16th century, Italian humanists rediscovered these works, making them models for the revival of tragedy on the Renaissance stage. The two great, but very different, dramatic traditions of the age—French neoclassical tragedy and Elizabethan tragedy—both drew inspiration from Seneca. Usually, the Senecan tragedy focuses heavily on supernatural elements.

Enceinte is a French term denoting the "main defensive enclosure of a fortification". For a castle this is the main defensive line of wall towers and curtain walls enclosing the position. For a settlement it would be the main town wall with its associated gatehouses and towers and walls.

Monteu da Po is a small comune in the Metropolitan City of Turin, Piedmont, Italy, 32 km north-east of Turin.

Cyrrhus is a city in ancient Syria founded by Seleucus Nicator, one of Alexander the Great's generals. Other names for the city include Hagioupolis, Nebi Huri, Khoros. A false etymology of the sixth century connects it to Cyrus, king of Persia due to the resemblance of the names. The former Roman/Byzantine (arch)bishopric is now a double Catholic titular see. 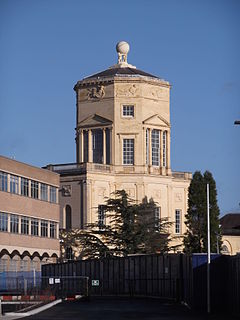 The Tower of the Winds is the prominent octagonal tower on top of the old Radcliffe Observatory building in Oxford, England. The building now forms a centrepiece for Green Templeton College, one of the colleges of Oxford University.