Andronikos Doukas was son of the Caesar John Doukas and Eirene Pegonitissa. His father was a brother of Emperor Constantine X Doukas. His maternal grandfather was Niketas Pegonites. Andronikos himself was a first cousin of Michael VII Doukas.

In 1071 Andronikos was the commander of a section of the Byzantine army in the campaign of Romanos IV Diogenes against the Seljuk Turks of Alp Arslan. Commanding the rearguard of the army during the Battle of Manzikert, Andronikos announced that the emperor had been cut down and deserted from the battlefield. He was widely blamed for causing the crushing defeat of the Byzantine forces and the subsequent capture of Romanos IV by the enemy.

In 1072, after Romanos had been released by Alp Arslan, Andronikos and his brother Constantine were sent out by Michael VII and their father the Caesar John to intercept him. They defeated Romanos and hunted him down in Cilicia. It was Andronikos who finally obtained Romanos' surrender and conducted him towards Constantinople. In spite of his former hatred for the deposed emperor, Andronikos is said to have opposed his blinding on 29 June 1072.

In an act of 1073, he is recorded with his titles as protoproedros , protovestiarios and megas domestikos , which Michael Attaleiates clarifies as being the post of domestikos ton scholon of the East, which he had been given when sent against Diogenes. [1]

In 1074, together with his father, Andronikos commanded the imperial army against the rebel mercenaries led by Roussel de Bailleul. Both were captured by the rebels, who released the badly wounded Andronikos to allow him to seek proper medical treatment in Constantinople. There he recovered for a few years, but in October 1077 died of an edema.

Alexios I Komnenos, Latinized Alexius I Comnenus, was Byzantine emperor from 1081 to 1118. Although he was not the founder of the Komnenian dynasty, it was during his reign that the Komnenos family came to full power. Inheriting a collapsing empire and faced with constant warfare during his reign against both the Seljuq Turks in Asia Minor and the Normans in the western Balkans, Alexios was able to curb the Byzantine decline and begin the military, financial, and territorial recovery known as the Komnenian restoration. The bases for this recovery were various reforms initiated by Alexios. His appeals to Western Europe for help against the Turks were also the catalyst that contributed to the convoking of the Crusades. 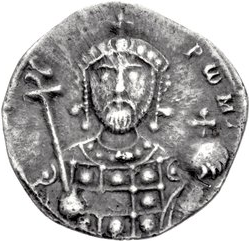 Romanos IV Diogenes, also known as Romanus IV, was a member of the Byzantine military aristocracy who, after his marriage to the widowed empress Eudokia Makrembolitissa, was crowned Byzantine Emperor and reigned from 1068 to 1071. During his reign he was determined to halt the decline of the Byzantine military and to stop Turkish incursions into the Byzantine Empire, but in 1071 he was captured and his army routed at the Battle of Manzikert. While still captive he was overthrown in a palace coup, and when released he was quickly defeated and detained by members of the Doukas family. In 1072, he was blinded and sent to a monastery, where he died of his wounds.

The Battle of Manzikert was fought between the Byzantine Empire and the Seljuk Empire on 26 August 1071 near Manzikert, theme of Iberia. The decisive defeat of the Byzantine army and the capture of the Emperor Romanos IV Diogenes played an important role in undermining Byzantine authority in Anatolia and Armenia, and allowed for the gradual Turkification of Anatolia. Many of the Turks, who had been travelling westward during the 11th century, saw the victory at Manzikert as an entrance to Asia Minor. 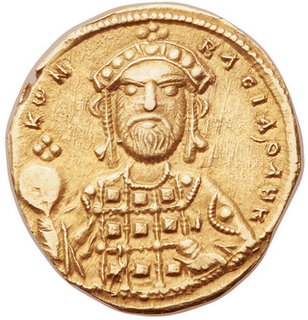 Constantine X Doukas or Dukas, Latinised as Ducas, was Byzantine emperor from 1059 to 1067. He was the founder and first ruling member of the short-lived Doukid dynasty. During his reign, the Normans took over much of the remaining Byzantine territories in Italy while in the Balkans the Hungarians occupied Belgrade. He also suffered defeats by the Seljuk sultan Alp Arslan.

Eudokia Makrembolitissa was a Byzantine empress by her successive marriages to Constantine X Doukas and Romanos IV Diogenes. She acted as regent of her minor sons, Michael VII and Konstantios Doukas, in 1067–68, and resigned her regency by marriage to Romanos IV Diogenes. When he was deposed in 1071, she resumed the regency for her sons, but was forced to resign again.

Anna Dalassene was an important Byzantine noblewoman who played a significant role in the rise to power of the Komnenoi in the eleventh century. As Augusta, a title bestowed upon her by her son, Alexios I Komnenos, rather than his empress-consort she guided the empire during his many absences for long military campaigns against Turkish and other incursions into the Byzantine Empire. As empress-mother, she exerted more influence and power than the empress-consort, Irene Doukaina, a woman whom she hated because of past intrigues with the Doukas family.

John Doukas was the son of Andronikos Doukas, a Paphlagonian Greek nobleman who may have served as governor of the theme of Bulgaria (Moesia), and the younger brother of Emperor Constantine X Doukas. John Doukas was the paternal grandfather of Irene Doukaina, wife of Emperor Alexios I Komnenos.

Maria of Bulgaria was the wife of protovestiarios and domestikos ton scholon Andronikos Doukas and mother of Empress Irene Doukaina.

Constantine Palaiologos or Palaeologus was a Byzantine nobleman and the younger half-brother of the Byzantine Emperor Michael VIII Palaiologos.

John Doukas was a member of the Doukas family, a relative of Byzantine emperor Alexios I Komnenos and a senior military figure of his reign. As governor of Dyrrhachium, he secured the imperial possessions in the western Balkans against the Serbs. Appointed megas doux, he scoured the Aegean of the fleets of the Turkish emir Tzachas, suppressed rebellions in Crete and Cyprus, and then recovered much of the western coast of Anatolia for Byzantium. 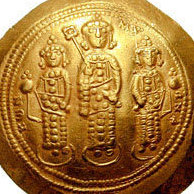 Andronikos Doukas, Latinized as Andronicus Ducas, was the third son of Byzantine emperor Constantine X Doukas and younger brother of Byzantine emperor Michael VII Doukas. Unlike his other brothers, he was not named junior co-emperor by his father, and was raised to the dignity only by Romanos IV Diogenes. He is otherwise relatively insignificant, and was not involved in the affairs of state to any degree.

Theodore Komnenos Doukas Palaiologos Synadenos, usually simply Theodore Synadenos, was a Byzantine magnate, senior official and military leader of the early 14th century, who played an important role in the civil wars of the period. The scion of a noble lineage, he became one of the first and most prominent supporters of Andronikos III Palaiologos in his struggle against his grandfather Andronikos II. Synadenos held various provincial governorships during Andronikos III's reign, including Epirus and Thessalonica. After the outbreak of the civil war of 1341–1347, he tried to surrender Thessalonica to his old friend John Kantakouzenos, but was driven from the city by the Zealots of Thessalonica. Forced to join Kantakouzenos's enemies, he was initially honoured with the high rank of protovestiarios but soon placed under house arrest in Constantinople, where he died impoverished in 1345 or 1346.

Eustathios Argyros was a Byzantine aristocrat and one of the most prominent generals under Emperor Leo VI the Wise. The first member of the Argyros family to rise to high posts, he fought with distinction against the Arabs in the east, before being disgraced ca. 907, possibly in connection with the flight of Andronikos Doukas to the Arabs. Rehabilitated soon after, he was appointed as strategos of Charsianon, from which post he oversaw the settlement of Armenian lords as march-wardens along the Empire's eastern frontier. Promoted to commander of the imperial bodyguard in late 908, he again fell into disgrace shortly after and died of poison on his way to his estates.

Andronikos Komnenos Palaiologos, was a megas domestikos (commander-in-chief) of the Empire of Nicaea and the father of the Byzantine emperor Michael VIII Palaiologos, the founder of the Palaiologan dynasty. 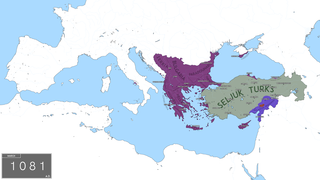 The Byzantine Empire was ruled by emperors of the Doukas dynasty between 1059 and 1081. There are six emperors and co-emperors of this period: the dynasty's founder, Emperor Constantine X Doukas, his brother John Doukas, katepano and later Caesar, Romanos IV Diogenes, Constantine's son Michael VII Doukas, Michael's son and co-emperor Constantine Doukas, and finally Nikephoros III Botaneiates, who claimed descent from the Phokas family.

Manuel Komnenos was a Byzantine aristocrat and military leader, the oldest son of John Komnenos and brother of the future emperor Alexios I Komnenos. A relative by marriage of Emperor Romanos IV Diogenes, he was placed in charge of expeditions against Turkish raids from 1070, until his sudden death by illness in April 1071.