The idea of an ice racing series first became an idea when professional racer Max Mamers (French Rallycross Champion 1982 and 1983 with Talbot Matra Murena) and the owner of the Andros company (jam and compote producers), Frédéric Gervoson, met as rugby fans in 1985. They spent the winter racing with friends on ice circuits.

On 27 January 1990, the idea of a series came to life at Serre Chevalier with the first round of four.

The series quickly grew, with a round at Paris (Pelouse de Reuilly) in 1991 creating a five round series; and a seven round championship in 1992.

In 2003, the trophy gained an international aspect with a race at Sherbrooke in Canada, a race that was held for three seasons. For the 2005/06 season, the trophy remained mainly national, the exception being one round held in Andorra.

The series now runs with a number of different races and classes.

This is the original and highest class, featuring the most prominent names.

Starting in 1994 (named Promotion), this class is for the smaller teams, encouraging them to take part in the Trophée Andros. To partake in this class, there are three conditions: the drivers cannot have finished in the top 20 over the general classification; must never have participated in the Elite Pro Class; and cannot be a professional driver.

The motorbike races for the Andros Trophy first appeared at the 1996 championship final at Super Besse, after an idea of Mamers and Claude Michy. It became a series in its own right in the 1997/98 season with a race at every round from that point.

Created in 2002, this series combined two categories. The 600cc 6-speed buggy-styled car was shared between a female driver and an experienced driver, who also was the instructor for the female driver. They competed in two different races at each weekend they attended. The Féminin trophy was discontinued as of 2011, with some of the female drivers from the series moving into other categories of the trophée including the main series and the electric cars.

The series always attracts names who were famous in other series before moving to ice racing – including Formula One drivers Olivier Panis, Romain Grosjean and Jacques Villeneuve.

On 14 February 1999, the series held a "Superfinal" at the Stade de France in Saint-Denis, on the outskirts of Paris. Using 700 tonnes of ice, an oval track was established around the edge of the stadium, allowing for racing in front of around 60,000 people, with no championship points at stake.

In 2005 the races were held at Saint-Dié-des-Vosges, and once again at the Stade de France in 2006, 2008 and 2011. Various other locations have been used, but in recent years the Superfinal was almost always raced at Clermont / Super Besse.

The title for the dame was awarded in to best women in a selected class in each season.

Andrew Graham Priaulx, MBE is a British professional racing driver from Guernsey. In 2019 he raced for Ford Chip Ganassi Team UK in the FIA World Endurance Championship, and Cyan Racing Lynk & Co in the FIA World Touring Car Cup, having been a former BMW factory driver. 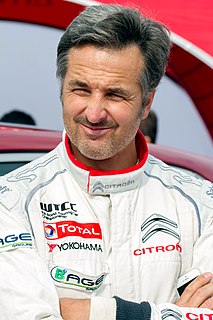 Yvan Muller is a French auto racing driver most noted for success in touring car racing. He is a four-time World Touring Car Champion, winning the title in 2008 with SEAT, in 2010 and 2011 with Chevrolet and in 2013 with RML.

Éric Hélary is a professional racing driver from Paris. His career has encompassed single seater formulae, endurance sports car racing, and touring cars. He won the French Formula Three Championship in 1990 and is best known for his win at the 24 Hours of Le Mans in 1993. He was champion 2011 of Euro Racecar. 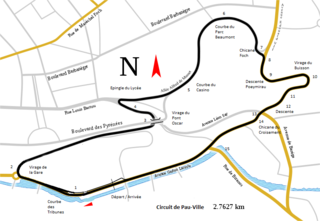 Michael Bentwood is a British auto racing driver. After starting racing in Karting, he entered the 1994 Formula First Winter Series, finishing the season in tenth. In 1995 he finished fifth in the Formula Vauxhall Junior Winter Series. He then spent four years between 1997-2000 in the British Formula 3 Class A Championship where he finished the highest placed British driver in the year 2000; winning the Raymond Mays Trophy and the BRDC Spencer Charrington Trophy. He was also awarded BRDC membership. He was proposed by Johnny Herbert and second by John Cardwell. The years of ultra competitive Formula 3 were followed in 2001 with a drive in the Euro Formula 3000 Series where he finished the season in twelfth place with a handful of top six finishes.

The 2009 Guia Race of Macau was the twelfth and final round of the 2009 World Touring Car Championship season. It was the fifth running of the Guia Race of Macau as a World Touring Car Championship round. It was held on 22 November 2009 on the temporary Guia Circuit around the streets of Macau. The race was part of the Macau Grand Prix weekend, headlined by the Formula Three event. 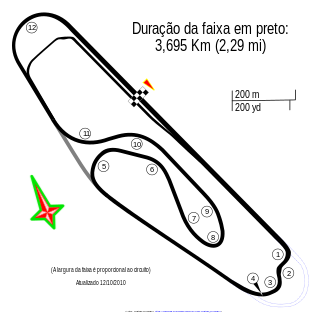 The 2012 FIA WTCC Race of Brazil was the eighth round of the 2012 World Touring Car Championship season and the seventh running of the FIA WTCC Race of Brazil. It was held on 22 July 2012 at the Autódromo Internacional de Curitiba in Pinhais, Brazil. Both races were won by Chevrolet with Yvan Muller winning race one and Robert Huff winning race two.

Jean-Philippe Dayraut is a French auto racing driver. He has won the Andros Trophy ice racing championship fours times between 2009 and 2013. Also, he developed the Mitjet silhouette racecars and is manager of the Circuit d’Albi.

Alexandre Cougnaud is a French racing driver. who currently competes in the European Le Mans Series with Graff Racing.

Evens Stievenart is a French racing driver with significant experience in ice racing on the Andros Trophy Series. Sports enthusiast, he has recorded 3 victories at the 24 Hours of Le Mans; 2 on its solo cycling version in 2016 and 2017 and one on its Classic car version in 2018.

The 2015–16 Andros Trophy is the 26th season of the Andros Trophy, a motor racing championship for automobile ice racing and motorcycle ice racing held in France and Andorra. The season begins in Val Thorens on 5 December 2015 and finishes on 13 February 2016 in Saint-Dié-des-Vosges.

The 2016–17 Andros Trophy is the 27th season of the Andros Trophy, a motor racing championship for automobile ice racing and motorcycle ice racing held in France and Andorra. The season began in Val Thorens on 3 December 2016 and finished on 28 January 2017 at Super Besse.

The 2017–18 Andros Trophy was the twenty-eighth season of the Andros Trophy, a motor racing championship for automobile ice racing and motorcycle ice racing held in France and Andorra. The season began in Val Thorens on 2 December 2017 and finished on 3 February 2018 at Super Besse. Jean-Baptiste Dubourg was the defending Elite Pro Drivers' champion.

The 2018–19 Andros Trophy was the twenty-ninth season of the Andros Trophy, a motor racing championship for automobile ice racing and motorcycle ice racing held in France and Andorra. The season began in Val Thorens on 8 December 2018 and finished on 9 February 2019 in the Stade de France stadium. Jean-Baptiste Dubourg was the defending Elite Pro Drivers' champion.