Angela Olive Pearce (formerly Carter, née Stalker; 7 May 1940 – 16 February 1992), who published under the name Angela Carter, was an English novelist, short story writer, poet, and journalist, known for her feminist, magical realism, and picaresque works. She is best known for her book The Bloody Chamber , which was published in 1979. In 2008, The Times ranked Carter tenth in their list of "The 50 greatest British writers since 1945". [1] In 2012, Nights at the Circus was selected as the best ever winner of the James Tait Black Memorial Prize. [2]

Born Angela Olive Stalker in Eastbourne, in 1940, to Sophia Olive (née Farthing; 1905–1969), a cashier at Selfridge's, and journalist Hugh Alexander Stalker (1896–1988), [3] Carter was evacuated as a child to live in Yorkshire with her maternal grandmother. [4] After attending Streatham and Clapham High School, in south London, she began work as a journalist on The Croydon Advertiser , [5] following in her father's footsteps. Carter attended the University of Bristol where she studied English literature. [6] [7]

She married twice, first in 1960 to Paul Carter, [5] divorcing in 1972. In 1969, she used the proceeds of her Somerset Maugham Award to leave her husband and relocate for two years to Tokyo, where she claims in Nothing Sacred (1982) that she "learnt what it is to be a woman and became radicalised". [8] She wrote about her experiences there in articles for New Society and a collection of short stories, Fireworks: Nine Profane Pieces (1974), and evidence of her experiences in Japan can also be seen in The Infernal Desire Machines of Doctor Hoffman (1972).

She then explored the United States, Asia and Europe, helped by her fluency in French and German. She spent much of the late 1970s and 1980s as a writer in residence at universities, including the University of Sheffield, Brown University, the University of Adelaide, and the University of East Anglia. In 1977, Carter met Mark Pearce, with whom she had one son and whom she married shortly before her death. [9] In 1979, both The Bloody Chamber , and her feminist essay, The Sadeian Woman and the Ideology of Pornography , [10] appeared. In the essay, according to the writer Marina Warner, Carter "deconstructs the arguments that underlie The Bloody Chamber. It's about desire and its destruction, the self-immolation of women, how women collude and connive with their condition of enslavement. She was much more independent-minded than the traditional feminist of her time." [11]

As well as being a prolific writer of fiction, Carter contributed many articles to The Guardian , The Independent and New Statesman , collected in Shaking a Leg. [12] She adapted a number of her short stories for radio and wrote two original radio dramas on Richard Dadd and Ronald Firbank. Two of her fictions have been adapted for film: The Company of Wolves (1984) and The Magic Toyshop (1967). She was actively involved in both adaptations; [13] her screenplays are published in the collected dramatic writings, The Curious Room , together with her radio scripts, a libretto for an opera of Virginia Woolf's Orlando: A Biography , an unproduced screenplay entitled The Christchurch Murders (based on the same true story as Peter Jackson's Heavenly Creatures ) and other works. These neglected works, as well as her controversial television documentary, The Holy Family Album , are discussed in Charlotte Crofts' book, Anagrams of Desire (2003). Her novel Nights at the Circus won the 1984 James Tait Black Memorial Prize for literature. Her last novel, Wise Children , is a surreal wild ride through British theatre and music hall traditions.

Carter died aged 51 in 1992 at her home in London after developing lung cancer. [14] [15] At the time of her death, she had started work on a sequel to Charlotte Brontë's Jane Eyre based on the later life of Jane's stepdaughter, Adèle Varens; only a synopsis survives. [16]

English Heritage unveiled a blue plaque at Carter's final home at 107, The Chase in Clapham, South London in September 2019. She wrote many of her books in the sixteen years she lived at the address, as well as tutoring the young Kazuo Ishiguro. [17]
In 2008, the British Library acquired the Angela Carter Papers, a large collection of 224 files and volumes containing manuscripts, correspondence, personal diaries, photographs and audio cassettes. [18] 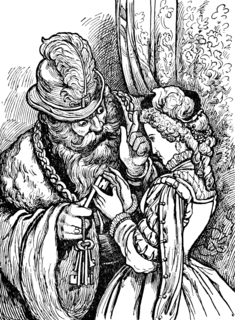 "Bluebeard" is a French folktale, the most famous surviving version of which was written by Charles Perrault and first published by Barbin in Paris in 1697 in Histoires ou contes du temps passé. The tale tells the story of a wealthy man in the habit of murdering his wives and the attempts of one wife to avoid the fate of her predecessors. "The White Dove", "The Robber Bridegroom" and "Fitcher's Bird" are tales similar to "Bluebeard". The notoriety of the tale is such that Merriam-Webster gives the word "Bluebeard" the definition of "a man who marries and kills one wife after another". The verb "bluebearding" has even appeared as a way to describe the crime of either killing a series of women, or seducing and abandoning a series of women.

Werewolf fiction denotes the portrayal of werewolves and other shapeshifting man/woman-beasts, in the media of literature, drama, film, games and music. Werewolf literature includes folklore, legend, saga, fairy tales, Gothic and horror fiction, fantasy fiction and poetry. Such stories may be supernatural, symbolic or allegorical. A classic American cinematic example of the theme is The Wolf Man (1941) which in later films joins with the Frankenstein Monster and Count Dracula as one of the three famous icons of modern day horror. However, werewolf fiction is an exceptionally diverse genre, with ancient folkloric roots and manifold modern re-interpretations.

The Bloody Chamber is a collection of short fiction by English writer Angela Carter. It was first published in the United Kingdom in 1979 by Gollancz and won the Cheltenham Festival Literary Prize. The stories share a theme of being closely based upon fairytales or folk tales. However, Carter has stated:

My intention was not to do 'versions' or, as the American edition of the book said, horribly, 'adult' fairy tales, but to extract the latent content from the traditional stories. 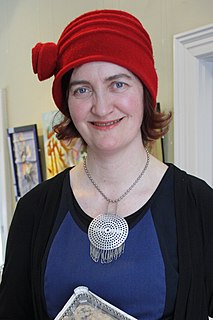 Emma Donoghue is an Irish-Canadian playwright, literary historian, novelist, and screenwriter. Her 2010 novel Room was a finalist for the Man Booker Prize and an international best-seller. Donoghue's 1995 novel Hood won the Stonewall Book Award and Slammerkin (2000) won the Ferro-Grumley Award for Lesbian Fiction. She is a 2011 recipient of the Alex Awards. Room was adapted by Donoghue into a film of the same name. For this, she was nominated for the Academy Award for Best Adapted Screenplay.

The Company of Wolves is a 1984 British gothic fantasy horror film directed by Neil Jordan and starring Sarah Patterson, Angela Lansbury, Stephen Rea and David Warner. The screenplay was written by Jordan and Angela Carter, and adapted by Carter from her short story of the same name and its 1980 radio adaptation. Carter's first draft of the screenplay, which contains some differences from the finished film, has been published in her anthology The Curious Room (1996). 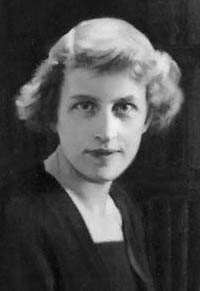 Winifred Holtby was an English novelist and journalist, now best known for her novel South Riding, which was posthumously published in 1936.

The Magic Toyshop (1967) is a British novel by Angela Carter. It follows the development of the heroine, Melanie, as she becomes aware of herself, her environment, and her own sexuality. 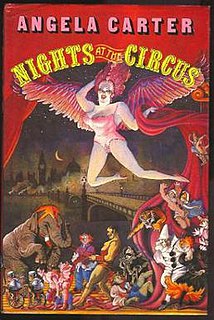 Nights at the Circus is a novel by British writer Angela Carter, first published in 1984 and the winner of the 1984 James Tait Black Memorial Prize for fiction. The novel focuses on the life and exploits of Sophie Fevvers, a woman who is – or so she would have people believe – a Cockney virgin, hatched from an egg laid by unknown parents and ready to develop fully fledged wings. At the time of the story, she has become a celebrated aerialiste, and she captivates the young journalist Jack Walser, who runs away with the circus and falls into a world that his journalistic exploits had not prepared him to encounter. 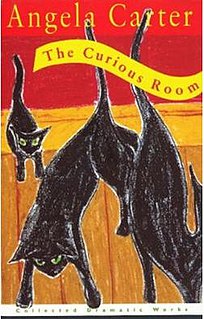 The Curious Room (ISBN 0-09-958621-5) is a book collecting various plays and scripts by English writer Angela Carter. Its full title is The Curious Room: Plays, Film Scripts and an Opera.

Burning Your Boats: The Collected Short Stories (1995) is a posthumously-published collection of short stories by English writer Angela Carter. It includes stories previously collected in her other short story collections: Fireworks: Nine Profane Pieces (1974), The Bloody Chamber and Other Stories (1979), Black Venus (1985) and American Ghosts and Old World Wonders (1993) as well as six previously un-collected stories. The book also includes an introduction by author Salman Rushdie. 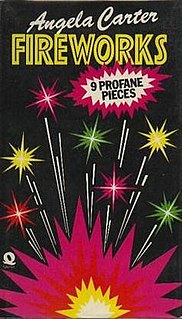 Fireworks: Nine Profane Pieces is an anthology of short fiction by Angela Carter. It was first published in the United Kingdom in 1974 by Quartet Books Ltd. and contains a collection stories, several of which are based on Carter's own experiences of living in Japan from 1969 to 1971. This period of her life can be counted as a turning point in terms of her writing as it marks the point at which feminism began to become a more central theme; as she notes herself in Nothing Sacred: Selected Writings, "In Japan I learnt what it is to be a woman and became radicalised". In 1988 it was also published in Canada under the name "Artificial Fire" which featured both Fireworks and the 1971 novel Love.

The Sadeian Woman and the Ideology of Pornography is a 1978 non-fiction book by Angela Carter. The book is a feminist re-appraisal of the work of the Marquis de Sade, consisting of a collection of essays analyzing his literature, particularly the tales of sisters Juliette and Justine.

Feminist revisionist mythology is feminist literature informed by feminist literary criticism, or by the politics of feminism more broadly and that engages with mythology, fairy tales, religion, or other areas.

Evelyn's Sharp's short story "The Wonderful Toymaker" is part of a collection of fairy tales in the book, All the Way to Fairyland: Fairy Stories. The Cambridge University Press originally published the anthology in 1897. An EBook version was made available through The Project Gutenberg on 3 November 2009.

Sophie Mackintosh is a British novelist and short story writer. Her debut novel, The Water Cure, was nominated for the 2018 Man Booker Prize. 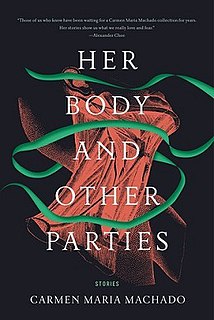 Her Body and Other Parties is a 2017 short story collection by the writer Carmen Maria Machado, published by Graywolf Press. The collection won the Shirley Jackson Award, and was a finalist for the National Book Award for Fiction. The story "The Husband Stitch" was nominated for the Nebula Award for Best Novelette.

Wikiquote has quotations related to Angela Carter .
This page is based on this Wikipedia article
Text is available under the CC BY-SA 4.0 license; additional terms may apply.
Images, videos and audio are available under their respective licenses.