He was born in Codogno, and died in Milan. He was a pupil of Francesco Hayez at the Academy of Fine Arts in Milan. In 1879, he sent to the Exhibition of Parma an oil canvas depicting Lucrezia Borgia che d'accordo col fratello Duca Valentino, avvelena l'anfora preparata pel marito, duca d'Aragona. At the 1872 Exhibition of Milan, he exhibited an allegorical figure depicting Sacred Music. [2] 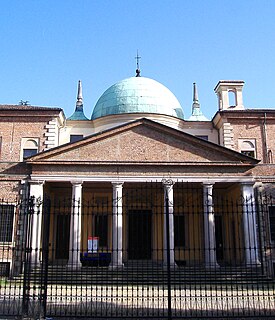 Codogno is a town and comune of 15,868 inhabitants in the province of Lodi, Lombardy, northern Italy. It is the main center of the plain known as Basso Lodigiano, which has about 90,000 inhabitants. It received the honorary title of city with a presidential decree on June 26, 1955.

He painted frescoes for the interior of the church of the Incoronata in Lodi, and the Villa Oppenheim-Cora in Florence, Italy. He also painted the allegorical figure of Europa in one of the four lunettes of the octagon in the Galleria Vittorio Emanuele in Milan. [3] He painted a Pico della Mirandola in the presence of Lorenzo de' Medici for the Royal Palace at Milan. [4]

The Tempio Civico della Beata Vergine Incoronata is a church in Lodi, Lombardy, Italy. It is considered one of the masterworks of the Lombard Renaissance art. The church was designed in 1488 by Giovanni Battagio, continued by Gian Giacomo Dolcebuono and finished by Giovanni Antonio Amadeo, and built at expenses of the Lodi commune, whence the denomination "Civico" ("Municipal"), on the site previously occupied by a brothel. 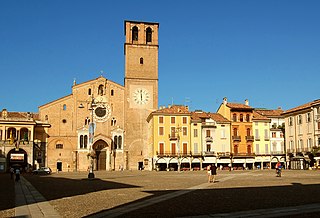 Lodi is a city and comune in Lombardy, northern Italy, on primarily on the western bank of the River Adda. It is the capital of the province of Lodi.

Lorenzo de' Medici was an Italian statesman, de facto ruler of the Florentine Republic and the most powerful and enthusiastic patron of Renaissance culture in Italy. Also known as Lorenzo the Magnificent by contemporary Florentines, he was a magnate, diplomat, politician and patron of scholars, artists and poets. As a patron, he is best known for his sponsorship of artists such as Botticelli and Michelangelo. He held the balance of power within the Italic League, an alliance of states that stabilized political conditions on the Italian peninsula for decades, and his life coincided with the mature phase of the Italian Renaissance and the Golden Age of Florence. The Peace of Lodi of 1454 that he helped maintain among the various Italian states collapsed with his death. He is buried in the Medici Chapel in Florence.

He was buried in the Monumental Cemetery of Milan, where Odoardo Tabacchi completed his bust. [5]

Odoardo Tabacchi was an Italian sculptor.

Italia turrita is the national personification or allegory of Italy, characterised by a mural crown typical of Italian civic heraldry of Medieval communal origin. In broader terms, the crown symbolizes its mostly urban history. She often holds in her hands a bunch of corn ears ; during the fascist era, she held a bundle of fasces.

Stefano Ussi was an Italian painter, known first for his history paintings, and later for depicting Orientalist, mostly Arabian and Moroccan subjects.

Francesco Mancini was an Italian painter.

Ruggero Panerai was an Italian painter.

Fosco Tricca was an Italian painter.

Paolo Sala was an Italian painter, mainly of vedute and genre scenes. He often painted dal vero, that is, en plein air. He was also known for his ability to paint animals in rural scenes. He founded the Lombard association of watercolor painters in 1911.

Pio Sanquirico was an Italian painter.

Vincenzo Severino (1859-1926) was an Italian painter, active mainly in Naples and Rome.

Matteo Tassi was an Italian painter, best known for his decorative frescoes and restorations.

Ponziano Loverini was an Italian painter, known primarily for his canvases and frescoes of sacred subjects.

Alfredo Luxoro was an Italian painter, mainly of landscapes, genre, and orientalist themes.

Carlo Muccioli was an Italian painter, in watercolors and oils, mainly of genre subjects.

Virgilio Ripari ) was an Italian painter, mainly depicting genre scenes of women and flowers. His style is described as a late Romantic, often depicting nuns and scene galanti.

Linda Rocchi was an Italian painter, mainly of watercolors of flowers.