In fluid dynamics, angle of attack (AOA, α, or

) is the angle between a reference line on a body (often the chord line of an airfoil) and the vector representing the relative motion between the body and the fluid through which it is moving. [1] Angle of attack is the angle between the body's reference line and the oncoming flow. This article focuses on the most common application, the angle of attack of a wing or airfoil moving through air.

In aerodynamics, angle of attack specifies the angle between the chord line of the wing of a fixed-wing aircraft and the vector representing the relative motion between the aircraft and the atmosphere. Since a wing can have twist, a chord line of the whole wing may not be definable, so an alternate reference line is simply defined. Often, the chord line of the root of the wing is chosen as the reference line. Another choice is to use a horizontal line on the fuselage as the reference line (and also as the longitudinal axis). [2] Some authors [3] [4] do not use an arbitrary chord line but use the zero lift axis where, by definition, zero angle of attack corresponds to zero coefficient of lift.

Some British authors have used the term angle of incidence instead of angle of attack. [5] However, this can lead to confusion with the term riggers' angle of incidence meaning the angle between the chord of an airfoil and some fixed datum in the airplane. [6]

Relation between angle of attack and lift coefficient

As the angle of attack of a fixed-wing aircraft increases, separation of the airflow from the upper surface of the wing becomes more pronounced, leading to a reduction in the rate of increase of the lift coefficient. The figure shows a typical curve for a cambered straight wing. Cambered airfoils are curved such that they generate some lift at small negative angles of attack. A symmetrical wing has zero lift at 0 degrees angle of attack. The lift curve is also influenced by the wing shape, including its airfoil section and wing planform. A swept wing has a lower, flatter curve with a higher critical angle.

Some aircraft are equipped with a built-in flight computer that automatically prevents the aircraft from increasing the angle of attack any further when a maximum angle of attack is reached, regardless of pilot input. This is called the 'angle of attack limiter' or 'alpha limiter'. Modern airliners that have fly-by-wire technology avoid the critical angle of attack by means of software in the computer systems that govern the flight control surfaces.

In takeoff and landing operations from short runways (STOL), such as Naval Aircraft Carrier operations and STOL backcountry flying, aircraft may be equipped with the angle of attack or Lift Reserve Indicators. These indicators measure the angle of attack (AOA) or the Potential of Wing Lift (POWL, or Lift Reserve) directly and help the pilot fly close to the stalling point with greater precision. STOL operations require the aircraft to be able to operate close to the critical angle of attack during landings and at the best angle of climb during takeoffs. Angle of attack indicators are used by pilots for maximum performance during these maneuvers since airspeed information is only indirectly related to stall behavior.

Additional aerodynamic surfaces known as "high-lift devices" including leading edge wing root extensions allow fighter aircraft much greater flyable 'true' alpha, up to over 45°, compared to about 20° for aircraft without these devices. This can be helpful at high altitudes where even slight maneuvering may require high angles of attack due to the low density of air in the upper atmosphere as well as at low speed at low altitude where the margin between level flight AoA and stall AoA is reduced. The high AoA capability of the aircraft provides a buffer for the pilot that makes stalling the airplane (which occurs when critical AoA is exceeded) more difficult. However, military aircraft usually do not obtain such high alpha in combat, as it robs the aircraft of speed very quickly due to induced drag, and, in extreme cases, increased frontal area and parasitic drag. Not only do such maneuvers slow the aircraft down, but they cause significant structural stress at high speed. Modern flight control systems tend to limit a fighter's angle of attack to well below its maximum aerodynamic limit.[ citation needed ]

In sailing, the physical principles involved are the same as for aircraft. [10] A sail's angle of attack is the angle between the sail's chord line and the direction of the relative wind.

A fluid flowing around the surface of an object exerts a force on it. Lift is the component of this force that is perpendicular to the oncoming flow direction. It contrasts with the drag force, which is the component of the force parallel to the flow direction. Lift conventionally acts in an upward direction in order to counter the force of gravity, but it can act in any direction at right angles to the flow.

A leading-edge extension (LEX) is a small extension to an aircraft wing surface, forward of the leading edge. The primary reason for adding an extension is to improve the airflow at high angles of attack and low airspeeds, to improve handling and delay the stall. A dog tooth can also improve airflow and reduce drag at higher speeds.

In aeronautics, the aspect ratio of a wing is the ratio of its span to its mean chord. It is equal to the square of the wingspan divided by the wing area. Thus, a long, narrow wing has a high aspect ratio, whereas a short, wide wing has a low aspect ratio. 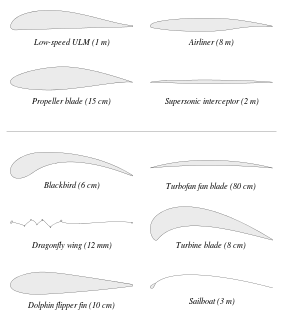 An airfoil or aerofoil is the cross-sectional shape of a wing; blade of a propeller rotor or turbine; or sail as seen in cross-section.

The lift coefficient (CL) is a dimensionless coefficient that relates the lift generated by a lifting body to the fluid density around the body, the fluid velocity and an associated reference area. A lifting body is a foil or a complete foil-bearing body such as a fixed-wing aircraft. CL is a function of the angle of the body to the flow, its Reynolds number and its Mach number. The section lift coefficient cl refers to the dynamic lift characteristics of a two-dimensional foil section, with the reference area replaced by the foil chord. 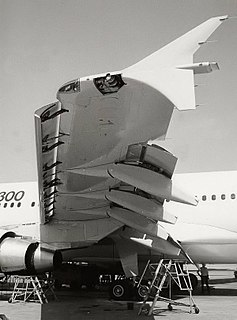 A leading-edge cuff is a fixed aerodynamic wing device employed on fixed-wing aircraft to improve the stall and spin characteristics. Cuffs may be either factory-designed or an after-market add-on modification.

A leading-edge slot is a fixed aerodynamic feature of the wing of some aircraft to reduce the stall speed and promote good low-speed handling qualities. A leading-edge slot is a spanwise gap in each wing, allowing air to flow from below the wing to its upper surface. In this manner they allow flight at higher angles of attack and thus reduce the stall speed. 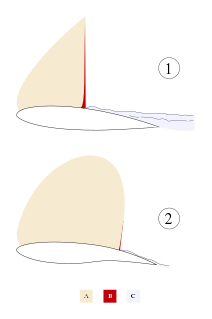 A supercritical airfoil is an airfoil designed primarily to delay the onset of wave drag in the transonic speed range.

In aeronautics and aeronautical engineering, camber is the asymmetry between the two acting surfaces of an airfoil, with the top surface of a wing commonly being more convex. An airfoil that is not cambered is called a symmetric airfoil. The benefits of cambering were discovered and first utilized by George Cayley in the early 19th century. 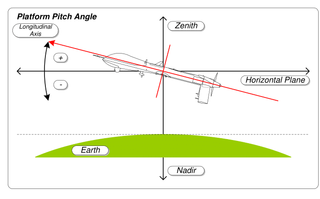 Coffin corner is the region of flight where a fast but subsonic fixed-wing aircraft's stall speed is near the critical Mach number, at a given gross weight and G-force loading. In this region of flight, it is very difficult to keep an airplane in stable flight. Because the stall speed is the minimum speed required to maintain level flight, any reduction in speed will cause the airplane to stall and lose altitude. Because the critical Mach number is the maximum speed at which air can travel over the wings without losing lift due to flow separation and shock waves, any increase in speed will cause the airplane to lose lift, or to pitch heavily nose-down, and lose altitude.

Slats are aerodynamic surfaces on the leading edge of the wings of fixed-wing aircraft which, when deployed, allow the wing to operate at a higher angle of attack. A higher coefficient of lift is produced as a result of angle of attack and speed, so by deploying slats an aircraft can fly at slower speeds, or take off and land in shorter distances. They are usually used while landing or performing maneuvers which take the aircraft close to a stall, but are usually retracted in normal flight to minimize drag. They decrease stall speed.