He was educated at Eton. [2] He served in the Queen's Own Dorset Yeomanry. [3]

He was a noted amateur golfer. [6]

Charles E. "Chick" Evans Jr. was an American amateur golfer of the 1910s and 1920s. Evans, who won the 1910 Western Open, became the first amateur to win both the U.S. Open and U.S. Amateur in one year, a feat he achieved in 1916. Evans won the U.S. Amateur again in 1920, and was runner-up three times. Selected to the Walker Cup team in 1922, 1924, and 1928, he competed in a record 50 consecutive U.S. Amateurs in his long career. Evans achieved all of this while carrying only seven hickory-shafted clubs.

John Ball Jr. was an English amateur golfer of the late 19th and early 20th century. 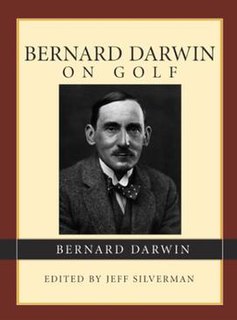 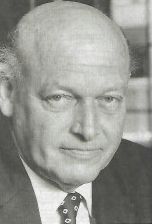 Charles Hambro, Baron Hambro was a British merchant banker and political fundraiser. He was the Chairman of Hambros Bank from 1972 until its merger with Société Générale in 1998. He was the senior honorary treasurer of the Conservative Party from 1993 to 1997.

The Hon. Michael Scott OBE was an English amateur golfer, most famous for being the oldest winner of The Amateur Championship. 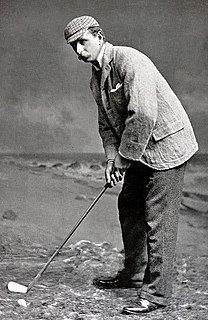 John Ernest Laidlay was a Scottish amateur golfer. He invented the most popular golf grip used today, although the grip is credited to Harry Vardon, who took it up after Laidlay.

Roger Henry Wethered was an English amateur golfer, and the brother of Joyce Wethered, one of the finest female golfers of the pre-war era.

Baron Carl Joachim Hambro was a Danish banker. He was the founder of Hambros Bank, one of the United Kingdom's largest investment banks.

Captain Ronald Olaf Hambro was a British merchant banker. He was chairman of Hambros Bank from 1932 to 1961. 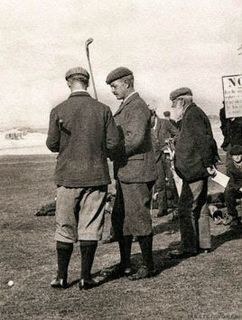 Edward Baird Hay Blackwell was a Scottish amateur golfer who played in the late 19th and early 20th century. He was a member of The Royal and Ancient Golf Club of St Andrews and finished in second place in the 1904 Amateur Championship contested at Royal St George's Golf Club in Sandwich, England. Although playing fine golf throughout, he eventually lost the final match to Walter Travis by the score of 4 and 3. He was known as a long hitter of the ball, often outdriving opponents by 50 yards or more. In 1898, Blackwell was described as probably the most consistently long driver the world had ever seen. As a result, his name became a household word among golfers. 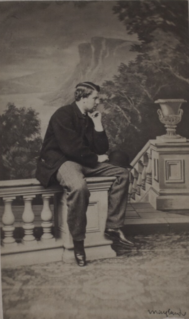 Sir Everard Alexander Hambro was a British banker and philanthropist. 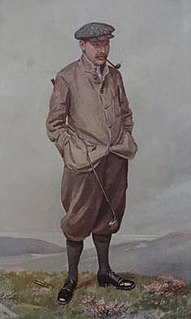 Robert Maxwell was a Scottish amateur golfer who played during the late 19th century and early 20th century. Maxwell had four top-10 finishes in The Open Championship. His best performance came in the 1902 Open Championship when he placed fourth. Maxwell won The Amateur Championship twice, in 1903 and 1909, both events having been played at Muirfield.

Sir Ernest William Elsmie Holderness, 2nd Baronet CBE was an English amateur golfer and one of the Holderness baronets. He won The Amateur Championship in 1922 and 1924 and the Golf Illustrated Gold Vase in 1925. He played in the Walker Cup in 1923, 1926, and 1930.

The England–Scotland Professional Match was an annual men's professional golf competition between teams representing England and Scotland. It was played from 1903 to the start of World War I and was then revived in 1932 and played until the start of World War II. The match was played on a single day, generally a few days before the Open Championship. Except on one occasion, there were 12 players in each team who played 12 singles matches and 6 foursomes. Scotland won the inaugural match in 1903 but didn't win another match, although three matches were tied. The event was organised by the PGA and only members of the PGA were eligible to play.

The England–Scotland Amateur Match was an annual men's amateur golf competition between teams representing England and Scotland. It was played from 1902 to 1931, although the match lapsed between 1913 and 1921. The match continued after 1931 but as part of the Men's Home Internationals in which Ireland and Wales also competed. Until 1931 it was played in connection with the Amateur Championship, on the Saturday either before or after the championship.