Ankara railway station (Turkish : Ankara Garı) is the main railway station in Ankara, Turkey, and is a major transportation hub within the city. The station is the eastern terminus of the Istanbul-Ankara railway corridor, as well as the easternmost station in Turkey with high-speed rail service. Ankara station is also a hub for YHT high-speed trains, with its own exclusive platforms and concourse. TCDD Taşımacılık also operates intercity train service to Kars, Tatvan and Kurtalan as well as Başkentray commuter rail service.

Located within the historic Ulus quarter, the station is a landmark of the city. In 2016, a new building was opened above the YHT platforms known as Ankara Tren Garı (ATG). The ATG building serves as a hub for high-speed rail with its own concourse containing information and tickets booths, waiting rooms and a VIP lounge, and is connected to the rest of the station via a skybridge.

The original builder, the Chemins de Fer Ottomans d'Anatolie (CFOA), was engaged in shipping war materials to the fronts in Palestine and Mesopotamia during World War I. Therefore, between 1914 and 1918 the Ankara station had no passenger service and very little freight service. The CFOA fell under British military control after the war, but the Turkish Nationalists captured Ankara and parts of the CFOA. During the Turkish Independence War, CFOA transported troops from Ankara, as the newly named capital of Turkey, to the front near Eskişehir. [1]

After the Turkish independence war ended, the passenger train services from Istanbul to Ankara resumed. The CFOA, now under Turkish control, finally opened the line to Kayseri and Ankara was no longer the terminus. CFOA was then acquired by the Turkish State Railways (TCDD) on June 1, 1927, and Ankara station was placed under TCDD control. [2] In 1927 the Anatolian Express was inaugurated as a premier overnight train from Istanbul to Ankara operated by the Compagnie Internationale des Wagons-Lits (CIWL). [3] The current Art deco building was built in 1937 by Turkish architect Şekip Akalın. As TCDD completed rail lines to other cities, new train services from Ankara such as the 9th of September Express (1939) to Izmir, the Eastern Express (1939) to Kars, and the Southern Express (1944) to Diyarbakır and Kurtalan made Ankara station one of the busiest stations in Turkey. In 1972, the station, along with the track between Sincan and Kayaş, were electrified with 25 kV AC catenary for the Ankara Suburban Railway. In 1993 the Istanbul-Ankara line was fully electrified. In the 1990s TCDD opened a steam museum next to the station. In 2009 a high-speed train service operated from Ankara to Eskişehir.

The 2015 Ankara bombings occurred on 10 October 2015 at 10:04 local time (EEST) in Ankara. Two bombs were detonated outside the entrance of the Ankara Central railway station, killing more than 105 and injuring more than 400 people. [4] [5] The attack is the deadliest of its kind in Turkey's modern history. [6]

The Turkish Chamber of Civil Engineers lists Ankara Central Station as one of the fifty civil engineering feats in Turkey, a list of remarkable engineering projects realized in the first 50 years of the chamber. [7]

Haydarpaşa station is a railway station in Istanbul. Until 2012 the station was a major intercity, regional and commuter rail hub as well as the busiest railway station in Turkey. Haydarpaşa, along with Sirkeci station, are Istanbul's two intercity and commuter railway terminals. From 19 June 2013 to 2018, all train service to the station was suspended due to the rehabilitation of the existing line for the new Marmaray commuter rail line. The station building still houses the headquarters for District 1 of the State Railways. 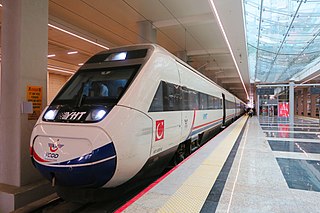 The Chemins de Fer Ottomans d'Anatolie, founded on 4 October 1888, was a railway company that operated in the Ottoman Empire. The company was headquartered in Istanbul. 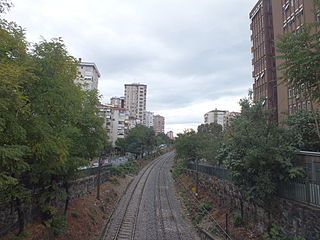 The Istanbul–Ankara railway is a 576.6 km (358.3 mi) long electrified railway in Turkey. The line connects Turkey's largest city, Istanbul, to the capital and second largest city, Ankara; making it one the busiest railways in the country in terms of passenger and freight rail traffic. The railway runs parallel to the Ankara-Istanbul high-speed railway and in several sections, the railway hosts YHT high-speed trains. 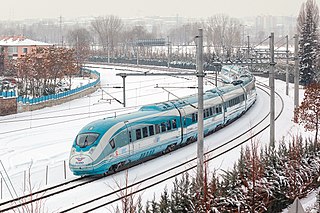 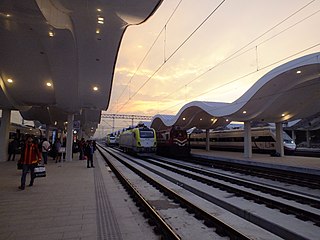 Eskişehir railway station is the main railway station in Eskişehir, Turkey. The station is part of a major railway facility, which is one of the largest in the country. Prior to the cancellation of all non-high-speed trains between Ankara and Istanbul, Eskişehir station was one of the busiest stations in Turkey. Eskişehir is served by high-speed trains on the Ankara–Istanbul line. Due to its geographical location, the city is an important railway junction, where two main lines meet. The largest railway factory in Turkey, owned by TÜLOMSAŞ, is located next to the station as well as serving as the headquarters for the company.

Polatlı railway station is a railway station in Polatlı. Polatlı is on the İstanbul-Ankara Main Line, with intercity rail services to many cities around Turkey. The station was built opened in 1892 by the Anatolian Railway.

Pendik station is the main railway station in Pendik, Istanbul. Located between Hatboyu and Abdülhalik Renda Avenues in southeastern Pendik. TCDD Taşımacılık operates YHT trains to Ankara and Konya, via Eskişehir, along with daily regional trains to Adapazarı. The station is 24.05 km (14.94 mi) away from Haydarpaşa station in central Istanbul. The metro line M10 is currently under construction to make the link with Sabiha Gökçen Airport, which is located about 9km in the North.

Polatlı HSR station, short for Polatlı High Speed Rail station is a railway station serving the Ankara–Istanbul high-speed railway just southeast of Polatlı. The station was opened on 16 February 2011, two years after the opening of the railway between Ankara and Eskişehir, and is the first railway station in Turkey to be dedicated to high-speed rail. Polatlı YHT is served by two tracks via side platforms with two express tracks in middle, as not all scheduled YHT trains stop at Polatlı. 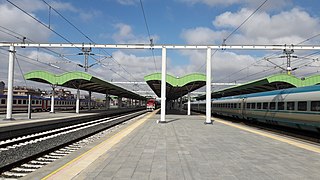 Bilecik HSR station, short for Bileck High Speed Rail station, is a railway station on the Ankara–Istanbul high-speed railway just east of Bilecik, Turkey. The station opened on 1 June 2015, almost a year after the opening of the Eskişehir-Istanbul portion of the high-speed railway, and is for the moment one of three railway station in Turkey dedicated to high-speed rail. Bilecik YHT has the same layout as the Polatlı YHT railway station; two tracks served by two side platforms and two passing tracks in the middle, as all scheduled YHT trains do not stop at Bilecik.

Ankara Tren Garı ("Ankara Train Station", alternatively known as Ankara YHT railway station and abbreviated as ATG, is a mixed-use commercial building in Ankara, Turkey. The building houses a shopping mall, a five-star hotel and commercial offices, as well as a concourse for YHT high-speed trains.

The Boğaziçi Express was a named passenger train operated between Istanbul and Ankara until 2012, when it was shortened between Arifiye and Ankara then later Arifiye to Eskişehir. The train was discontinued on 24 July 2014 and replaced by high-speed YHT trains.