Engelke moved to Cologne in 1971 with her German parents. Early on, she exhibited singing talent, and was discovered in 1978 by Georg Bossert at a performance of her school's choir.

From 1979 to 1986, she was the presenter of the daily children's television show broadcast from the Funkausstellung (a German radio exhibition, held every other year in Berlin), and the weekly children and youth's sports magazine show Pfiff. From 1978 to 1980, she hosted the show Moment mal (Wait a minute) on RTL. SWF3 first brought her on board in 1986 as an editor; later on, she was the presenter there until 1998. She has sung with Fred Kellner und die famosen Soul Sisters since 1989. Since 1993, she has been part of the SWF3-Comedy-Ensemble Gagtory.

From 1996 to 2000, she was part of Die Wochenshow on Sat.1, a rather famous comedy TV show in Germany at that time, alongside Bastian Pastewka, Ingolf Lück and Marco Rima.

In 2003, Anke Engelke and Olli Dittrich were awarded the Grimme-Preis for the improv show Blind Date 2 - Taxi nach Schweinau.

In December 2003, Engelke provided the voice of the fish Dory in the German dubbing of the computer-animated film Finding Nemo , which is voiced by Ellen DeGeneres in the English original. She also provided the voice of Jane Porter in the German dubbing of the Disney movie Tarzan , who is voiced by Minnie Driver in the original version.

Engelke can also be seen in the successful sketch comedy show Ladykracher on Sat.1. On May 17, 2004, when the very successful Die Harald Schmidt Show left Sat.1, Engelke took over its timeslot with Anke Late Night , which was cancelled due to low ratings a few months later on October 21, 2004.

In May 2011, she hosted the Eurovision Song Contest 2011 in Düsseldorf alongside Stefan Raab and Judith Rakers. [3]

The following year, Engelke served as the spokesperson for Germany at the Eurovision Song Contest 2012 held in Baku, Azerbaijan. Before presenting the votes, she also gave a live statement on the human-rights issues in the hosting country, saying: "Tonight nobody could vote for their own country. But it is good to be able to vote. And it is good to have a choice. Good luck on your journey, Azerbaijan. Europe is watching you." She was the only spokesperson to articulately address human rights during the event. She had also served as one of Germany's national juries for the contest during that year. [4] [5] [6]

In February 2013, her involvement with the Eurovision Song Contest continued as she hosted Unser Song für Malmö , the German national final.

Lys Assia was a Swiss singer who won the first Eurovision Song Contest in 1956. Assia was born in Rupperswil, Aargau, and began her stage career as a dancer, but changed to singing in 1940 after successfully standing in for a female singer.

Brainpool TV GmbH is a German television production company located in Cologne. It was a subsidiary of VIVA Medien AG between 2001 and 2006, until a management buyout in January 2007, now owned by Banijay Group. The film Stromberg – The Movie was crowdfunded with €1,000,000 in one week by 3,000 fans in December 2011.

The Eurovision Song Contest 2006 was the 51st edition of the annual Eurovision Song Contest. It took place in Athens, Greece, following Helena Paparizou's win at the 2005 contest in Kyiv, Ukraine with the song "My Number One". It was the first time Greece had hosted the contest - 32 years after the country made its debut. Organised by the European Broadcasting Union (EBU) and host broadcaster Hellenic Broadcasting Corporation (ERT), the contest was held at the Nikos Galis Olympic Indoor Hall, and consisted of a semi-final on 18 May, and the final on 20 May 2006. The two live shows were hosted by Maria Menounos and Sakis Rouvas.

The animated TV show The Simpsons is an American English language animated sitcom which has been broadcast in the United States since 1989 on FOX. In other countries, the TV show started broadcasting later than 1989 either in its original version or in a dubbed version.

The Eurovision Song Contest 2012 was the 57th edition of the annual Eurovision Song Contest. It took place in Baku, Azerbaijan, following Ell & Nikki's win at the 2011 contest in Düsseldorf, Germany with the song "Running Scared". It was the first time Azerbaijan had hosted the contest - only four years after the country made its debut. Organised by the European Broadcasting Union (EBU) and host broadcaster İctimai Television (İTV), the contest was held at the Baku Crystal Hall, and consisted of two semi-finals on 22 and 24 May, and the grand final on 26 May 2012. The three live shows were hosted by Leyla Aliyeva, Eldar Gasimov and Nargiz Birk-Petersen. It was the first Eurovision Song Contest held in a South Caucasus country.

Germany was represented by Ireen Sheer, with the song '"Feuer", at the 1978 Eurovision Song Contest, which took place on 22 April in Paris. "Feuer" was chosen as the German entry at the national final on 20 February, and was the second of Sheer's three Eurovision appearances; she had previously represented Luxembourg in 1974 and would later be a member of a six-piece ensemble in 1985, again on behalf of Luxembourg.

Germany was represented by Bianca Shomburg, with the song "Zeit", at the 1997 Eurovision Song Contest, which took place on 3 May in Dublin. "Zeit", composed by prolific Eurovision duo Ralph Siegel and Bernd Meinunger, was the winner of the German national final, held on 27 February.

France was represented by Christine Minier, with the song "Les mots d'amour n'ont pas de dimanche", at the 1987 Eurovision Song Contest, which took place on 9 May in Brussels. Broadcaster Antenne 2 chose the song via a broadcast national final, which would prove to be the last French national final until 1999. At the time of her victory Minier was not a professional singer, nor did she subsequently launch a professional career.

Germany hosted the Eurovision Song Contest 2011 in Düsseldorf and selected their song through a national final, organised by German broadcaster ARD in collaboration with Norddeutscher Rundfunk (NDR). In June 2010, ARD announced that Lena Meyer-Landrut would represent Germany at the contest again.

Aynishan Quliyeva is an Azerbaijani singer and the daughter of the famous Azeri singer Aybeniz Hasimova. In 2010, she made it to the Azerbaijani national final for the chance to represent Azerbaijan in the Eurovision Song Contest 2011 in Germany. In her semifinal she received 25,000 votes, about 10,000 more votes than any of the other winners of the semifinals. Quliyeva did not win but placed amongst the five final acts in the final. In 2015 she participated in The Voice of Turkey.

Rona Nishliu is a Kosovo-Albanian singer and songwriter. She came to international prominence after representing Albania in the Eurovision Song Contest 2012 in Baku, Azerbaijan, where she placed fifth and achieved the best placement for Albania to date.

Malta participated in the Eurovision Song Contest 2012 in Baku, Azerbaijan. The Maltese entry was selected through a national selection, organised by the Maltese broadcaster PBS. Kurt Calleja represented Malta with the song "This Is the Night", which qualified from the second semi-final and went on to place 21st in the final, scoring 41 points.

"Suus" is a song by Kosovo-Albanian singer and songwriter Rona Nishliu. It was released as part of a CD compilation on 4 May 2012 by Universal Music. The song was written by the singer herself and composed by Florent Boshnjaku. Musically, it is an Albanian-language folklore-inspired ballad, which lyrically addresses an emotional circumstance reflecting the moments that occurred in the past and the expectations of insecure tomorrows. 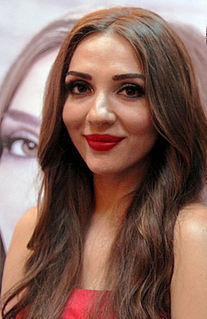 Sabina Babayeva is an Azerbaijani singer. She represented Azerbaijan in the grand final of the Eurovision Song Contest 2012, held in Baku, Azerbaijan on 26 May 2012, with the song "When the Music Dies", as the 13th act, and finished 4th overall.

Germany participated in the Eurovision Song Contest 2013 in Malmö, Sweden. The German entry was selected through the national final Unser Song für Malmö, which was organised by the public broadcasters NDR and ARD. Cascada represented Germany with the song "Glorious", which placed 21st and scored 18 points in the final.

Germany participated in the Eurovision Song Contest 2014 in Copenhagen, Denmark. The German entry was selected through the national final Unser Song für Dänemark, organised by the German broadcaster Norddeutscher Rundfunk (NDR). Elaiza represented Germany with the song "Is It Right". In the final, Germany placed 18th, scoring 39 points.

This is a list of German television related events from 1965.

This article is based on the corresponding article in the German Wikipedia (retrieved February 3, 2004).