Born in 1942, [1] Caselberg was the daughter of Edith Winifred Woollaston (née Alexander) and the painter Toss Woollaston. [2] She studied at the University of Auckland, spending a year living with Colin McCahon and his family during this time. [2] In 1960 she married poet John Caselberg, who—12 years older than her—was friends with both her father and McCahon. [2] [3]

Anna Caselberg worked in oils and watercolour, mostly painting landscapes, and her style is said to show the influences of Colin McCahon and her father. [4] SHe exhibitioed with The Group, in 1975. [5] Her work is held in public collections in New Zealand, including those of the Museum of New Zealand Te Papa Tongarewa, [6] Suter Art Gallery, [7] Hocken Collections, and the Dunedin Public Art Gallery. [1]

Caselberg died of cancer in late 2004, six months after her husband's death, also from cancer. [2] The Caselberg Trust, a charitable trust supporting artists, writers and composers by providing residencies at the Caselbergs' former house at Broad Bay on Otago Peninsula, is named in honour of John and Anna Caselberg. [8] 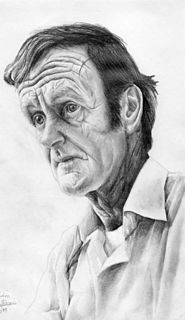 Colin John McCahon was a prominent New Zealand artist whose work over forty-five years consisted of various styles including landscape, figuration, abstraction and the overlay of painted text. Along with Toss Woollaston and Rita Angus, McCahon is credited with introducing modernism to New Zealand in the mid twentieth century. He is regarded as New Zealand's most important modern artist, particularly in his landscape work. 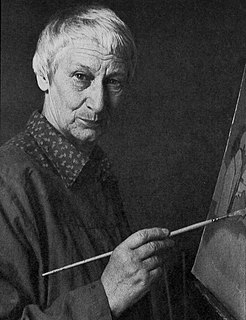 Rita Angus was a New Zealand painter. Along with Colin McCahon and Toss Woollaston, she is credited as one of the leading figures in twentieth century New Zealand art. She worked primarily in oil and water colour, and is well known for her portraits and landscapes.

Sir Mountford Tosswill "Toss" Woollaston was one of the most important New Zealand painters of the 20th century.

Helen Flora Victoria Scales (1887–1985) was a notable New Zealand artist. She was born in Lower Hutt, Wellington, New Zealand in 1887. 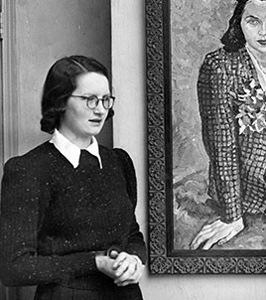 Doris More Lusk was a New Zealand artist and art teacher, potter, university lecturer. In 1990 she was posthumously awarded the Governor General Art Award in recognition of her artistic career and contributions. 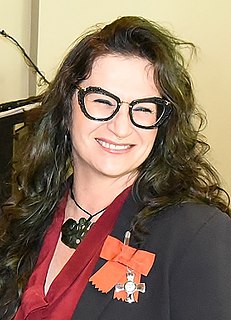 Helen Hitchings was a New Zealand art dealer, best known for the short-lived but influential eponymous dealer gallery she opened in Wellington in 1949.

Peter Joseph John McLeavey was a New Zealand art dealer and advocate based in Wellington.

Marilynn Lois Webb is a New Zealand artist. Her works are held in art collections in New Zealand, the United States, and Norway. Marilynn went on study leave between 1962-1963 and travelled to Spain, England and North Africa. Marilynn also ran teacher training courses in Suva, Fiji. This was where she worked on "intaglio hill from prints and early coastline images." Webb was later invited to exhibit in 2nd Graphic Triennale New Delhi, India; 7th International Exhibition of Graphic Art, Tokyo; Expo, Osaka, Japan. in 1970.

Ava Seymour is a New Zealand artist born in Palmerston North in 1967. She attended the Northern Melbourne Institute of TAFE in Prahran in 1988. Seymour was based in Berlin for two years, where she began producing her photocollages. She returned to New Zealand in 1994 and had her first exhibition in 1995. In 2001, Seymour was appointed a Frances Hodgkins Fellow. During this fellowship, she focused on Central Otago imagery. In 2009, Seymour received a McCahon House Artist residency, during which she developed work that was included in The Kauri Project: A Delicate Balance at Te Uru Contemporary Gallery, April 2015.

Anne McCahon was a New Zealand artist who emerged as part of a lively South Island art scene in the 1930s, often taking trips into the countryside on painting excursions with fellow artists Doris Lusk, Toss Woollaston and Edith Woollaston, and her eventual husband, Colin McCahon. Hamblett studied and first exhibited in Dunedin in the 1930s and 1940s. Her artistic output was circumscribed after she married fellow modernist artist Colin McCahon in 1942. Her work has rarely been exhibited since her early Dunedin painting days and her first solo show took place posthumously in 2016 at Te Uru Waitakere Contemporary Gallery.

Patricia France was a New Zealand abstract artist. She took up painting in her mid-fifties as part of counselling and art therapy at a private psychiatric hospital in Dunedin. Her works became in demand in all leading New Zealand private and public galleries. She was noted for her unique, unmistakable paintings, as well as her independent charm and quiet flair.