She reached the final of the 2013 European Indoor Championships, narrowly missing out on a medal and finishing in 4th place with a jump of 1.92 m. [3]

Her personal best jump is 1.96 metres, achieved on 9 August 2011 in Viljandi, Estonia (national record). [1] Her indoor best is 1.94, achieved on 2 February 2013 in Arnstadt, Germany (national record). [1] Her trainer for a long time was Martin Kutman, who in more than 60 years of training experience has trained a large number of good Estonian track and field athletes, mainly in sprinting and jumping events (high jump, triple jump, pole vault), many of whom have represented the Estonian and former USSR national team in international competitions. Kutman died on May 29, 2012. 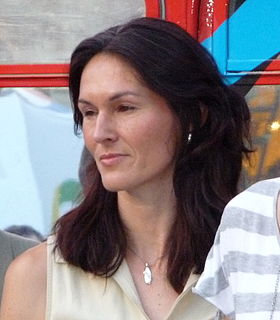 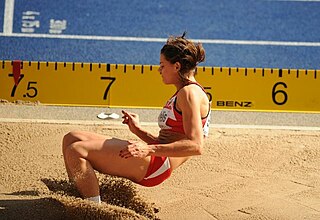 Deborah Jane Marti is a former high jumper from England, who was born in Switzerland. She represented Great Britain at the Olympic Games in Barcelona 1992 and Atlanta 1996, finishing ninth in the 1992 final. She set her outdoor personal best of 1.94 metres, on 9 June 1996 at a meet in Tallinn. On 23 February 1997 in Birmingham, she cleared 1.95 metres to set a British indoor record, which stood for 17 years (1997–2014). She also won bronze medals at the 1983 European Junior Championships and the 1994 Commonwealth Games.

Alessia Trost is an Italian female high jumper who won the 2009 World Youth Championship in Athletics in Brixen. She was the bronze medallist at the 2018 IAAF World Indoor Championships. 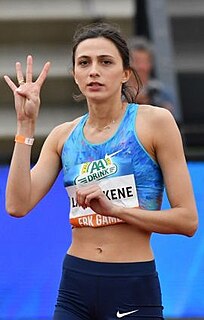 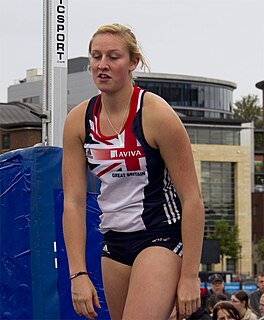 Emma Maud Nuttall is a British track and field athlete who specialises in the high jump. She represented Scotland at the 2014 Commonwealth Games and won the British title in 2013. She held the Scottish Indoor record with a clearance of 1.88 metres in 2014 which was only beaten in 2018 (1.90)

Lea Haggett-Goodman was an English high jumper. She represented Great Britain at the 1996 Olympic Games in Atlanta and won a bronze medal at the 1990 World Junior Championships in Plovdiv. She held the UK junior record for 23 years, from 1991 to 2014.