Following her marriage, she took her husband's surname and moved to Estonia. She works as a coach in Tallinn.

Anna Kondrashova was born in Moscow, then part of the Russian SFSR in the Soviet Union. She is married to Allar Levandi, an Estonian Olympic Nordic combined skier. They live in Tallinn.

In 2011, Levandi participated as a celebrity contestant on the fifth season of Tantsud tähtedega , an Estonian version of Dancing with the Stars . Her professional dancing partner was Mairold Millert. 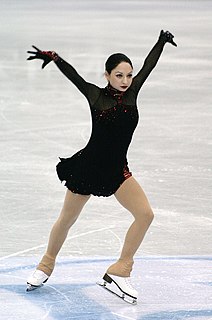 Elene Gedevanishvili is a Georgian figure skater. She is a two-time European bronze medalist. In winning the medal in 2010, Gedevanishvili became the first skater from Georgia to medal at an ISU Championships. She has competed at three Winter Olympics: Turin 2006, Vancouver 2010 and Sochi 2014.

Allar Levandi is an Estonian nordic combined skier who competed during the late 1980s and early 1990s under two different nations in three straight Winter Olympic Games. He trained at Dynamo in Tallinn when Estonia was under Soviet rule in the late 1980s.

Alisa Drei is a Finnish former competitive figure skater. She finished in the top ten at seven European Championships.

Alisa Agafonova is a former competitive ice dancer. She is best known for her partnership with Alper Uçar. Representing Turkey, they competed at two Winter Olympics and won eight international medals, including silver at the 2011 Winter Universiade and three medals on the ISU Challenger Series. They skated in the final segment at six European Championships and four World Championships.

Ilja Glebov is an Estonian former competitive pair skater. With former partner Maria Sergejeva, he is the 2007–09 Estonian national champion and competed at the 2010 Winter Olympics in Vancouver. After they parted ways at the end of the 2009–10 season, he considered partnering with another skater but had army service. He is the elder brother of Estonian figure skater Jelena Glebova. 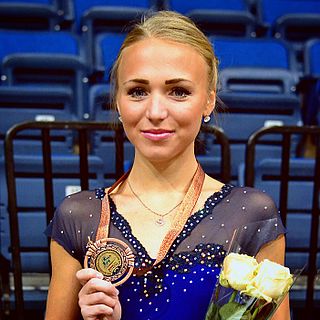 Johanna Allik is an Estonian figure skater. As a single skater, she has won two senior international medals and is a two-time Estonian national silver medalist. She switched to ice dance in 2011 and won the 2012 Estonian junior title with partner Paul Bellantuono. After a two-season hiatus from competitive skating from 2013-2015, she returned to singles skating for the 2015–16 figure skating season.

Olga Algertovna Volozhinskaya is a former ice dancer who competed for the Soviet Union. With Alexander Svinin, she is the 1983 European silver medalist, 1985 Skate Canada International champion, and competed at the 1984 Winter Olympics in Sarajevo.

Svetlana Lvovna Alekseeva is a Russian former ice dancer and currently a coach.

Oksana Romanenkova, née Hutornaja, is an Estonian figure skating coach and former competitor. She is a five-time Estonian national champion in ladies' singles. She gave birth to her son, Viktor Romanenkov, on 29 September 1993 in Tallinn.

Helery Hälvin is an Estonian competitive figure skater. She is a three-time Estonian national champion and has qualified to the free skate at two ISU Championships – 2016 Europeans in Bratislava, Slovakia, and 2017 Europeans in Ostrava, Czech Republic.

Daniel Albert Naurits is an Estonian figure skater. He is the 2017 Nordic bronze medalist and a two-time Estonian national champion. He has competed in the final segment at three ISU Championships.

The 2017 CS Tallinn Trophy was a senior international figure skating competition, held in November 2017 at the Tondiraba Ice Hall in Tallinn, Estonia. Its senior categories were part of the 2017–18 ISU Challenger Series. Medals were awarded in the disciplines of men's singles, ladies' singles, pair skating, and ice dancing.