By the time she was in her early twenties, Hébert's work had been published in a number of periodicals. [3] Her first collection of poems, Les Songes en Équilibre, was published in 1942. In it she writes of herself as existing in solitude in a "dreamlike torpor". [4] It received positive reviews and won her the Prix David.

Saddened by the 1943 death of her thirty-one-year-old cousin, Hector de Saint-Denys Garneau, and by the death of her only sister Marie in 1952, Hébert's poetry became filled with images of death and drowning." [5] No Quebec publisher would publish her 1945 collection of stories, Le Torrent. It was finally published in 1950 at the expense of Roger Lemelin. [3] The provocative tales were considered shocking at the time, but later grew in popularity. [4]

Again, she could not find a publisher for her second book of anguish-filled poetry, Le Tombeau des rois (The Tomb of Kings), and had to publish it at her own expense in 1953. [3] In 1954 Hébert used a grant from the Royal Society of Canada to move to Paris, thinking that the city would be more receptive to her writing. [3]

Les Chambres de bois (1958), her first novel, was a passionate story which depicted violence and brutality through evocative imagery. [4] Hébert was one of the first Québécois writers to experiment in her work with the expression of alienation and rebellion, rather than realistic narration and discussion." [5]

Hébert returned to Canada in the 1990s. Her last novel Un Habit de lumière was published in 1998.

Hébert was elected a Fellow of the Royal Society of Canada in 1960. [4]

Hébert won France's Prix de librairies for her 1970 novel Kamouraska and its Prix Fémina for her 1982 novel Les fous de Bassan. Both books have also been made into movies, Kamouraska in 1973 directed by Claude Jutra, and Les fous de Bassan in 1986 by Yves Simoneau. [4] Kamouraska also won the Grand Prix of the Académie royale de la langue françaises de Belgique. [5]

Hébert's work has been translated into at least seven languages, including English, German, Italian, Japanese, and Spanish. The First Garden, the English translation of Le premier jardin, won the Félix Antoine-Savard Prize for Translation in 1991, [8]

L'école Anne-Hébert, opened in Vancouver in 1983, is an elementary school that offers instruction from kindergarten through grade 6 in French only. [9]

On September 8, 2003, to commemorate the 50th anniversary of the National Library of Canada, Canada Post released a special commemorative series, "The Writers of Canada", with a design by Katalina Kovats, featuring two English-Canadian and two French-Canadian stamps. Three million stamps were issued. The two French-Canadian authors used were Hébert and her cousin, Hector de Saint-Denys Garneau. [11]

The 2001 Governor General's Awards for Literary Merit were presented by Adrienne Clarkson, Governor General of Canada, at a ceremony at Rideau Hall on November 14. Each winner received a cheque for $15,000.

Jacques Poulin is a Canadian novelist with a quiet and intimate style of writing. Poulin studied psychology and arts at the Université Laval in Quebec City; he started his career as commercial translator and later became a college guidance counselor. Only after the success of his second novel, Jimmy (1969), was he able to devote himself completely to his writing. Poulin has written fourteen novels, many of which have been translated into English by Sheila Fischman, and published by Cormorant Books.

Sheila Leah Fischman, is a Canadian translator who specializes in the translation of works of contemporary Quebec literature.

Gaétan Soucy was a Canadian novelist and professor.

Naïm Kattan, is a Canadian novelist, essayist and critic of Iraqi Jewish origin. He is the author of more than 30 books, translated into several languages.

Pan Bouyoucas is a Greek-Canadian author, playwright and translator.

Madeleine Ouellette-Michalska is a Canadian writer from Quebec.

Paul Hébert, OC, CQ was a French Canadian television and stage actor and director, and the founder of six theatres in Quebec. He is best known for his role as Siméon Desrosiers in Le Temps d’une paix, a Canadian soap opera. 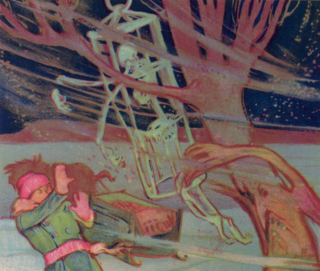 Marie-Josephte Corriveau, better known as "la Corriveau", is a well-known figure in Québécois folklore. She lived in New France, and was sentenced to death by a British court martial for the murder of her second husband, was hanged for it and her body hanged in chains. Her story has become a legend in Quebec, and she is the subject of many books and plays.

In the Shadow of the Wind is a Canadian drama film, directed by Yves Simoneau and released in 1986. It was entered into the 37th Berlin International Film Festival.

Christiane Frenette is a Quebec educator and writer.

The Prix France-Québec is a Canadian literary award, presented to a Canadian French language writer who has published work in either Canada or France.

André Brochu (born 3 March 1942 in Saint-Eustache, Quebec) is a poet, essayist and professor of Quebecois literature.

Pierre Birnbaum is a French historian and sociologist.

Marie-Danielle Croteau is a Canadian writer of youth literature living in Quebec and Central America.