Last updated March 22, 2021
American atheist and campaigner for abortion rights
This article is about the founder of the Freedom From Religion Foundation. For her daughter, see Annie Laurie Gaylor.

Anne Nicol Gaylor (November 25, 1926 – June 14, 2015) was an American atheist and reproductive rights advocate. She co-founded the Freedom from Religion Foundation and an abortion fund for Wisconsin women. She wrote the book Abortion Is a Blessing and edited The World Famous Atheist Cookbook. In 1985 Gaylor received the Humanist Heroine Award from the American Humanist Association, and in 2007 she was given the Tiller Award by NARAL Pro-Choice America.

Anne Nicol was born to Jason Theodore and Lucy Edna (née Sowle) Nicol on November 25, 1926, in Tomah, Wisconsin. [1] [2] Her mother died when Anne was two years old. Anne Nicol graduated from high school at age 16 and earned an English degree from the University of Wisconsin–Madison in May, 1949. She married Paul Joseph Gaylor the same year, [1] and they had four children: Andy, Annie Laurie, Ian, and Jamie. [2] [3]

Gaylor started the first private employment agency in Madison, Wisconsin, which she sold in 1966. She then became editor of the Middleton Times-Tribune. [3]

In 1967, while editor of the Times-Tribune, Gaylor wrote an editorial calling for legalized abortion in Wisconsin. She later joined the Association for the Study of Abortion, the Wisconsin Committee to Legalize Abortion, and Zero Population Growth. In 1970 first-trimester abortions were legalized in Wisconsin, and she began the Zero Population Growth Referral Service to refer women to abortion providers. However, there were still few doctors who provided abortions in the state, so Gaylor often referred women to Mexico and New York. [4] [5] She also served on the Board of Directors of NARAL, now known as NARAL Pro-Choice America. [2]

Gaylor, along with University of Wisconsin chemistry professor Robert West, founded the Women's Medical Fund to expand the services provided by the ZPG Referral Service. [1] The organization was incorporated as a nonprofit in 1976. It provides small grants (on average about $200) to women who are unable to pay the full costs of their abortions.

Funding comes from individual donors and foundation grants. In the past the Fund advertised its services, but now referrals come directly from abortion clinics. The organization is run entirely by volunteers, with no paid staff, and Gaylor answers many of the referral calls herself. It has paid out nearly $3,000,000 to abortion providers on behalf of patients. [4] In 2009 the organization paid out $162,202 to its clients, and Gaylor took about 800 phone calls. [6] By 2010, Gaylor had written checks to help pay for 18,986 abortions. [6]

Gaylor wrote Abortion Is a Blessing in 1975. The book argues for liberalization of abortion laws and details her experiences advocating for reproductive rights. It is currently out of print, but the full text is available online. [7]

While working on abortion rights issues, Gaylor felt the need to address what she saw as the root cause of women's oppression: religion. She felt that the existing women's rights organizations were not confronting this issue, so she founded the Freedom From Religion Foundation (FFRF) in 1976, along with her daughter Annie Laurie and John Sontarck. [1] She served as the president and executive director until her retirement in 2005. The group is currently headed by her daughter and son-in-law, Dan Barker. She worked as a consultant for the FFRF and held the position of president emerita. While she was president the group grew from three to over 19,000 members in all 50 U.S. states and Canada. [3]

FFRF is a nonprofit organization that promotes the separation of church and state and educates the public on matters relating to atheism, agnosticism, and nontheism. Under her leadership, the foundation was involved in several high-profile legal cases, including one that ended the teaching of Christian doctrine in a Tennessee public school [8] and another that overturned a law that made Good Friday a state holiday in Wisconsin. [9]

Gaylor produced the first atheist commercials that ever aired on television, on Madison's Channel 3. She also appeared on television and radio programs such as Crossfire, Larry King's radio show, and Oprah Winfrey's A.M. Chicago as a spokesperson for FFRF. [2] In 1999, the FFRF published The World Famous Atheist Cookbook, edited by Gaylor. [10]

She died in a hospice after she was hospitalized and later had a fall. [12] [13]

The American Humanist Association (AHA) is a non-profit organization in the United States that advances secular humanism, a philosophy of life that, without theism or other supernatural beliefs, affirms the ability and responsibility of human beings to lead personal lives of ethical fulfillment that aspire to the greater good of humanity.

The Freedom From Religion Foundation (FFRF) is an American non-profit organization, which advocates for atheists, agnostics, and non-theists. Formed in 1976, FFRF promotes the separation of church and state, and challenges the legitimacy of many federal and state programs that are faith-based. It supports groups such as nonreligious students and clergy who want to leave their faith.

Katha Pollitt is an American poet, essayist and critic. She is the author of four essay collections and two books of poetry. Her writing focuses on political and social issues from a left-leaning perspective, including abortion, racism, welfare reform, feminism, and poverty.

NARAL Pro-Choice America, commonly known as simply NARAL, is a non-profit 501(c)(4) organization in the United States that engages in lobbying, political action, and advocacy efforts to oppose restrictions on abortion and expand access to abortion and birth control and support paid parental leave and protection against pregnancy discrimination.

Bill Baird is a reproductive rights pioneer, called by some media the "father" of the birth control and abortion-rights movement. He was jailed eight times in five states in the 1960s for lecturing on abortion and birth control. Baird is believed to be the first and only non-lawyer in American history with three Supreme Court victories. 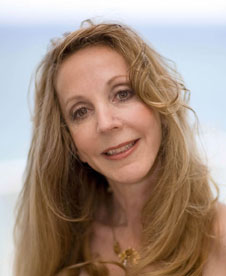 Rebecca Newberger Goldstein is an American philosopher, novelist, and public intellectual. She has written ten books, both fiction and non-fiction. She holds a Ph.D. in philosophy of science from Princeton University, and is sometimes grouped with novelists such as Richard Powers and Alan Lightman, who create fiction that is knowledgeable of, and sympathetic toward, science.

Ruth Hurmence Green gained notability within the atheist community with the publication of her book The Born Again Skeptic's Guide to the Bible in 1979. This book has since been the best selling publication from the Freedom From Religion Foundation. She was also the author of many other essays which were published posthumously in The Book of Ruth in 1982. 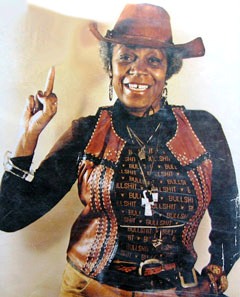 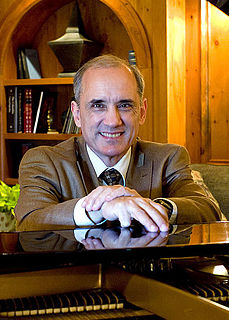 Daniel Edwin Barker is an American atheist activist and musician who served as an evangelical Christian preacher and composer for 19 years but left Christianity in 1984. He and his wife Annie Laurie Gaylor are the current co-presidents of the Freedom From Religion Foundation. He has written numerous articles for Freethought Today, an American freethought newspaper. He is the author of several books including Losing Faith in Faith: From Preacher to Atheist.

Annie Laurie Gaylor is an American atheist, secular and women's rights activist and a co-founder of – and, with her husband Dan Barker, a current co-president of – the Freedom From Religion Foundation. She was also the editor of the organization's newspaper, Freethought Today until 2015. Gaylor is the author of several books, including Woe to the Women: The Bible Tells Me So, Betrayal of Trust: Clergy Abuse of Children and, as editor, Women Without Superstition: No Gods – No Masters.

Atheist feminism is a branch of feminism that also advocates atheism. Atheist feminists hold that religion is a prominent source of female oppression and inequality, believing that the majority of the religions are sexist and oppressive towards women. 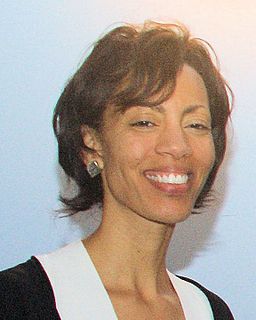 Sikivu Hutchinson is an American feminist, atheist, author/novelist and playwright. She is the author of Humanists in the Hood: Unapologetically Black, Feminist, and Heretical (2020), White Nights, Black Paradise (2015), Godless Americana: Race and Religious Rebels (2013), Moral Combat: Black Atheists, Gender Politics, and the Values Wars (2011), and Imagining Transit: Race, Gender, and Transportation Politics in Los Angeles (2003). Moral Combat is the first book on atheism to be published by an African-American woman. In 2013 she was named Secular Woman of the year and was awarded Foundation Beyond Belief's 2015 Humanist Innovator award, and the Secular Student Alliance's 2016 Backbone award. 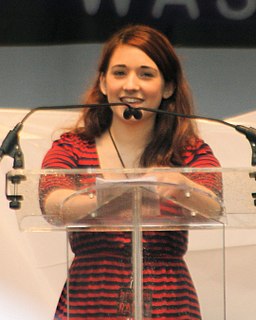 Jessica Ahlquist is an activist and public speaker who filed a lawsuit in 2012 against Cranston High School West, where she was a student, to remove a religious prayer from its auditorium. The suit, Ahlquist v. Cranston, was filed with the assistance of the American Civil Liberties Union, and was ultimately decided in Ahlquist's favor. During the lawsuit, Ahlquist received hate mail and was verbally attacked by her peers, media outlets, and online. She received death threats, and required police escorts to and from classes. On the day following the ruling, Rhode Island State Representative Peter G. Palumbo spoke on a local radio show and referred to Ahlquist as "an evil little thing".

The secular movement refers to a social and political trend in the United States, beginning in the early years of the 20th century, with the founding of the American Association for the Advancement of Atheism in 1925 and the American Humanist Association in 1941, in which atheists, agnostics, secular humanists, freethinkers, and other nonreligious and nontheistic Americans have grown in both numbers and visibility. There has been a sharp increase in the number of Americans who identify as religiously unaffiliated, from under 10 percent in the 1990s to 20 percent in 2013. The trend is especially pronounced among young people, with about one in three Americans younger than 30 identifying as religiously unaffiliated, a figure that has nearly tripled since the 1990s.

Mandisa Lateefah Thomas is the founder and president of Black Nonbelievers Inc. She has spoken at secular conferences and events, and has promoted the group's agenda in media outlets.

Gaylor may refer to:

Robyn Ellen Blumner is a journalist, civil rights expert and the current president and chief executive officer (CEO) of the secular educational organization Center for Inquiry (CFI) and executive director of the Richard Dawkins Foundation for Reason and Science. She holds a J.D. degree and worked for several years as director of local affiliates of the American Civil Liberties Union advocating for civil liberties and civil rights before becoming a newspaper columnist and editorial writer in Florida.