Anne of Denmark, Electress of Saxony

For the Queen Consort of James VI and I, king of Scotland, England and Ireland, see Anne of Denmark

Anne of Denmark (Danish and German: Anna; Haderslev, 22 November 1532 - Dresden, 1 October 1585) was a Danish princess from the House of Oldenburg. Through her marriage with Augustus of Saxony she became Electress of Saxony. She was renowned for her knowledge of plants and her skill in the preparation of herbal remedies, and contributed to the development of farming and horticulture in Saxony. She was a major influence in the introduction of orthodox Lutheranism and played a role in the decision to persecute Calvinists.

Anna of Denmark was a daughter of king Christian III of Denmark and Norway and his wife Dorothea of Saxe-Lauenburg. [1] Her mother taught her the basic principles of gathering medicinal plants and preparing herbal remedies. After the introduction of Protestantism in Denmark in 1537, she was raised as a strict orthodox Lutheran. [2]

In March 1548 she became betrothed to Augustus of Saxony, the younger brother and possible heir of Elector Maurice of Saxony. This marriage supported the Danish ambition to have closer ties to Germany. The Elector on his part wanted to achieve better relations with the Lutheran factions. The wedding took place in Torgau in October 1548. It was the first major festivity in the reign of Elector Maurice and the first opportunity for the Albertinian line of the House of Wettin to present themselves as Electors of Saxony, a title they had obtained in 1547. [2]

Marriage and role as electress

Anna and Augustus initially lived in Weißenfels. When Augustus became Elector in 1553 following the death of his brother Maurice, they lived mainly in Dresden. They had fifteen children, four of whom reached adulthood. [1] Their marriage was considered to be harmonious.

Anna of Denmark was a great writer of letters and kept a good archive of her correspondence. Her letters provide detailed insight into her daily life and her involvement in the political and religious affairs of her time. In Saxony, and throughout Europe, she was considered to be a person of considerable influence. [2] She was a very active advocate of Lutheranism and played a role in the suppression of crypto-Calvinism in Saxony between 1574 and 1577. It is unclear to what extent she was involved in the harsh persecution of Calvinists which included torture and long periodes of incarceration. [3] She had good relations with other royal and princely houses and was frequently asked to act as an intermediary, in conflicts as well as in marriage negotiations. [2]

During her lifetime, Anna of Denmark was known for her skill in managing gardens and farmland. In 1578, her husband entrusted her with the management of all his estates. She contributed to the development of agriculture in Saxony by introducing new crops and new species of livestock, and promoted the introduction of horticulture as practiced in the Low Countries and Denmark. This had a positive effect on the economy of Saxony, which became one of the most prosperous parts of Germany. She was an acknowledged expert in herbal lore and personally prepared herbal remedies; she is now considered to have been the first female pharmacist in Germany. [3] In castle Annaburg, which was named after her, she had her own large laboratory and library. [2]

Anna of Denmark died on October 1, 1585 after a long period of ill health. She remains one the best known Electresses of Saxony, partly because of biographies written about her in the 19th century which emphasise her traditional role as 'mother of the nation.' [3]

John Casimir, Count Palatine of Simmern was a German prince and a younger son of Frederick III, Elector Palatine. A firm Calvinist, he was a leader of mercenary troops in the religious wars of the time, including the Dutch Revolt. From 1583–1592 he acted as regent for his nephew, Elector Palatine Frederick IV.

Anna Maria of Mecklenburg-Schwerin was a German noblewoman, a member of the House of Mecklenburg and by marriage Duchess of Saxe-Weissenfels.

Christian I of Saxony was Elector of Saxony from 1586 to 1591. He belonged to the Albertine line of the House of Wettin. 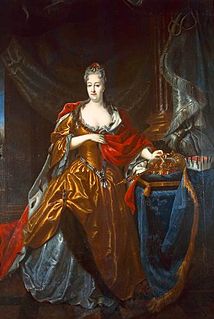 Christiane Eberhardine of Brandenburg-Bayreuth was Electress of Saxony from 1694 to 1727 and titular Queen of the Polish–Lithuanian Commonwealth from 1697 to 1727 by marriage to Augustus II the Strong. Not once throughout the whole of her thirty-year queenship did she set foot in Poland, instead living in Saxony in self-imposed exile. Born a German margravine, she was called Sachsens Betsäule, "Saxony's pillar of prayer", by her Protestant subjects for her refusal to convert to Catholicism and her loyalty to the Protestant faith. Despite the allegiance of Christiane Eberhardine and her mother-in-law, Anna Sophie of Denmark, to Lutheranism, her husband and son, later Augustus III, both became Catholics, ensuring Catholic succession in the Albertine lands after a century-and-a-half.

Princess Anna Sophie of Denmark was the eldest daughter of King Frederick III of Denmark and Sophie Amalie of Brunswick-Lüneburg, and Electress of Saxony from 1680 to 1691 as the wife of John George III. 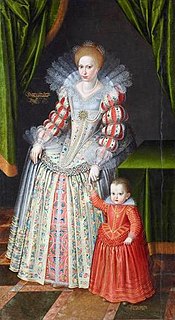 Magdalene Sibylle of Prussia was an Electress of Saxony as the spouse of John George I, Elector of Saxony.

Sophie of Brandenburg was Electress of Saxony by marriage to Christian I, Elector of Saxony. She was regent from 1591 to 1601 during the minority of their son Christian II.

Catherine of Mecklenburg, Duchess of Saxony, was the daughter of the Duke Magnus II of Mecklenburg and Sophie of Pomerania-Stettin. She married on 6 July 1512 in Freiberg Duke Henry the Pious of Saxony. The couple had six children:

Sidonie of Saxony was a princess of the House of Wettin and by marriage Duchess of Brunswick-Lüneburg and Princess of Calenberg-Göttingen.

Dorothea of Saxony was a Saxon princess from the House of Wettin and by marriage Duchess of Brunswick-Wolfenbüttel.

Paul Luther was a German physician, medical chemist, and alchemist. He was the third son of the German Protestant Reformer Martin Luther and was successively physician to John Frederick II, Duke of Saxony; Joachim II Hector, Elector of Brandenburg; Augustus, Elector of Saxony and his successor Christian I, Elector of Saxony. He taught alchemy to Anne of Denmark.

Elisabeth of Saxony was a Saxon princess from the House of Wettin by birth and by marriage Countess Palatine of Simmern.

Anna of Saxony, was a German noblewoman member of the House of Wettin and by marriage Duchess of Saxe-Coburg-Eisenach.