Van Vleuten has won both of women's cycling Grand Tours – winning the Giro d'Italia Donne three times in 2018, 2019 and 2022, and winning the Tour de France Femmes in 2022. She became the first woman to complete a Giro – Tour double in the same year.

In winning the UCI Women's Road World Cup in 2011, and the UCI Women's World Tour in 2018 and 2021, Van Vleuten won multiple stage races and one day events. She has won cycling monuments including Liège–Bastogne–Liège Femmes, Strade Bianche Donne and Tour of Flanders for Women on multiple occasions. She has been awarded Dutch women's cyclist of the year three times. Van Vleuten will retire at the end of the 2023 season.

As a child, Annemiek played football, gymnastics and horse riding – and rode her bike to school. Van Vleuten studied animal sciences and specialised in zoonoses and epidemiology at the University of Wageningen, [5] graduating with a master's degree in epidemiology in 2007. In 2005, she was advised by her doctor to take up cycling following a knee injury playing football. [6] [7]

In 2012, Van Vleuten represented the Netherlands in the Women's road race at the 2012 Summer Olympics, along with Ellen van Dijk, Marianne Vos and Loes Gunnewijk. The race was won by Vos. [10] She also won the Dutch National Road Race Championships. [11] After a less than successful 2013, [12] she won the Dutch National Time Trial Championship for the first time in 2014. [13] In 2015 she joined the Bigla Pro Cycling Team. [14] She took part in the 2015 European Games for the Netherlands, in cycling, more specifically, the women's time trial; Van Vleuten won a bronze medal. [14]

In 2016, Van Vleuten joined the Orica-AIS team. On 7 August 2016, while leading the road race at the 2016 Olympic Games, Van Vleuten crashed head first on the steep descent from Vista Chinesa after missing her braking point before a sharp bend, 12 km (7.5 mi) before the finish. [15] [16] The crash knocked her unconscious, and she was hospitalised with three lumbar spinal fractures and a severe concussion. [17] Despite her injuries, Van Vleuten was riding a bicycle within ten days of her accident [18] and made a winning return to competition one month later, taking the overall victory and two stage wins at the 2016 Belgium Tour. [19] She also won her second Dutch National Time Trial Championship. [20] [7]

2018 was Van Vleuten's most successful year of her career – she won the 2018 Giro Rosa (winning 3 stages), she defended her world title in the time trial at the 2018 UCI Road World Championships in Innsbruck, Austria, and she won the UCI Women's World Tour after multiple victories at events such as La Course and Holland Ladies Tour. [22] She ended the 2018 season with a total of 13 victories. [7]

In 2019, Van Vleuten defended the Giro Rosa, winning by over 3 minutes and taking all major classifications (general, points and mountain). [7] [23] At the 2019 UCI Road World Championships in Harrogate, she won the road race after riding solo for 100 kilometres (62 miles) of the 149-kilometre (93-mile) race, holding back the chasing groups. [24] She also won the Dutch national time trial championship for the fourth time. [25] Despite winning the Giro and major races such as Liège–Bastogne–Liège Femmes and Strade Bianche Donne, Van Vleuten finished second in the 2019 UCI Women's World Tour standings behind fellow Dutch rider Marianne Vos.

In the disrupted 2020 season, she won the European Road Championships, as well as Strade Bianche Donne for the second time. [26] For the 2021 season, Van Vleuten jointed the Movistar Team. She started her season by winning Tour of Flanders for Women, 10 years after her first victory. [27]

In July 2021, she was one of four Dutch cyclists competing in the 137-kilometre (85-mile) women's Olympic road race in Tokyo, where she won the silver medal in the race, crossing the finish line 75 seconds behind Austria's Anna Kiesenhofer. [28] [29] With around 60 kilometres (37 miles) left in the race, Van Vleuten crashed, but rejoined the race. [29] Her attack with 2.1 kilometres (1.3 miles) to go secured her second place. [29] When Van Vleuten finished the race, she celebrated thinking she had won, as she was unaware of Kiesenhofer being in front of her. [30] [31] Three days later, she became Olympic champion by winning the gold medal in the time trial. [32]

She won the UCI Women's World Tour for the second time, following victories at Challenge by La Vuelta and Ladies Tour of Norway. [27] In October 2021 at the end of the season, she crashed in the first ever Paris–Roubaix Femmes, breaking her pubis bone in two places. [33] In December 2021, Van Vleuten was named Dutch cyclist of the year (Keetie van Oosten-Hage Trophy  [ nl ]) for a third time, winning the award in 2017, 2019 and 2021. [34] [35]

In 2022, Van Vleuten started her season by winning two classics – Omloop Het Nieuwsblad, and Liège–Bastogne–Liège Femmes for the second time. [36] In June 2022, Van Vleuten signed a one-year contract extension with the Movistar Team, with the intention to retire from cycling at the end of the 2023 season. [37] She won her third Giro d'Italia Donne the following month, winning two stages and the points classification. [38] [39]

Later the same month, she was named as one of the pre-race favourites for the first edition of the Tour de France Femmes. [40] During the Tour she suffered from stomach issues early in the race, which cost her over a minute in the standings and put her near the bottom of the top 10 in the overall standings. [41] On stage 7 she blew the race apart with a solo attack for the stage win, which also put her in the yellow jersey as overall race leader by over 3 minutes ahead of Demi Vollering. [42] The next day she sealed the Tour victory, defeating Vollering on the final climb and claiming her second stage win of the race. Vollering was the only rider to keep her within five minutes and only five other riders were able to keep her within 10 minutes. [43] She became the first woman to complete a Giro – Tour double in the same year. [36]

Outside of cycling, Van Vleuten lives a low-key life, enjoying scuba diving, watching football, and playing the Settlers of Catan board game with friends. [5] [7]

The Giro d'Italia Femminile is an annual elite women's road bicycle racing stage race. It was rebranded from 2013-2020 as the Giro Rosa, having been branded the Giro Donne until 2012 and again in 2021. 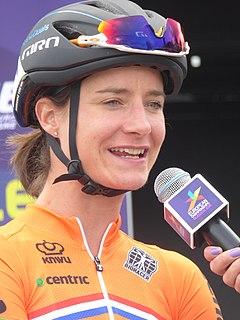 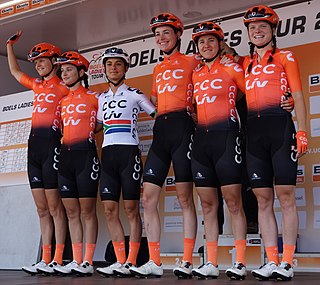 Liv Racing–Xstra is a women's professional cycling team, based in the Netherlands. The title sponsor is Liv, a sub-brand of Taiwanese bicycle manufacturer Giant Bicycles. The team's directeur sportif is Eric van den Boom. Riders for Liv Racing compete in the UCI Women's World Tour and other Elite Women's Cycling events throughout the world. 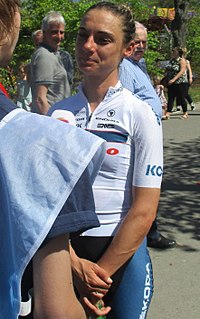 Team BikeExchange–Jayco is a women's professional cycling team based in Australia which competes in the UCI Women's World Tour and other elite women's events throughout the world. 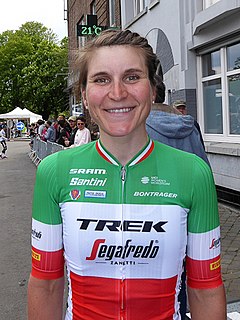 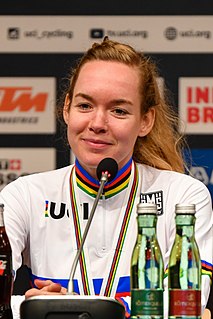 Anna van der Breggen is a Dutch former professional road bicycle racer, who rode professionally between 2009 and 2021 for Team Flexpoint, Sengers Ladies Cycling Team, Rabo–Liv and SD Worx. She won the gold medal in the women's road race at the 2016 Summer Olympics in Rio de Janeiro, and has won the Giro d'Italia Femminile on four occasions. In 2018 and 2020, she won the women's road race at the UCI Road World Championships. 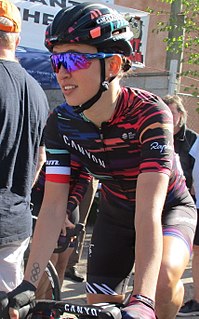 Katarzyna "Kasia" Niewiadoma is a Polish racing cyclist, who rides for UCI Women's WorldTeam Canyon–SRAM. Among her wins are the Amstel Gold Race, the Trofeo Alfredo Binda and the stage race The Women's Tour. She is a former national champion in both the road race and time trial events.

The 2017 UCI Women's World Tour was the second edition of the UCI Women's World Tour. For the 2017 season, the calendar consisted of 20 races, up from 17 in 2016. Two one-day races – the Amstel Gold Race and Liège–Bastogne–Liège, to complete an Ardennes classics week – were added along with the Ladies Tour of Norway and the Holland Ladies Tour; all 2016 races returned for the 2017 calendar, with the exception of the cancelled Philadelphia International Cycling Classic.

Movistar Team is a professional road bicycle racing women's team which participates in elite women's races. The title sponsor is the Spanish mobile telephone company Telefónica, with the team riding under the name of the company's brand Movistar.

The 2018 UCI Women's World Tour was a competition that included twenty-four road cycling events throughout the 2018 women's cycling season. It was the third edition of the ranking system launched by the Union Cycliste Internationale (UCI) in 2016. The competition began with Strade Bianche on 3 March and concluded with the Tour of Guangxi on 21 October. Anna van der Breggen of the Netherlands was the defending champion. 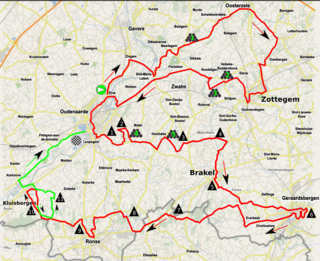 The 2018 Tour of Flanders for Women was the 15th running of the Tour of Flanders for Women, a women's bicycle race in Belgium. It was held on 1 April 2018, as the fifth race of the 2018 UCI Women's World Tour. Anna van der Breggen won the race with an attack just after the Kruisberg, at 27 km from the finish. Amy Pieters won the sprint for second place, at more than a minute from van der Breggen. Annemiek van Vleuten rounded out the entirely Dutch podium.

Demi Vollering is a Dutch professional racing cyclist, who currently rides for UCI Women's WorldTeam SD Worx. In 2019 she won the Volta Limburg Classic and the Giro dell'Emilia. In 2021 she won Liège–Bastogne–Liège, her first win in a monument classic.

The women's individual road race event at the 2020 Summer Olympics was held on 25 July 2021 on a course starting at Musashinonomori Park in Tokyo and ending at the Fuji Speedway in Shizuoka Prefecture. 67 cyclists from 40 nations competed, with 48 completing the course. 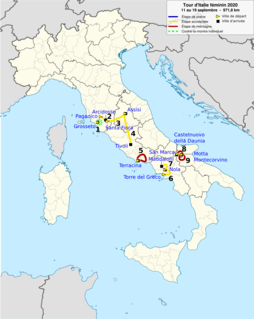 The 31st women's Giro d'Italia, or Giro Rosa, was held from 11 to 19 September 2020. It is considered the most prestigious stage race of the women's calendar and of the 2020 UCI Women's World Tour. The race was originally scheduled from 26 June to 5 July, but was postponed to mid-September due to the COVID-19 pandemic in Italy and reduced to 9 stages rather than the originally planned 10. 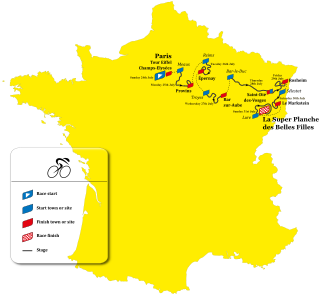 The 2022 Strade Bianche Donne was an Italian road cycling one-day race that took place on 5 March 2022. It was the 8th edition of Strade Bianche Donne and the first event of the 2022 UCI Women's World Tour. The usual first race of the season, the Cadel Evans Great Ocean Road Race in Australia was cancelled due to the COVID-19 pandemic. It was won by the Belgian national champion Lotte Kopecky.

The 2022 Giro Donne was the 33rd edition of the Giro d'Italia Femminile women's road cycling stage race. The race started on 30 June 2022 and finished on 10 July 2022. As the longest and one of the most prestigious races on the women's calendar, the event included ten stages covering over 1,000 kilometres (620 mi) across northern Italy.

Wikimedia Commons has media related to Annemiek van Vleuten .
This page is based on this Wikipedia article
Text is available under the CC BY-SA 4.0 license; additional terms may apply.
Images, videos and audio are available under their respective licenses.