Anna Margaret Glenn (née Castor; February 17, 1920 –May 19, 2020) was an American advocate for people with disabilities and communication disorders and the wife of astronaut and senator John Glenn. A stutterer from an early age, Glenn was notable for raising awareness of stuttering among children and adults as well as other disabilities.

Castor met John Glenn at a very young age when her parents became involved in the same community organizations as Glenn's parents. [4] The families developed a friendship which allowed Castor and Glenn to remain close as they grew up. [4] The pair became high school sweethearts and continued dating through college. [4] Castor attended Muskingum College where she majored in music with a minor in secretarial skills and physical education. [4] Castor was an active member of the swim team, volleyball team, and tennis team. [4] She graduated in 1942. [1] Even though she received an offer for a pipe organ scholarship from the Juilliard School, Castor declined the offer, [5] choosing instead to stay in Ohio with Glenn. Castor and Glenn were married on April 6, 1943. [1] They had two children, David, born in 1945, and Lyn, born in 1947. [6]

During the early years of her marriage to John Glenn, Annie Glenn worked as an organist in various churches and taught trombone lessons. [4]

Influence during the Space Race

Throughout the middle of the twentieth century, the Cold War tensions between the United States of America and the Soviet Union heightened. [7] In an effort to boost American citizens' confidence in their government, U.S. President Dwight Eisenhower decided to become involved in the Space Race and launch Project Mercury. [7] Seven young men were chosen for this space mission. These all-American astronauts were regarded as wholesome heroes and their wives were the picture of domestic patriotism. [8] Annie Glenn was one of the wives of the Mercury 7 astronauts. These women "rocketed to fame" [9] to become celebrities.

In her book The Astronaut Wives Club [10] (which later became a television miniseries), Lily Koppel relates that Glenn and the other six wives formed a tight-knit support group informally called the "Astronaut Wives Club," which she cites as influential in shaping American identity, as Americans found their values of family, patriotism, and consumerism embodied in Glenn. Koppel states that American women turned to Glenn, who had been elevated in the media because of her all-American family, as a role model on how to maintain a happy home, and also an indirect propagator of the American value of consumption. The appearance of the Astronaut Wives in the media was marketed to average American housewives. For example, when the wives wore a shade of "responsible pink" lipstick to a Life photoshoot, the published photographs were retouched to show the wives wearing "patriotic red" lipstick instead. The lip color was changed to represent a new, vibrant period in American history. After the magazine was published, red lipstick became a fad. Similarly, while Mercury 7 astronauts were given sporty Corvettes to drive, the wives were strongly encouraged to keep their family-friendly station wagons, which meant that the average American housewives who were following the Astronaut Wives' example also bought station wagons. As a result of Glenn and the other members of the Astronaut Wives Club, women across the U.S. were inspired to be brave and of course, to buy the same consumer goods Glenn and the other wives had in their homes. [10]

Like her father, Annie Glenn experienced a speech stutter throughout her life. [1] As a child, Glenn did not feel hindered by her stutter; she happily participated in activities such as softball, girl scouts, school dances, and choir. [4] It was not until sixth grade that she first realized her speech impairment. [4] It was determined that her stutter was present in eighty-five percent of her verbal utterances. [11] Despite her difficulty speaking, she was able to create and maintain close relationships. [4] After graduating college, Glenn wanted to get a job in a different town but because of her disability, her parents were worried about her living independently. [4] However, Glenn found ways to effectively communicate without speaking out loud. For example, before shopping, she would write down exactly what she was looking for and then show the note to the sales clerk when she needed help. [4]

At the age of 53, Glenn discovered and attended a three-week treatment course at Hollins Communications Research Institute in Roanoke, Virginia, to help with her dysfluency. [11] After attending the treatment course, her speech was greatly improved; however, she did not consider herself "cured" of stuttering. [1] Glenn was finally able to confidently vocally interact with others. [12] When her husband began campaigning for the Senate, she was able to support him by giving speeches at public events and at rallies. [1] Glenn used her newfound voice to bring attention to the disabled who she knew had been overlooked so often. [13]

In 1983, Glenn received the first national award of the American Speech and Hearing Association for her meritorious service to those with communicative disorders. [1] In 1987, the National Association for Hearing and Speech Action awarded the first annual Annie Glenn Award for achieving distinction despite a communication disorder. [1] Glenn presented the award to James Earl Jones as its first recipient. [1] She was inducted into the National Stuttering Association Hall of Fame in 2004. [14] In 2015, The Ohio State University renamed 17th Avenue (on its campus) to Annie and John Glenn Avenue. [15]

In 2009, the Ohio State University awarded her an honorary Doctorate of Public Service to recognize her work on behalf of children and others. [6] The department awards the "Annie Glenn Leadership Award" annually to a person that has displayed innovative and inspirational work in speech/language pathology. [15]

Organizations in which she was involved include:

At the time of her husband's death in December 2016, Annie and John Glenn had been married for 73 years and eight months. During the course of their marriage, the couple had two children—John David, born in 1945, and Carolyn Ann, born in 1947—and two grandchildren. [1]

Glenn was played by Mary Jo Deschanel in the 1983 film The Right Stuff . [25] The film highlighted her stutter, particularly in a scene involving U.S. Vice President Lyndon B. Johnson. [25] In a 2015 interview, she and John Glenn indicated that, although they liked the Tom Wolfe book, they did not care for the movie adaptation of The Right Stuff. [26]

In the 2015 ABC-TV series The Astronaut Wives Club , she is portrayed by Azure Parsons. [27]

Stuttering, also known as stammering and dysphemia, is a speech disorder in which the flow of speech is disrupted by involuntary repetitions and prolongations of sounds, syllables, words or phrases as well as involuntary silent pauses or blocks in which the person who stutters is unable to produce sounds. The term stuttering is most commonly associated with involuntary sound repetition, but it also encompasses the abnormal hesitation or pausing before speech, referred to by people who stutter as blocks, and the prolongation of certain sounds, usually vowels or semivowels. According to Watkins et al., stuttering is a disorder of "selection, initiation, and execution of motor sequences necessary for fluent speech production". For many people who stutter, repetition is the main problem. The term "stuttering" covers a wide range of severity, encompassing barely perceptible impediments that are largely cosmetic to severe symptoms that effectively prevent oral communication. In the world, approximately four times as many men as women stutter, encompassing 70 million people worldwide, or about 1% of the world's population. 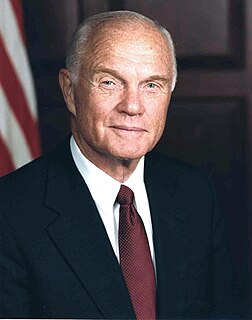 John Herschel Glenn Jr. was a United States Marine Corps aviator, engineer, astronaut, businessman, and politician. He was the first American to orbit the Earth, circling it three times in 1962. Following his retirement from NASA, he served from 1974 to 1999 as a Democratic United States senator from Ohio, and, in 1998, flew into space again at age 77.

The Mercury Seven were the group of seven astronauts selected to fly spacecraft for Project Mercury. They are also referred to as the Original Seven and Astronaut Group 1. Their names were publicly announced by NASA on April 9, 1959. These seven original American astronauts were Scott Carpenter, Gordon Cooper, John Glenn, Gus Grissom, Wally Schirra, Alan Shepard, and Deke Slayton. The Mercury Seven created a new profession in the United States, and established the image of the American astronaut for decades to come. 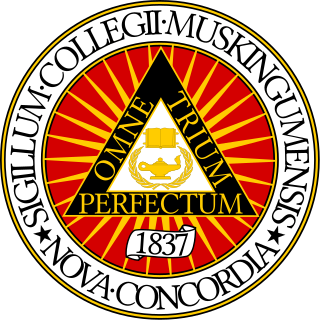 Muskingum University is a private liberal arts college in New Concord, Ohio. Chartered in 1837 as Muskingum College, the institution is affiliated with the Presbyterian Church (USA). 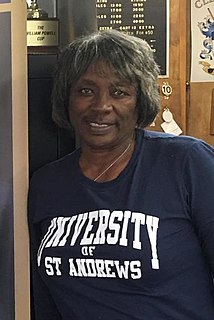 Renee Powell is an American professional golfer who played on the US-based LPGA Tour and is currently head professional at her family's Clearview Golf Club in East Canton, Ohio. She was the second African-American woman ever to play on the LPGA Tour.

There are many references to stuttering in popular culture. Because of the unusual-sounding speech that is produced, as well as the behaviors and attitudes that accompany a stutter, stuttering has been a subject of scientific interest, curiosity, discrimination, and ridicule.

Lily Koppel is a writer living in New York City. She is known for her books The Red Leather Diary (2008) and The Astronaut Wives Club (2013).

Stuttering therapy is any of the various treatment methods that attempt to reduce stuttering to some degree in an individual. Stuttering can be a challenge to treat because there is a lack of evidence-based consensus about therapy. Some believe that there is no cure for the condition.

Betty Lavonne Grissom was the plaintiff in a successful lawsuit against a NASA contractor which established a precedent for families of astronauts killed in service to receive compensation. Her husband Gus Grissom, one of the Mercury Seven astronauts, died in the first fatal accident in the history of the United States space program. Ms. Grissom has been portrayed in the books The Right Stuff by Tom Wolfe and The Astronaut Wives Club by Lily Koppel and by the actors Veronica Cartwright and JoAnna Garcia in the film and television adaptations of those books.

Rene Carpenter is the former wife of Scott Carpenter, one of the Mercury 7 astronauts. She was one of the Astronaut Wives Club.

The Astronaut Wives Club is an American period drama television series developed by Stephanie Savage for ABC. It is based on Lily Koppel's book of the same name. The series tells the story of the wives of the Mercury Seven—America's first group of astronauts—who together formed the Astronaut Wives Club. Actresses Dominique McElligott, Yvonne Strahovski, Joanna García Swisher, Erin Cummings, Azure Parsons, Zoe Boyle, and Odette Annable play the roles of the astronauts' wives.

Azure Parsons is an American actress. She has appeared in a number of films, including 2 Guns, Paradise, and Dark Places, and television shows like Death Valley, Castle, and True Detective. In 2014, Parsons was cast as a recurring character in the first season of the fantasy drama series Salem on WGN America. In 2016, she returned to recur in the third season of Salem. She starred as Annie Glenn on the ABC drama series The Astronaut Wives Club. 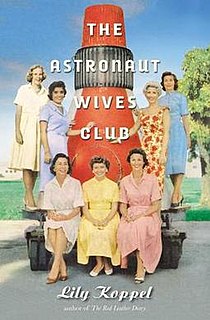 The Astronaut Wives Club is a 2013 New York Times Bestselling book by the American author Lily Koppel based on the experiences of the Astronaut Wives Club, who were wives of US astronauts. It was first published on June 11, 2013 through the Hachette Book Group and provided the basis for the 2015 television series of the same name.

Zoe Boyle is an English actress known for her roles as Lavinia Swire on the series Downton Abbey and Trinity Ashby on Sons of Anarchy.

The John & Annie Glenn Museum is a museum in New Concord, Ohio, United States, honoring astronaut and senator John Glenn and his wife Annie Glenn. It is located at the site of Glenn's boyhood home, which has been moved back to Main Street in New Concord, Ohio and restored as it was when he lived there until his enlistment in World War II.