Anritsu Corporation was formed with the merger of two companies, the Annaka Corporation and Kyoritsu Electric in Japan in 1931. In 1990, Anritsu acquired Wiltron Company in the United States for $180 million. [5]

Panasonic Corporation, formerly known as the Matsushita Electric Industrial Co., Ltd., founded by Kōnosuke Matsushita in 1918 as a lightbulb socket manufacturer, is a major Japanese multinational electronics company, headquartered in Kadoma, Osaka. In addition to consumer electronics of which it was the world's largest maker in the late 20th century, Panasonic offers a wide range of products and services, including rechargeable batteries, automotive and avionic systems, as well as home renovation and construction. 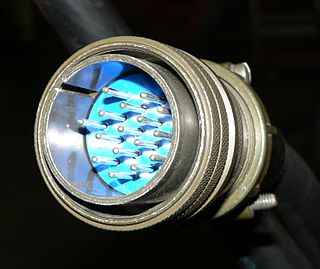 Amphenol Corporation is a major producer of electronic and fiber optic connectors, cable and interconnect systems such as coaxial cables. Amphenol is a portmanteau from the corporation's original name, American Phenolic Corp.

Telekom Malaysia Berhad (TM) is a Malaysian telecommunications company founded in 1984. Beginning as the national telecommunications company for fixed line, radio and television broadcasting services, it has evolved to become the country's largest provider of broadband services, data, fixed-line, pay television and network services. TM ventured into the Long Term Evolution (LTE) space with the launch of TMgo, its first 4G offering. TM's 850 MHz service was rebranded as unifi Mobile in January 2018.

Yokogawa Electric Corporation is a Japanese multinational electrical engineering and software company, with businesses based on its measurement, control, and information technologies.

Toho Zinc Co., Ltd. is a Japanese manufacturer of zinc related products. Established in 1937, it smelts nonferrous metals such as lead and zinc and produces electronic components. There are seven branches in Japan and two branches in China, in Hong Kong and Shanghai. The company was responsible for cadmium poisoning on Tsushima Island in the late twentieth century.

MACOM Technology Solutions is a developer and producer of radio, microwave, and millimeter wave semiconductor devices and components. The company is headquartered in Lowell, Massachusetts, and in 2005 was Lowell's largest private employer. MACOM is certified to the ISO 9001 international quality standard and ISO 14001 environmental standard. The company has design centers and sales offices in North America, Europe, Asia and Australia.

The history of AT&T dates back to the invention of the telephone. The Bell Telephone Company was established in 1877 by Alexander Graham Bell, who obtained the first US patent for the telephone, and his father-in-law, Gardiner Greene Hubbard. Bell and Hubbard also established American Telephone and Telegraph Company in 1885, which acquired the Bell Telephone Company and became the primary telephone company in the United States. This company maintained an effective monopoly on local telephone service in the United States until anti-trust regulators agreed to allow AT&T to retain Western Electric and enter general trades computer manufacture and sales in return for its offer to split the Bell System by divesting itself of ownership of the Bell operating Companies in 1982.

Ibiden Co., Ltd. is a Japanese electronics company headquartered in Ogaki, Gifu prefecture that manufactures electronics-related products, such as printed circuit boards and IC packaging. The company also makes ceramics products, including particulate filters for diesel engines, for which it has a 50% market share in Europe.

Ushio, Inc. is a Japanese company headquartered in Tokyo. It was established in 1964, and its main business is in lighting equipment.