The Ansel Adams Wilderness is a wilderness area in the Sierra Nevada of California, United States. The wilderness spans 231,533 acres (93,698 ha); 33.9% of the territory lies in the Inyo National Forest, 65.8% is in the Sierra National Forest, and the remaining 0.3% covers nearly all of Devils Postpile National Monument. [1] Yosemite National Park lies to the north and northwest, while the John Muir Wilderness lies to the south.

In 1984, after his death, the area was expanded and renamed in memory of Ansel Adams, well-known environmentalist and nature photographer who is famous for his black-and-white landscape photographs of the Sierra Nevada.

The centerpiece of the Ansel Adams wilderness is the Ritter Range, which includes dark metavolcanic glaciated mountains such as Mount Ritter, Banner Peak, and The Minarets.

Immediately to the east of the Ritter Range is the Middle Fork of the San Joaquin River, [3] which contains Devils Postpile, a series of basaltic columns that were revealed and smoothed by glacier action. The Middle Fork originates from Thousand Island Lake, at the foot of Banner Peak, one of the largest backcountry lakes in the Sierra. [3]

To the east of the Middle Fork canyon is the true Sierra Crest, which, at roughly 10,000 feet (3,000 m) of elevation is lower than the Ritter Range. [3] This relatively low region of the Crest allows winter storms through and cause large amounts of snowfall on Mammoth Mountain, which sits in the gap. The gap also allows migration of plants and animals across the Sierra Crest. [3]

To the west of the Ritter Range lies the canyon of the North Fork of the San Joaquin, a relatively remote and unvisited high-country area. The southern part of the wilderness contains the 3,000 feet (900 m) deep canyon of the main San Joaquin River, which flows out of the Sierra Nevada to California's Central Valley. [3]

The wilderness contains 349 miles (562 km) of hiking trails, including portions of the John Muir and Pacific Crest Trails. [3] The Sierra High Route, an off-trail route described by Steve Roper, runs along the base of the Ritter Range, through the wilderness. [5]

The Middle Fork of the San Joaquin receives the most visitors: a mandatory bus is required for visitors to reach Devils Postpile from the Mammoth Mountain Ski Area during the summer.

The Minarets are a well-known area for technical rock climbing. [3] 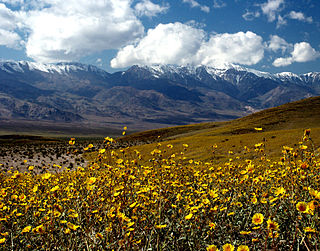 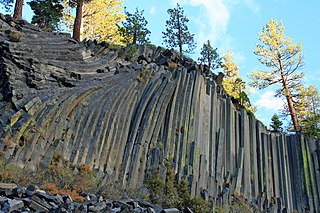 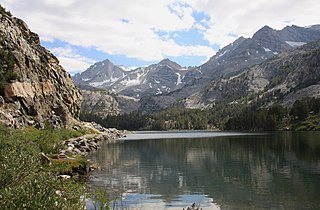 The John Muir Wilderness is a wilderness area that extends along the crest of the Sierra Nevada of California for 90 miles (140 km), in the Inyo and Sierra National Forests. Established in 1964 by the Wilderness Act and named for naturalist John Muir, it encompasses 652,793 acres (2,641.76 km2). The wilderness lies along the eastern escarpment of the Sierra from near Mammoth Lakes and Devils Postpile National Monument in the north, to Cottonwood Pass near Mount Whitney in the south. The wilderness area also spans the Sierra crest north of Kings Canyon National Park, and extends on the west side of the park down to the Monarch Wilderness. 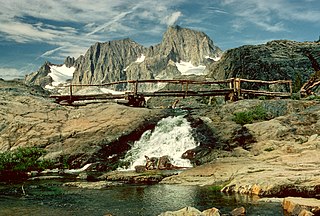 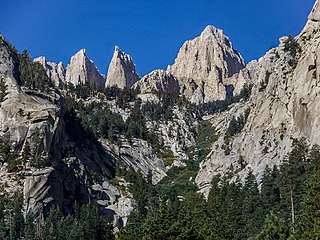 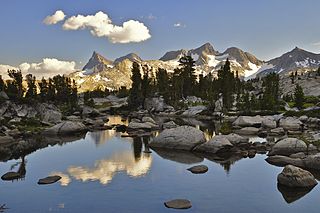 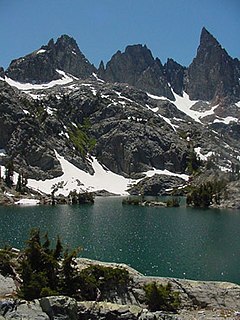 The Sierra High Route is a cross-country hiking route, 195 miles (314 km) long, through the Sierra Nevada. It was scouted by Steve Roper and described by him in his book Sierra High Route: Traversing Timberline Country.

Minaret Lake is a lake in the Ritter Range, a subrange of the Sierra Nevada, in California. It is located in extreme northeastern Madera County, within the Ansel Adams Wilderness of the Inyo National Forest. 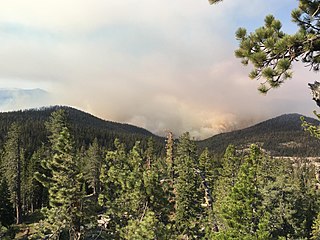 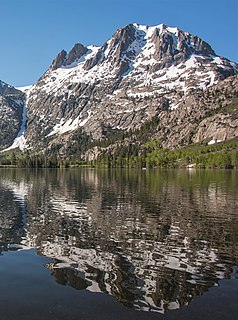 Carson Peak is a 10,908-foot-elevation mountain summit located in the Sierra Nevada mountain range, in Mono County of northern California, United States. It is situated in the Ansel Adams Wilderness, on land managed by Inyo National Forest. It is approximately 3.5 miles (5.6 km) southwest of the community of June Lake, 2.0 miles (3.2 km) south of Silver Lake, and 2.25 miles (3.62 km) northwest of San Joaquin Mountain, the nearest higher neighbor. The mountain is visible from various locations along the June Lake Loop, and from the nearby June Mountain ski area. The summit offers impressive views of Mount Ritter and Banner Peak. Topographic relief is significant as it rises 3,700 feet (1,130 meters) above the valley in 1.2 mile. The mountain consists of granite of Lee Vining Canyon. Carson Peak is considered an eastern Sierra classic by backcountry skiers drawn to routes called the "Devils Slide" and "Petes Dream".