Born in Ribeira da Barca in 1944, Monteiro went to university in Belgium and graduated with his law degree from the Catholic University of Leuven.

During the PAICV's single-party government, Monteiro served in various high level positions. He was the Secretary-General of the National Assembly from 1977 to 1980 and President of the Supreme Court of Justice from 1980 to 1990. [2]

Affiliated with the Movement for Democracy, he was the first president elected in a multi-party election in the country, defeating Aristides Pereira in the February 1991 presidential election. [3]

On February 1995, he awarded one of the archipelago's greatest writer during the colonial era Eugénio Tavares the Medal of the Ordem do Vulcão. [4]

He was re-elected without opposition in 1996, receiving 80% of the vote. After serving two five year terms, he stepped down in 2001; in the 2001 election, Movement for Democracy candidate Carlos Veiga, who had served as Prime Minister under Monteiro, was defeated by Pedro Pires of the African Party for the Independence of Cape Verde (PAICV).

On 19 September 2006, it was announced that Monteiro would succeed Sukehiro Hasegawa as head of the United Nations mission in East Timor. [5] The appointment was criticized in East Timor, partly because Monteiro had a poor knowledge of English. [6] It was reported that Timorese president Xanana Gusmão was among those who expressed their concern about the appointment.

On 25 September, Monteiro announced that he had changed his mind and would not be accepting the position. He told journalists that "I told the Deputy Secretary-General that I already knew that there were reservations about my name on the part of parties engaged in East Timor and that I was no longer interested in serving there." He explained that "the functions of a representative of the UN Secretary-General in East Timor are very broad and must be exercised with the goodwill of all parties involved." [7] Therefore, "it is better to stand down now than to create problems later on, especially in view of the complexity of the situation in East Timor." [7]

Monteiro was a Member of the Global Leadership Foundation, an organization which works to support democratic leadership, prevent and resolve conflict through mediation and promote good governance in the form of democratic institutions, open markets, human rights and the rule of law. It does so by making available, discreetly and in confidence, the experience of former leaders to today’s national leaders. It is a not-for-profit organization composed of former heads of government, senior governmental and international organization officials who work closely with Heads of Government on governance-related issues of concern to them.

Monteiro's wife, Antonina Mascarenhas Monteiro, known widely as Tuna Mascarenhas, the former First Lady of Cape Verde, died in Praia on September 8, 2009, at the age of 65. [8] He had three children, Gamal, Marisa and Liliana.

The Movement for Democracy is a Christian democratic and liberal party in Cape Verde. Established in 1990, it was the ruling party from 1991 to 2001 and returned to power in the 2016 parliamentary election. Its members are nicknamed "os ventoinhas". 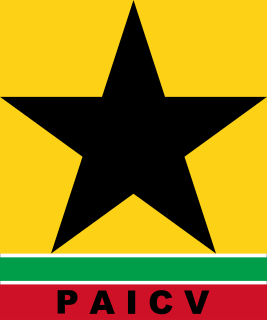 The African Party of Independence of Cape Verde is a social democratic political party in Cape Verde. It was formerly a Marxist–Leninist communist party. Its members are nicknamed "os tambarinas" in Portuguese, and they identify themselves with the color yellow. 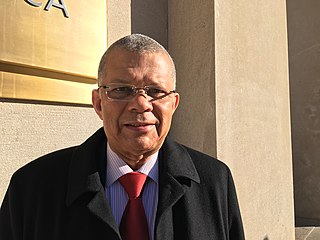 Presidential elections were held in Cape Verde on 7 August 2011, with a second round run-off on 21 August. The result was a victory for Jorge Carlos Fonseca of the Movement for Democracy, who received 54% of the vote in the second round.