Antal Szerb (1 May 1901, Budapest – 27 January 1945, Balf) was a noted Hungarian scholar and writer. He is generally considered to be one of the major Hungarian writers of the 20th century.

Szerb was born in 1901 to assimilated Jewish parents in Budapest, but baptized Catholic. He studied Hungarian, German and later English, obtaining a doctorate in 1924. From 1924 to 1929 he lived in France and Italy, also spending a year in London, England, from 1929 to 1930.

As a student, he published essays on Georg Trakl and Stefan George, and quickly established a formidable reputation as a scholar, writing erudite studies of William Blake and Henrik Ibsen among other works. Elected President of the Hungarian Literary Academy in 1933, aged just 32, he published his first novel, The Pendragon Legend (which draws upon his personal experience of living in Britain) the following year. His second and best-known work, Utas és holdvilág (Journey by Moonlight) came out in 1937. He was made a Professor of Literature at the University of Szeged the same year. He was twice awarded the Baumgarten Prize , in 1935 and 1937. Szerb also translated books from English, French, and Italian, including works by Anatole France, P. G. Wodehouse, and Hugh Walpole. [1]

In 1941 he published a History of World Literature which continues to be authoritative today. He also published a volume on the theory of the novel and a book about the history of Hungarian literature. Given numerous chances to escape anti-Semitic persecution (as late as 1944), he chose to remain in Hungary, where his last novel, a Pirandellian fantasy about a king staging a coup against himself, then having to impersonate himself, Oliver VII , was published in 1942. It was passed off as a translation from the English, as no 'Jewish' work could be printed at the time.

During the 1940s, Szerb faced increasing hostility due to his Jewish background. In 1943, Szerb's History of World Literature was put on a list of forbidden works. During the period of Communist rule, it would also be censored, with the chapter on Soviet literature redacted, and the full version would only be available again in 1990. Szerb was deported to a concentration camp in Balf late in 1944. Admirers of his attempted to save him with falsified papers, but Szerb turned them down, wanting to share the fate of his generation. [2] He was beaten to death there in January 1945, at the age of 43. He was survived by his wife, Klára Bálint, who died in 1992. [3]

Szerb is best known for his academic works on literature. In the ten years before the Second World War, he wrote two monumental works of literary criticism, characterized by a brilliant and ironic style intended for an educated reader rather than an academic public. [4]

In addition, Szerb wrote novellas and novels that still attract the attention of the reading public. The Pendragon Legend, Journey by Moonlight and The Queen's Necklace, for instance, fuse within the plot the aims of the literary critic with the aims of the novel writer. The author gives importance to the exotic in these novels, with a meta-literary outlook. In these three novels, the stage of the narrative action is always a Western European country: leaving quotidian Hungary allows the writer to transfigure the actions of his characters.

In his first novel, The Pendragon Legend, Szerb offers to his readers a representation of the United Kingdom and its inhabitants. England and, in particular, London, hosted Szerb for a year and not only suggested to him new and interesting directions for his research, but also offered him the background for his first novel. The Pendragon Legend is a detective story that begins in the British Museum and finishes in a Welsh castle. The author provides a non-native's look at the country, in a way that is consistent with the parody genre.

In The Quest for the Miraculous: Survey and Problematic in the Modern Novel , Szerb claims that among the literary genres he prefers the fantasy novel. It fuses the quotidian details of everyday life with the fantastic feats that he calls “the miracle”. In the case of The Pendragon Legend, this allows the reader a cathartic experience through the adventures of the Hungarian philologist who serves as the protagonist of the novel.

Utas és holdvilág (literally, "Traveler and Moonlight"), published in 1937, focuses on the development of the main character, Mihály - a bright and romantic, albeit conflicted, young man who sets off for a honeymoon in Italy with his new wife, Erzsi. Mihály quickly reveals his bizarre childhood experiences to her over a bottle of wine, alluding to a set of seemingly unresolved longings for eroticism and death which Erzsi seems to only vaguely comprehend. The plainspoken disharmony between the newlyweds leads to Mihály's detached self-recognition: he is not ready to be Erzsi's husband. He then leaves his wife for his own journey through the Italian countryside and eventually Rome - figuratively tracing the sparkling fanaticisms of his juvenile imagination, even rekindling bonds with changed (and some unchanged) childhood friends - all among the impressive foreign landscapes and peculiar liveliness of its inhabitants. Szerb celebrates the exotic cult of Italy, the leitmotif of thousands of writers from the past and present, relaying his own travel impressions of Italy though the mind of his eccentric protagonist, Mihály. Szerb explores the altogether interrelatedness of love and youthfulness within bourgeois society.

Szerb also published an interesting diary, The Third Tower , recounting his travels to the cities in the north of Italy - Venice, Bologna, Ravenna. [5] Before going back home, he visited San Marino, Europe's oldest state, and Montale (San Marino) inspired the title of the book. The diary is divided into paragraphs which alternate descriptions with his personal thoughts.

Pendragon or Pen Draig, is the epithet of Uther, father of King Arthur in medieval and modern Arthurian literature and occasionally applied to historical Welsh heroes in medieval Welsh poetry, such as Rhodri ab Owain Gwynedd. 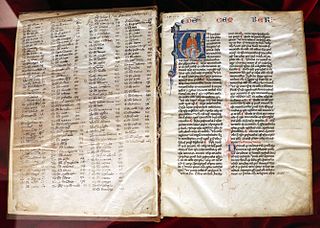 The Golden Legend is a collection of hagiographies by Jacobus de Voragine that was widely read in late medieval Europe. More than a thousand manuscripts of the text have survived. It was likely compiled around the years 1259–1266, although the text was added to over the centuries.

Journey by Moonlight is a 1937 novel by Hungarian writer Antal Szerb. It is among the best-known novels in contemporary Hungarian literature. According to English literary critic Nicholas Lezard, it is "one of the greatest works of modern European literature [...] I can't remember the last time I did this: finished a novel and then turned straight back to page one to start it over again. That is, until I read Journey by Moonlight." 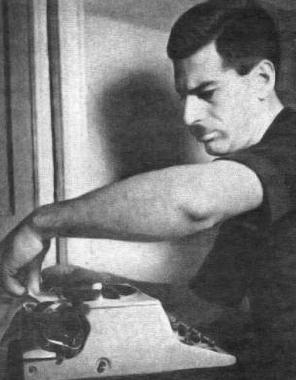 Elio Vittorini was an Italian writer and novelist. He was a contemporary of Cesare Pavese and an influential voice in the modernist school of novel writing. His best-known work is the anti-fascist novel Conversations in Sicily, for which he was jailed when it was published in 1941. The first U.S. edition of the novel, published in 1949, included an introduction from Ernest Hemingway, whose style influenced Vittorini and that novel in particular.

Frigyes Karinthy was a Hungarian author, playwright, poet, journalist, and translator. He was the first proponent of the six degrees of separation concept, in his 1929 short story, Chains (Láncszemek). Karinthy remains one of the most popular Hungarian writers. He was the brother of artist Ada Karinthy and the father of poet Gábor Karinthy and writer Ferenc Karinthy.

Jacob Sager Weinstein is an American author, humorist, comedy writer, and screenwriter. For three years he was a staff writer for Dennis Miller Live, for which he received a Writers Guild of America award in 2001. Earlier he was a contributor to The Onion, and he has also written for McSweeney's Internet Tendency, the North American Review, and The New Republic.

Len Rix is a translator of Hungarian literature into English, noted for his translations of Antal Szerb's Journey by Moonlight and The Pendragon Legend and of Magda Szabó's The Door and Katalin Street.

The Pendragon Legend is a 1934 novel by the Hungarian writer Antal Szerb. It was published by Pushkin Press.

Oliver VII is a 1942 novel by Antal Szerb. The first English translation was published in 2007. In the book, the restless ruler of an obscure central European state plots a coup d'état against himself and escapes to Venice in search of ‘real’ experience. There he falls in with a team of con men and ends up, to his own surprise, impersonating himself. His journey through successive levels of illusion and reality teaches him much about the world, about his own nature and the paradoxes of the human condition.

Big Read is the Hungarian version of the BBC Big Read.

Peter Hargitai is a poet, novelist, and translator of Hungarian literature.

Peter Andrew Sherwood is a British Professor of Linguistics, who was born in Hungary, and left the country with his family after 1956. He is a writer, editor, translator and lexicographer and as the Laszlo Birinyi Sr., Distinguished Professor in Hungarian Language and Culture at the University of North Carolina at Chapel Hill. 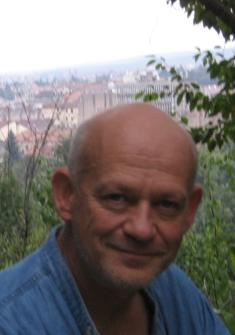