Antisana presents one of the most challenging technical climbs in the Ecuadorian Andes.[ citation needed ]

Mikakucha is a lake in the Napo Province in Ecuador. It is situated in the Antisana Ecological Reserve, southwest of the volcano Antisana.

Below is a list of (almost) all volcanoes in the world. 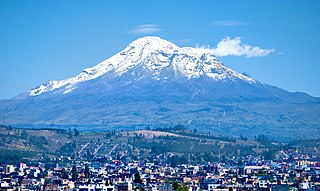 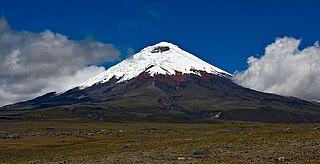 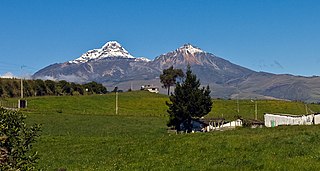 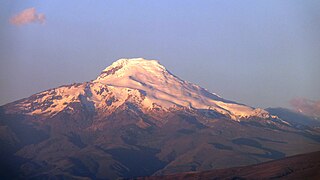 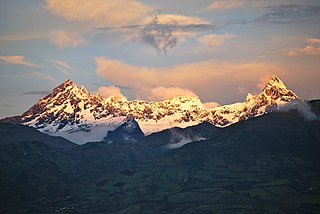 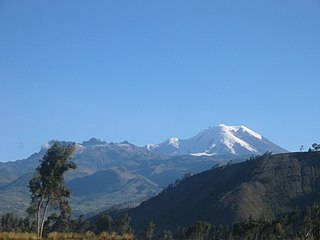 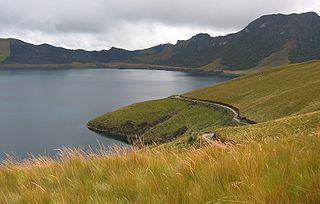 Mojanda is an inactive stratovolcano of the Eastern Cordillera of the Andes in northern Ecuador. A summit caldera, which was produced by an explosive Plinian Eruption that marked the end of Mojanda activity 200,000 years ago, is occupied by three crater lakes: Karikucha, Yanakucha, and Warmikucha. Having received protected status in 2002, they are a popular tourist destination and are about 20 minutes taxi ride from the largely indigenous town of Otavalo. 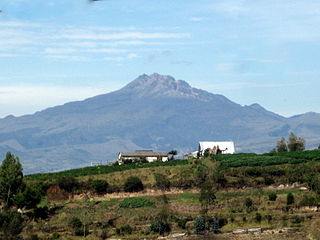 The Andean Volcanic Belt is a major volcanic belt along the Andean cordillera in Argentina, Bolivia, Chile, Colombia, Ecuador and Peru. It formed as a result of subduction of the Nazca Plate and Antarctic Plate underneath the South American Plate. The belt is subdivided into four main volcanic zones that are separated from each other by volcanic gaps. The volcanoes of the belt are diverse in terms of activity style, products and morphology. While some differences can be explained by which volcanic zone a volcano belongs to, there are significant differences within volcanic zones and even between neighboring volcanoes. Despite being a type location for calc-alkalic and subduction volcanism, the Andean Volcanic Belt has a large range of volcano-tectonic settings, such as rift systems and extensional zones, transpressional faults, subduction of mid-ocean ridges and seamount chains apart from a large range on crustal thicknesses and magma ascent paths, and different amount of crustal assimilations. 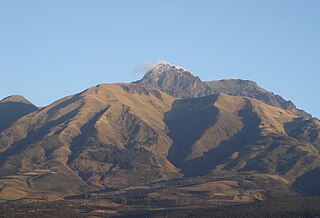 Cotacachi is a dormant volcano in the Western Cordillera of the northern Ecuadorian Andes, in the west of Imbabura Province, above the city of Cotacachi. It has a summit elevation of 4,944 m (16,220 ft) above sea level and its highest elevations are capped with snow.

Chacana is a large 32-km long - 18-24 km wide caldera that has erupted in historical times. It forms one of the largest rhyolite centers in the Northern Andes with major eruptions over the past 240,000, 180,00, and 160,000 years ago and has had andesitic-rhyolitic volcanism. With dactic lava flows continuing into historical times. Lava domes were also constructed in the Holocene. Chacana is located 30 km from Quito and the large Antisana volcano is constructed to the southeast.