Gabriel Anton Walter (5 February 1752 – 11 April 1826) was a builder of pianos. The Grove Dictionary of Music and Musicians describes him as "the most famous Viennese piano maker of his time". [1]

Walter was born in Neuhausen auf den Fildern, Germany. [1] The record of his marriage to a widow named Anna Elisabeth Schöffstoss in 1780 indicates that he had moved to Vienna by that time. [2] His earlier surviving pianos are dated to this year. [1]

His piano business was evidently successful. In 1790 he was awarded the status of Imperial Royal Chamber Organ Builder and Instrument Maker. [1] By 1800 he was employing about 20 workmen. [1] In that year he was joined in the firm by his stepson Joseph Schöffstoss, and the pianos came to be labeled "Anton Walter und Sohn" ("and son"). [1] The last surviving Walter piano is dated 1825, and he died the following year. [1]

Walter's instruments are classified within the so-called "Viennese" school of piano design. This school originated with Johann Andreas Stein, who built pianos in Augsburg. [1] In Viennese instruments, the head of the hammer is closer to the player than the hinge, and the hammer is made to rise when its short opposite end is caught on a hook. Like all early pianos, those of the Viennese school were of far lighter construction than modern instruments and had a quite distinct sound; for general discussion, see fortepiano.

Walter improved on Stein's design by adding to the action a back check, which caught the hammer on its descent, preventing it from bouncing up and down in lively playing. [1] This innovation was generally adopted by other Viennese makers in Walter's time, and remains standard in the modern piano. [1] Its importance is illustrated by an observation of Palmieri and Palmieri, namely that modern replicas of Stein pianos commonly include a back check even though it is not historically authentic on these instruments. [3]

Walter's career extended over several decades, and his instruments evolved with the times, with ever heavier construction as the piano began its shift from the lightweight Classical-era norm toward its far heavier modern incarnation, achieved by about 1870. He died in Vienna, aged 74.

Wolfgang Amadeus Mozart bought a Walter piano in about 1782, [1] and employed it in one of the most important phases of his career, the composition and highly successful premieres of his mature piano concertos (see: Mozart piano concertos). [4] In about 1800 (nine years after Mozart's death), this instrument was apparently considerably modified by the Walter firm. [1] It survives today (and is kept in Salzburg, previously having been the property of Mozart's son Carl in Milan), but cannot provide reliable testimony for Mozart's own performance practice due to Walter's modifications: the type of hammer mechanism appears to have been changed and furthermore when Mozart owned the piano there may only have been hand operated levers for the dampers. A Walter instrument in Nuremberg, inv. MIR 1098, dated ca. 1790 by Latcham, uses hand operated levers. Contemporary and earlier instruments by Johann Andreas Stein, liked and played by Mozart, do have the knee levers for the dampers.

The following list is not complete. For more on Walter and his pianos, see the relevant chapter in: Michael Latcham, Pianos for Haydn, Mozart and Beethoven: change and contrast, published by Katzbichler, Munich and Salzburg, 2017

In modern times, fortepianos have been constructed by a number of builders for purposes of historically informed performance of 18th century and early 19th century music. For this purpose Walter's instruments have been important, serving as the model for instruments constructed by Philip Belt, Chris Maene, Paul McNulty, Paul Poletti, and Rodney Regier, among others. [11]

Recordings made with originals and replicas of Walter's pianos

Wolfgang Amadeus Mozart, baptised as Joannes Chrysostomus Wolfgangus Theophilus Mozart, was a prolific and influential composer of the Classical period. Despite his short life, his rapid pace of composition resulted in more than 800 works of virtually every genre of his time. Many of these compositions are acknowledged as pinnacles of the symphonic, concertante, chamber, operatic, and choral repertoire. Mozart is widely regarded as among the greatest composers in the history of Western music, with his music admired for its "melodic beauty, its formal elegance and its richness of harmony and texture". 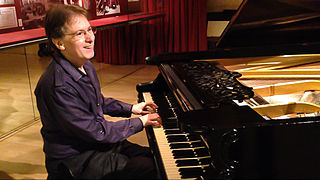 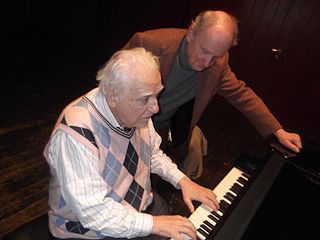 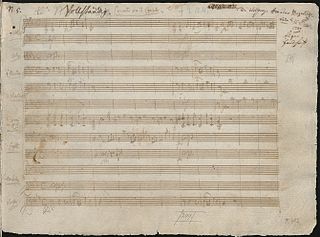 The Piano Concerto No. 22 in E♭ major, K. 482, is a work for piano, or fortepiano, and orchestra by Wolfgang Amadeus Mozart, composed in December 1785. 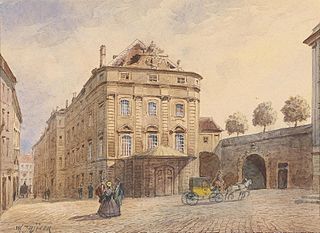 Theater am Kärntnertor or Kärntnertortheater was a prestigious theatre in Vienna during the eighteenth and nineteenth centuries. Its official title was Kaiserliches und Königliches Hoftheater zu Wien.

Kristian Bezuidenhout is an Australian pianist, who specializes in performances on early keyboard instruments.