He is known for having an extra digit on each hand and foot.

Alfonseca was originally signed by the Montreal Expos as a non-drafted free agent in July 1989. On December 13, 1993, he was taken by the Florida Marlins from the Montreal Expos in the 1993 expansion draft. He made his debut during the 1997 season, and his rookie campaign saw him win a World Series ring with the Marlins. His best year was in 2000 with the Marlins, when he led the National League in saves with 45, and won the National League Rolaids Relief Man of the Year.

At the end of the 2001 season, Alfonseca had surgery to repair a herniated disc. Subsequently, the Marlins asked Alfonseca to lose 15 pounds to help to relieve stress on his back. At a weigh-in during 2002 spring training, Alfonseca had a confrontation with Dale Torborg, the son of then manager Jeff Torborg, and a former professional wrestler. [1] While the Marlins denied any connection, shortly afterwards, on March 27, 2002, he was traded, along with Matt Clement, to the Chicago Cubs for Julián Tavárez, Ryan Jorgensen, Dontrelle Willis, and minor league pitcher Jose Cueto.

On September 2, 2003, while with the Cubs, Alfonseca was thrown out of a game for bumping an umpire with his stomach. [2] He was subsequently suspended for five games. [3]

After the 2004 season, he filed for free agency, and signed back with the Marlins, but in July 2005, he suffered a right elbow injury and missed the rest of the season. He was released by the Marlins, signed with the Rangers, but after another mid-season elbow injury was released by them. He pitched for the Phillies in 2007 and for the Lancaster Barnstormers and Bridgeport Bluefish of the Atlantic League from 2009 to 2011.

His nicknames are El Pulpo ("The Octopus"), The Dragonslayer, and Six-Fingers. He has six fingers on each hand and six toes on each foot, a condition known as polydactyly. His grandfather also had this trait. Alfonseca regards it with pride, as a kind of family emblem. [4]

Alfonseca and his wife Rocio have two sons: Antonio, Jr. and Mark Anthony, and two daughters, Jenitza and Asia. [5] 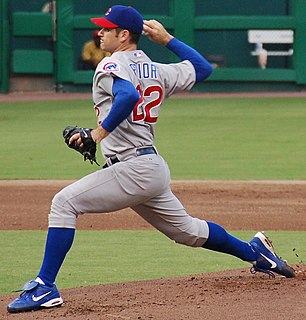 Mark William Prior is an American former professional baseball pitcher and current coach. A onetime top prospect of the Chicago Cubs, he pitched for the team from 2002 to 2006 in a career that was marred by injuries. In his prime, his repertoire of pitches included a mid-90s mph fastball, a curveball, and a changeup. He is currently the pitching coach for the Los Angeles Dodgers. 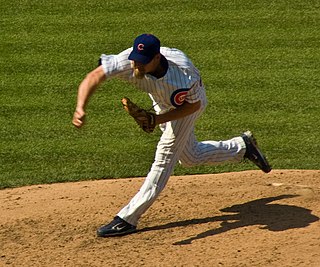 Dontrelle Wayne Willis, nicknamed "The D-Train", is an American former left-handed professional baseball pitcher. He played in Major League Baseball for the Florida Marlins, Detroit Tigers, Arizona Diamondbacks and Cincinnati Reds. Willis was notable for his success during his first few years in the major leagues and for his unconventional pitching style, which included a high leg kick and exaggerated twisting away from the batter. He was named the 2003 National League Rookie of the Year.

Michael Patrick Barrett is an American former professional baseball player and current catching coordinator for the Washington Nationals of the Major League Baseball (MLB). He played in MLB as a catcher and started his professional career with the Montreal Expos at age 18. Barrett spent three years playing in Minor League Baseball as a shortstop and catcher. He played with the Honolulu Sharks, West Palm Beach Expos, and Delmarva Shorebirds, and was elected to two Minor League All-Star games. Barrett made his MLB debut in 1998 as a third baseman, but was shortly outrighted to the minor leagues to play with the Harrisburg Senators for a season. 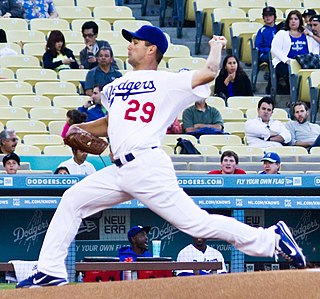 Ismael Valdéz Alvarez is a Mexican former professional baseball pitcher. During his major league career, he was nicknamed "The Rocket" in his native Mexico. 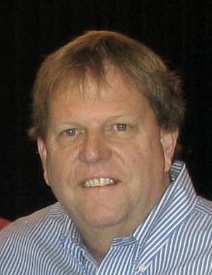 James Hendry is currently a special assistant for New York Yankees GM Brian Cashman, and is a former Vice President/General Manager of the Chicago Cubs. Hendry was promoted to GM on July 5, 2002 by former Cubs President/CEO Andy MacPhail. He worked for the Cubs from 1995 to 2011. Prior to his promotion to GM, he was named Assistant GM/Player Personnel Director on October 12, 2001, and previously the Director of Player Development, in charge of both Scouting and Minor League Operations.

Bruce Kenneth Walton is an American professional baseball coach and former player who is the pitching coach for the Jacksonville Jumbo Shrimp. He was a pitcher in Major League Baseball (MLB) from 1991 to 1994, with the Oakland Athletics, Montreal Expos, and Colorado Rockies.

The Florida Marlins' 2002 season was the tenth season for the Major League Baseball (MLB) franchise in the National League. It would begin with the team attempting to improve on their season from 2001. Their manager was Jeff Torborg. They played home games at Pro Player Stadium. They finished with a record of 79-83, 4th in the NL East.

Héctor Luis Rondón is a Venezuelan former professional baseball pitcher. He played in Major League Baseball (MLB) for the Chicago Cubs, Houston Astros, and Arizona Diamondbacks. Rondón signed as an international free agent with the Cleveland Indians in 2004.

James Clayton Russell is an American professional baseball pitcher for the Algodoneros de Unión Laguna of the Mexican League. He played college baseball at Navarro College and the University of Texas at Austin. He was drafted by the Chicago Cubs in the 14th round of the 2007 Major League Baseball draft out of the University of Texas at Austin and made his Major League Baseball (MLB) debut on April 5, 2010. He has also played for the Atlanta Braves and Philadelphia Phillies.

Brian Patrick Schlitter is an American professional baseball relief pitcher for the Seattle Mariners organization. He has played in Major League Baseball (MLB) for the Chicago Cubs and Oakland Athletics, and in Nippon Professional Baseball (NPB) for the Saitama Seibu Lions.