In Spain and New Spain

Antonio Caballero was born into a hidalgo family in Córdoba. His parents were Juan Caballero y Espinar and Antonia de Góngora. He studied first in Córdoba. At the age of 15 he received a scholarship to study theology in the Colegio de San Bartolomé y Santiago in Granada. He continued his studies at the Colegio Imperial de Santa Catalina, graduating in 1744. He was ordained a priest on September 19, 1750. About this time he wrote a biography of the Granadan poet José Antonio Porcel y Salablanca.

In 1753 he was named canon of the cathedral of Córdoba, where he remained until 1775. He was a cultured man and a lover of the arts. He collected paintings by Velázquez, Rubens, Titian, etc., and his library contained the most modern works on all branches of knowledge. He was also a numismatist.

He was named bishop of Mérida in Yucatán in 1775, in the Viceroyalty of New Spain (colonial México). Sailing to Cuba in the spring of 1776 for his consecration, he was accompanied by much of his family and friends, including his nephew Manuel Torres. [1] He brought with him 38 crates of books, rich ornaments, paintings, and coins. He reorganized the Colegio de San Pedro, which had fallen on hard times since the expulsion of the Jesuits in 1767.

In 1777 he was named archbishop of Santa Fé de Bogotá in the colonial Viceroyalty of New Granada by King Charles III, and confirmed by the pope. He arrived there on March 5, 1778. There he worked assiduously and successfully to pacify the rebels of the Comunero Revolt. For his services, King Charles subsequently made him a member of the Order of Carlos III and viceroy of New Granada.

He did much important pastoral work. He reformed the system of tithes and founded the sees of Mérida (Venezuela) and Cuenca (Quito). He was unsuccessful in founding a see at Antioquia and in placing the diocese of Panama under the jurisdiction of Bogotá (instead of Lima). Neither was he able to organize a provincial council of New Granada, as he had hoped.

Revolt of the Comuneros

In 1780 the Revolt of the Comuneros broke out in the Viceroyalty of New Granada, almost at the same time as the revolt of Túpac Amaru in Viceroyalty of Perú. This was largely a reaction against the new system of taxes ordered by Charles III. To institute these reforms, the Crown sent Juan Francisco Gutiérrez de Piñeres to the colony in 1777, with the title of visitador (inspector). He established a tobacco monopoly, prohibiting its cultivation in certain regions, such as Socorro and Chiriquí Province. He set taxes on playing cards and aguardiente, organized the tax office, and set up customs offices in Cartagena and Bogotá.

The revolt began in Simacota, and included Mestizos, Criollos and Indigenous. About 20,000 men marched on the capital to demand the repeal of the new taxes, defeating colonial troops along the way. Viceroy Manuel Antonio Flórez had left the capital for Cartagena to defend against an expected attack there by the British. Visitador Gutiérrez de Piñeres was forced to flee before the Comuneros. The Audiencia and the archbishop formed a delegation to meet with the rebels. The meeting was held at Zipaquirá, only 60 km from the capital.

The rebels demanded the elimination of the new taxes and reductions in the old ones. Archbishop Caballero convinced the members of the Audiencia to accept all the terms. An agreement was reached on June 7, 1781, and the archbishop swore on the gospels to uphold it. The rebels dispersed. Nevertheless, once back in Bogotá the Audiencia and the archbishop repudiated the agreement. The Comuneros rose again, but with less success. They were violently suppressed, and their leaders captured and executed.

Viceroy Manuel Antonio Flórez resigned on November 26, 1781 and was replaced by Juan de Torrezar Díaz Pimienta, governor of Cartagena. However Torrezar died on June 11, 1782, only four days after arriving in the capital. A sealed letter opened after his death directed that the new interim Viceroy of New Granada should be Archbishop Caballero y Góngora.

It thus fell to Caballero to pacify the viceroyalty. He promulgated a pardon granted by the king, expanded and improved the colonial army, and sent Franciscan missionaries to the affected provinces to preach peace and obedience to the king. He also requested the Crown to abolish the recent reforms, including the creation of intendencias in the colony. New Granada become the only Spanish territory in the Americas where they were not established.

His efforts to modernize the viceroyalty were of great importance. He stimulated the economy, industry and the arts, and greatly assisted the Royal Botanical Expedition of 1783, under José Celestino Mutis. In 1782 and 1783 he had to deal with an epidemic of smallpox. In 1783 the interim character of his appointment was removed, and he became viceroy in his own right. In October 1784 he went to Cartagena to settle the Indian population in towns, and to suppress an Indigenous rebellion in Darién and promote colonization there. The latter project was not successful. He founded new missions in Casanare and San Martín.

In 1787 he asked to be relieved of his positions, and the king granted his request the following year.

In 1788 he was appointed bishop of Córdoba. He sailed for Spain in April 1789. In Córdoba, he founded the School of Fine Arts and donated his art collection to the city.

The genus Gongora , a type of orchid with most species found in Colombia, was named after him.

The Viceroyalty of New Granada was the name given on 27 May 1717, to the jurisdiction of the Spanish Empire in northern South America, corresponding to modern Colombia, Ecuador, and Venezuela. The territory corresponding to Panama was incorporated later in 1739, and the provinces of Venezuela were separated from the Viceroyalty and assigned to the Captaincy General of Venezuela in 1777. In addition to these core areas, the territory of the Viceroyalty of New Granada included Guyana, southwestern Suriname, parts of northwestern Brazil, and northern Peru.

The Revolt of the Comuneros was a popular uprising in the Viceroyalty of New Granada against the Spanish authorities from March through October 1781. The revolt was in reaction to the increase in taxation to raise funds for defense of the region against the British, a rise in the price of tobacco and brandy, which were part of the late eighteenth-century Bourbon reforms. The initial revolt was local and not well known outside the region of Socorro, but in the late nineteenth century, historian Manuel Briceño saw the massive revolt as a precursor to independence. Prior to the 1781 revolt, residents in New Granada had protested, at times violently, crown policy implementation there between 1740 and 1779.

Manuela Beltrán was a Neogranadine woman who organized a peasant revolt against excess taxation in 1780.

Manuel Antonio Flórez Maldonado Martínez Ángulo y Bodquín was a general in the Spanish navy and viceroy of New Granada and New Spain.

José Antonio de Areche Zornoza was a Spanish visitador in Peru (1777–82). He was responsible for the execution of Inca rebel Túpac Amaru II, his family and coconspirators.

Manuel Antonio Arredondo y Pelegrín was a Spanish judge, soldier and colonial administrator in Peru and Ecuador. Briefly in 1801 he was interim viceroy of Peru.

Antonio de la Pedrosa y Guerrero was an attorney in Spain and in Santa Fe de Bogotá, a member of the Council of the Indies, and the first (provisional) viceroy of New Granada, from June 13, 1718 to November 25, 1719. 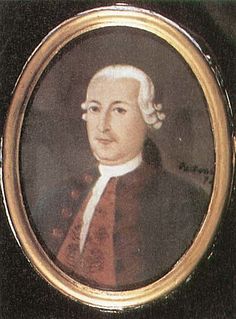 Juan de Torrezar Díaz Pimienta was a Spanish military officer and colonial official. He was twice governor of Cartagena de Indias, after which he was promoted to viceroy of New Granada.

Pedro Mendinueta y Múzquiz was a Spanish lieutenant general and colonial official. From January 2, 1797 to 1803 he was viceroy of New Granada. He was a knight of the Order of Santiago, and he was awarded the Gran Cruz of Carlos III.

Antonio José Amar y Borbón Arguedas was a Spanish military officer and colonial official. From September 16, 1803 to July 20, 1810 he was viceroy of New Granada. During his mandate he faced the beginning of the independence movement. He is also remembered for introducing costumes and masked balls in the society of Bogotá.

José Miguel Pey y García de Andrade was a Colombian statesman and soldier and a leader of the independence movement from Spain. He is considered the first vice president and first president of Colombia. He was a centralist.

Antonio Villavicencio y Verástegui was a statesman and soldier of New Granada, born in Quito, and educated in Spain. He served in the Battle of Trafalgar as an officer in the Spanish Navy with the rank of Second Lieutenant. He was sent as a representative of the Spanish Crown to New Granada, where his arrival was used as an excuse in Santafé de Bogotá to start a revolt; this was known as the Florero de Llorente, which culminated in the proclamation of independence from Spain. After this incident he resigned his office and joined the cause of independence. He was later captured and became the first martyr executed during the reign of terror of Pablo Morillo.

José Ignacio de Cavero y Cárdenas was a Mexican-Colombian lawyer and politician. A Precursor of the Independence of Colombia, as the 4th President of the Supreme Junta of Cartagena de Indias he was a signatory of the declaration of independence of the Cartagena Province from the Viceroyalty of the New Granada and the Kingdom of Spain, establishing a republic based in the concept of separation of powers, and abolishing the Tribunal of the Holy Office of the Inquisition. Cartagena would eventually join with other provinces to create the Republic of Colombia under President Simón Bolívar, and was appointed in 1824 by Vice President Francisco de Paula Santander y Omaña to serve as the 3rd Prefect Intendant of the Magdalena River and the Isthmus province, which now encompassed the former province of Cartagena as well as the provinces of Santa Marta, Riohacha, and the Isthmus.