Pietro Marc'Antonio Cesti (Italian pronunciation:  [anˈtɔːnjo ˈtʃesti] ) (baptism 5 August 1623 –14 October 1669), known today primarily as an Italian composer of the Baroque era, was also a singer (tenor), and organist. He was "the most celebrated Italian musician of his generation". [1]

He was born at Arezzo, and studied with various local musicians. In 1637 he joined the Order of Friars Minor, or Franciscans, a Roman Catholic religious group founded by Francis of Assisi. While he was in Volterra he turned more toward secular music, perhaps due to the patronage and influence of the powerful Medici family. Here he also came in contact with Salvator Rosa, who wrote libretti for a number of Cesti's cantatas. By 1650 Cesti's calling as a Franciscan friar and his success as a singer and composer for operas was coming into conflict, and he was officially reprimanded. In 1652 he became a member of the court at Innsbruck of Ferdinand Charles, Archduke of Austria.[ citation needed ] After holding a post somewhere in Florence as maestro di cappella, he entered the papal chapel in 1660. In 1666 he became Vice-Kapellmeister at Vienna, and died at Venice in 1669. [2]

Cesti is known principally as a composer of operas. The most celebrated of these were La Dori (Innsbruck, 1657), Il pomo d'oro (Vienna, 1668) [2] and Orontea (1656). Il pomo d'oro (The Golden Apple) was written for the wedding in Vienna of Emperor Leopold I in 1666, and first performed in 1668, in a famously lavish production. It was far more elaborate than contemporary Venetian operas, including a large orchestra, numerous choruses, and various mechanical devices used to stage things like gods descending from heaven ( deus ex machina ), naval battles, and storms.

Orontea was revived seventeen times in the next thirty years, making it one of the most frequently performed operas on the continent in the mid-17th century. Even Samuel Pepys owned a copy of the score. [3] It includes a well-known soprano aria "Intorno all'idol mio" (English: "Around my idol").

Cesti was also a composer of chamber cantatas, and his operas are notable for the pure and delicate style of their airs, more suited to the chamber than to the stage. [2] He wrote in the bel canto style of the 17th century, and his compositions were heavily influenced by his career as a professional singer. His musical writing owes much to the emerging tonality of the time.

Pietro Antonio Domenico Trapassi, better known by his pseudonym of Pietro Metastasio, was an Italian poet and librettist, considered the most important writer of opera seria libretti.

Antonio Alessandro Boncompagno Stradella was an Italian composer of the middle Baroque period. He enjoyed a dazzling career as a freelance composer, writing on commission, and collaborating with distinguished poets, producing over three hundred works in a variety of genres.

Giovanni Buonaventura Viviani was an Italian composer and violinist. He worked in the court at Innsbruck as a violinist at least between 1656 and 1660. Between 1672 and 1676 he was director of the court music at Innsbruck, which, after the extinction of the Tyrolean Habsburgs, had come under the control of the emperor. Although in publications of 1678 Viviani still described himself as holding this position, it seems more likely that he was in fact in Venice working on his arrangement of Francesco Cavalli’s Scipione affricano and his own opera Astiage, which were both performed in Venice that year. Also that year, Viviani directed an oratorio at the Oratorio di San Marcello in Rome with Arcangelo Corelli and Bernardo Pasquini. He was probably elevated to the nobility in the same year, since he subsequently designated himself ‘Nobile del Sacro Romano Imperio’. Between 1678 and 1679 and 1681 and 1682 he was in Naples as director of a troupe of opera singers, and while he was there he performed some of his own operas and oratorios. In 1686 he was maestro di cappella to the Prince of Bisignano. From January 1687 to December 1692 he was maestro di cappella of Pistoia Cathedral.

The year 1668 in music involved some significant events.

The year 1667 in music involved some significant events.

Attilio Malachia Ariosti was a Servite Friar and Italian composer in the Baroque style, born in Bologna. He produced more than 30 operas and oratorios, numerous cantatas and instrumental works.

Il pomo d'oro is an opera in a prologue and five acts by the Italian composer Antonio Cesti with a libretto by Francesco Sbarra (1611-1668). It was first performed before the imperial court in a specially constructed open-air theatre Vienna in 1668. The work was so long it had to be staged over the course of two days: the Prologue, Acts One and Two were given on July 12; Acts Three, Four and Five on July 14. Originally planned to mark the wedding of the Habsburg Holy Roman Emperor Leopold I and Margaret Theresa of Spain in 1666, the production was rescheduled to mark the Empress's 17th birthday in 1668. The staging was unprecedented for its magnificence. The designer Ludovico Ottavio Burnacini provided no fewer than 24 sets and there were plenty of opportunities for spectacular stage machinery, including shipwrecks and collapsing towers.

Orontea is an opera in a prologue and three acts by the Italian composer Antonio Cesti with a libretto by Giacinto Andrea Cicognini. The first performance took place in Innsbruck on 19 February 1656. Orontea was one of the most popular Italian operas of the 17th century. It includes well-known soprano arias such as "Intorno all'idol mio", "Addio Corindo" and "Il mio ben dice ch'io speri".

Giovanni Felice Sances was an Italian singer and a Baroque composer. He was renowned in Europe during his time. 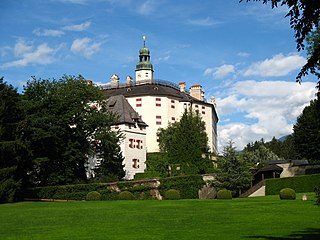 The Innsbruck Festival of Early Music is a festival of historically informed performances of music from the late Renaissance, Baroque and early Classical periods which takes place annually in Innsbruck, Austria. It was founded in 1976.

L'Argia is an opera in a prologue and three acts composed by Antonio Cesti to a libretto by Giovanni Filippo Apolloni. It was first performed in the court theatre at Innsbruck on 4 November 1655 to celebrate the visit of Queen Christina of Sweden who was on her way to exile in Rome. Over the next 20 years it had multiple performances in Italian cities including Venice and Siena where it inaugurated Siena's new opera house in 1669. Its first performance in modern times took place at the Innsbruck Festival of Early Music in 1996. Set on the Island of Cyprus in ancient times the opera's convoluted plot, full of disguises and mistaken identities, revolves around the amorous misadventures of Selino who has been pursued to Salamis by his deserted wife Princess Argia.

La Dori, overo Lo schiavo reggio is a tragi-comic opera in a prologue and three acts composed by Antonio Cesti to a libretto by Giovanni Filippo Apolloni. It was first performed in the court theatre at Innsbruck in 1657. The story is set in Babylon on the shores of the Euphrates and is a convoluted tale of mistaken identities—a female protagonist who disguised as a man eventually regains her lost lover, and a man disguised as a woman who causes another man to fall in love with him. In several respects it resembles the plot of Cesti and Apolloni's earlier opera L'Argia and foreshadows Apostolo Zeno's libretto for Gli inganni felici (1695) and Metastasio's libretto for L'Olimpiade (1733). The first Italian staging of La Dori was in Florence in 1661 for the wedding of Cosimo III de' Medici, Grand Duke of Tuscany. It subsequently became one of the most popular operas in 17th-century Italy. The opera was revived three times in the 20th century, beginning in 1983. 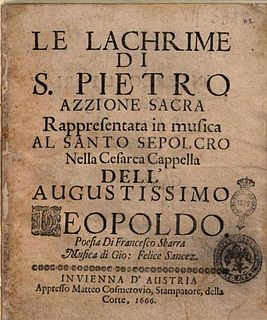 Francesco Sbarra was an Italian poet and librettist. Born in Lucca, he spent most of his career in Austria where he wrote the librettos for entertainments and operas at the courts of Archduke Ferdinand Charles in Innsbruck and Emperor Leopold I in Vienna.