De Almeida was born in Neully-sur-Seine. As a child he studied piano, showing great musical talent (although he admitted he was not an exceptional pianist). In the early 1940s, he taught himself to play the clarinet by listening to recordings of Benny Goodman and Artie Shaw. When his family moved to Buenos Aires he studied with Alberto Ginastera, and he had the opportunity to hear performances conducted by notable European refugees at the Teatro Colón. [1] He studied nuclear chemistry at the Massachusetts Institute of Technology. Leading a student orchestra there, he realized he was more interested in music than in science. His godfather, pianist Artur Rubinstein, convinced him to give up his full scholarship at M.I.T. He attended Yale University, where he studied musical theory with Paul Hindemith. He received his Bachelor of Music degree at Yale in 1949. He took conducting courses with Sergei Koussevitzky and Leonard Bernstein at the Tanglewood Music Center, and also studied conducting with George Szell. During his student days, he played first horn at Tufts College, first bassoon at Harvard, oboe with the Wellesley Orchestra, clarinet at MIT and the cello at Yale. [1]

He began conducting for Portuguese Radio in Lisbon in 1949, and soon after was appointed to his first conducting post at the Oporto Symphony Orchestra. While there, he invited Thomas Beecham to guest conduct the orchestra. He was the conductor of the Portuguese Radio in Lisbon (1957–1960) and Stuttgart Philharmonic (1962–1964). He gave the Paris premiere of Il Trittico at the Opéra-Comique in 1964, [1] and worked at the Opéra National de Paris from 1965 to 1967. He was principal guest conductor of the Houston Symphony (1969–1971) and then music director of the Orchestre philharmonique de Nice (1971–1978). He gave the Argentinian premiere of Mahler's 7th Symphony in Buenos Aires. [1] He became the music director of the Moscow Symphony Orchestra in 1993, a position he held at his death.

His American debut came in November 1960 with the opening of the eighth subscription season of New York's American Opera Society at The Town Hall. He led the Symphony of the Air in a concert version of Christoph Willibald Gluck's Orfeo ed Euridice. New York Times reviewer Harold C. Schonberg wrote of the conductor "He knows his business. Cool, not flamboyant of gesture, capable, he held the performance together as nicely as one would desire". He also wrote that "Mr. de Almeida is a conductor to watch".

He made numerous recordings, specializing in French operas such as Ambroise Thomas' Mignon and Hamlet, and Fromental Halévy's La Juive . His recordings were instrumental in restoring compositions of Ernest Chausson, Henri Duparc, Florent Schmitt and Jules Massenet to the active repertory. He recorded ballet music from the operas of Gaetano Donizetti, Gioachino Rossini, and Giuseppe Verdi. With the Moscow Symphony he recorded orchestral works of, among others, Charles Tournemire, Henri Sauguet, and Gian Francesco Malipiero. He recorded for many labels, including Columbia, EMI, Erato, Naxos, Philips, RCA and Supraphon.

An interest in the works of Jacques Offenbach began in the 1950s, and by the 1970s Almeida was known as an authority. He made numerous discoveries including previously unknown arias and a second-act finale for La Grande-Duchesse de Gérolstein . He prepared editions of Offenbach's operas, and compiled a Thematic Catalogue of the Works of Jacques Offenbach.

He became co-artistic director (with H.C. Robbins Landon) of the Haydn Foundation in 1968. Under the Foundation's auspices, he recorded a set of Joseph Haydn's symphonies. He also edited a complete set of Luigi Boccherini's symphonies for Doblinger in Vienna.

He was married to Lynn Erdman in 1953, their marriage ending in divorce in 1988. The couple had two sons (Antonio de Almeida Santos and Lawrence d'Almeida) and a daughter (Cecilia de Almeida Frachesen). His son Antonio, a Juilliard and Academy of Vocal Arts trained opera singer, worked as classical record producer and served as a producer and engineer for some of the conductor's Moscow Symphony recordings.

Despite his Portuguese/American parentage, he declared his nationality to be French, and he remained a citizen of France throughout his life. He spoke six languages fluently, and was well versed in Greek and Latin.

He died of liver and lung cancer on 18 February 1997, age 69, at the University of Pittsburgh Medical Center. 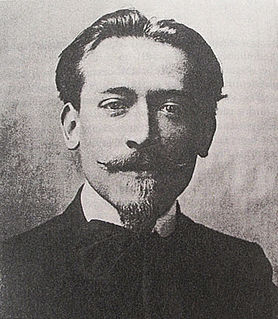 Marie-Joseph Canteloube de Malaret was a French composer, musicologist, and author best known for his collections of orchestrated folksongs from the Auvergne region, Chants d'Auvergne. 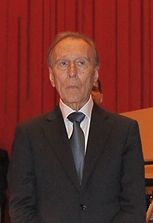 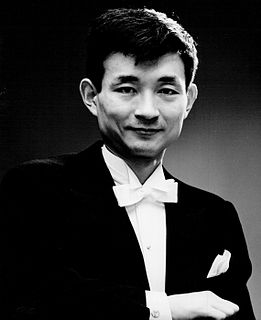 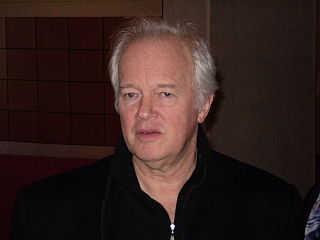 Raymond John Leppard was a British-American conductor, harpsichordist, composer and editor. In the 1960s, he played a prime role in the rebirth of interest in Baroque music; in particular, he was one of the first major conductors to perform Baroque opera, reviving works by Claudio Monteverdi and Francesco Cavalli. He conducted operas at major international opera houses and festivals, including the Glyndebourne Festival where he led the world premiere of Nicholas Maw's The Rising of the Moon, the Metropolitan Opera and the Royal Opera House. He composed film scores such as Lord of the Flies and Alfred the Great.

The Grammy Award for Best Classical Vocal Solo has been awarded since 1959. There have been several minor changes to the name of the award over this time:

Frederica "Flicka" von Stade Gorman is a semi-retired American opera singer. Since her debut in New York in 1970, she has performed in operas, musicals, concerts and recitals in venues throughout the world, including the Met, La Scala, the Paris Opera, the Vienna State Opera, the Salzburger Festspielhaus, Covent Garden, Glyndebourne and Carnegie Hall. Conductors with whom she has worked include Abbado, Bernstein, Boulez, Giulini, Karajan, Ozawa, Solti and Tilson Thomas. She has also been a prolific and eclectic recording artist, and has made many appearances on television.

Sir John Michael Pritchard, CBE, born Stanley Frederick Pritchard, was an English conductor. He was known for his interpretations of Mozart operas and for his support of contemporary music. 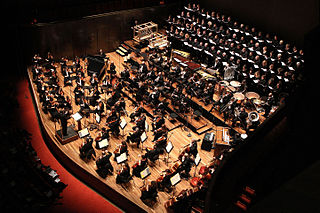 Jaime Laredo is a violinist and conductor. Currently the conductor and Music Director of the Vermont Symphony Orchestra, he began his musical career when he was five years old. In 1948 he came to North America and took lessons from Antonio de Grassi. He also studied with Frank Houser before moving to Cleveland, Ohio, to study under Josef Gingold in 1953. He studied with Ivan Galamian at the Curtis Institute of Music until his graduation. From 1960 to 1974 he was married to the pianist Ruth Laredo. Laredo is currently a professor at the renowned Indiana University Jacobs School of Music. He served as artistic advisor for the Fort Wayne Philharmonic Orchestra and guest conducted the orchestra on April 18, 2009, in a program featuring his wife, the cellist Sharon Robinson. He was scheduled to again conduct the orchestra for two programs during the 2009–10 season. Laredo and Robinson were also featured soloists in a special concert conducted by Andrew Constantine, who became the Philharmonic's music director in July 2009.

Judith Blegen is an American soprano, particularly associated with light lyric roles of the French, Italian and German repertories.

Chants d'Auvergne is a collection of folk songs from the Auvergne region of France arranged for soprano voice and orchestra or piano by Joseph Canteloube between 1923 and 1930. The songs are in the local language, Occitan. The best known of the songs is the "Baïlèro", which has been frequently recorded and performed in slight variations of Canteloube's arrangement, such as for choir or instrumental instead of the original soprano solo.

Leonid Grin is an American conductor. 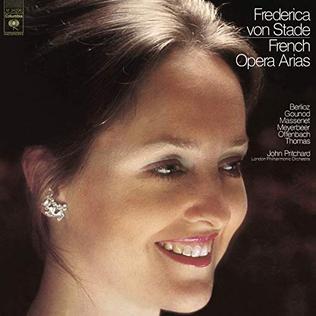 French Opera Arias is a 51-minute studio album of music performed by Frederica von Stade and the London Philharmonic Orchestra under the direction of John Pritchard. It was released in 1976. 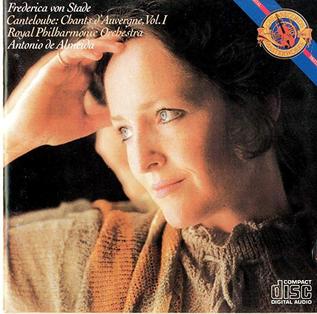 Frederica von Stade: Chants d'Auvergne, Vol. 1 is a 51-minute studio album presenting seventeen of the thirty traditional Auvergnat songs collected and arranged by Joseph Canteloube, performed by von Stade and the Royal Philharmonic Orchestra under the direction of Antonio de Almeida. It was released in 1982.. The same artists recorded the rest of Canteloube's Auvergne songs and three mélodies of his own composition for a sequel album, Frederica von Stade: Chants d'Auvergne, Vol. 2, released in 1986. 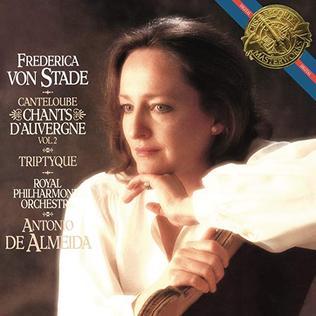 Frederica von Stade: Chants d'Auvergne, Vol. 2 & Triptyque is a 60-minute studio album containing thirteen of the thirty traditional Auvergnat songs collected and arranged by Joseph Canteloube, together with a song cycle of his own composition, performed by von Stade and the Royal Philharmonic Orchestra under the direction of Antonio de Almeida. It was released in 1986. The same artists recorded Canteloube's seventeen other Auvergnat songs for the album's predecessor, Frederica von Stade: Chants d'Auvergne, Vol. 1, released in 1982. 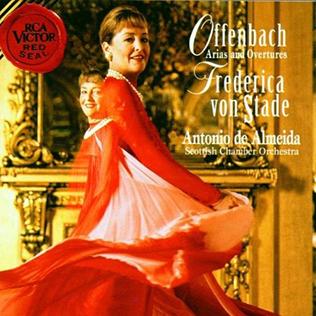 Mignon is a 194-minute studio album of Ambroise Thomas's opera, performed by André Battedou, Marilyn Horne, Paul Hudson, Claude Méloni, Frederica von Stade, Alain Vanzo, Ruth Welting and Nicola Zaccaria with the Ambrosian Opera Chorus and the Philharmonia Orchestra under the direction of Antonio de Almeida. It was released in 1978.