The Stadhuis (City Hall) of Antwerp, Belgium, stands on the western side of Antwerp's Grote Markt (Great Market Square). Erected between 1561 and 1565 after designs made by Cornelis Floris de Vriendt and several other architects and artists, this Renaissance building incorporates both Flemish and Italian influences. The Stadhuis is listed as one of the Belfries of Belgium and France, a UNESCO World Heritage Site. [1]

In the 16th century Antwerp became one of the busiest trading ports and most prosperous cities in Northern Europe. The municipal authorities wished to replace Antwerp's small medieval town hall with a more imposing structure befitting the prosperity of the great port city. Antwerp architect Domien de Waghemakere drafted a plan (c. 1540) for a new building in a style typical of the monumental Gothic town halls of Flanders and Brabant.

But the threat of war prevented any progress on the project. The building materials intended for the Stadhuis were instead used to shore up the city defenses. Not until about 1560 new plans were developed. In the meantime Gothic architecture had gone out of fashion. The new designs for the Stadhuis were in the new Renaissance style. Completed in 1565, the building lasted hardly a decade before being burnt to a shell in the Spanish Fury of 1576. It was restored three years later.

The low arcaded ground story is of rusticated stone, and at one time housed little shops. Above are two stories with Doric and Ionic columns separating large mullioned windows, and a fourth story forming an open gallery.

The richly ornamented central section, which rises above the eaves in diminishing stages, holds female statues representing Justice, Prudence, and the Virgin Mary, and bears the coats of arms of the Duchy of Brabant, the Spanish Habsburgs, and the Margraviate of Antwerp.

Renovations during the late 19th century by architects Pierre Bruno Bourla, Joseph Schadde and Pieter Jan August Dens drastically modified the interior. Much of the stately decoration dates from this period, as does a roof over what was once an open-air inner courtyard. A number of the leading Antwerp historical painters were invited to assist with the decorations. Henri Leys painted a series of murals depicting key events in Antwerp's history and portraits of former Belgian rulers for the Leys Hall. [2] [3]

The Antwerp Stadhuis became an exemplar for the new renaissance style in architecture in the Netherlands and Northern Europe. The Stadhuis of Vlissingen and of The Hague in the Netherlands and the design of the Rathaus of Emden and the portico of the Cologne Rathaus (1557) in Germany and the Green Gate (designed by Regnier or Reiner of Amsterdam) in Gdańsk, Poland were inspired by this new style. [4] [5]

Renaissance architecture is the European architecture of the period between the early 14th and early 16th centuries in different regions, demonstrating a conscious revival and development of certain elements of ancient Greek and Roman thought and material culture. Stylistically, Renaissance architecture followed Gothic architecture and was succeeded by Baroque architecture. Developed first in Florence, with Filippo Brunelleschi as one of its innovators, the Renaissance style quickly spread to other Italian cities. The style was carried to Spain, France, Germany, England, Russia and other parts of Europe at different dates and with varying degrees of impact. 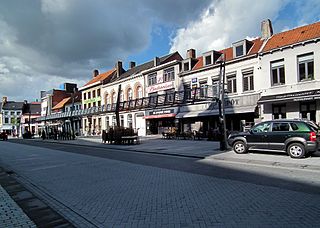 Turnhout is a Belgian municipality located in the Flemish province of Antwerp. The municipality comprises only the city of Turnhout proper. On January 1, 2015, Turnhout had a total population of 42,637. The total area is 56.06 km2 (21.64 sq mi) which gives a population density of 835.5/km2 (2,164/sq mi). The agglomeration, however, is much larger, accounting up to 81,473 inhabitants. Turnhout is known for its playing card industry, as it houses the head office of the world's largest manufacturer of playing cards, Cartamundi. Turnhout is also the capital of the administrative district with the same name. The Turnhout city council often promotes the city as "the capital of the Kempen area". This designation is entirely unofficial, since the Kempen area is far larger than the Turnhout district and does not form an administrative unit. 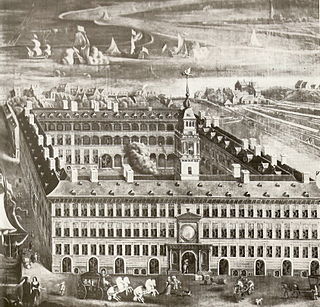 Hans Hendrik van Paesschen was a Flemish architect, based in Antwerp, who designed high-style classical buildings in many countries of northern Europe. 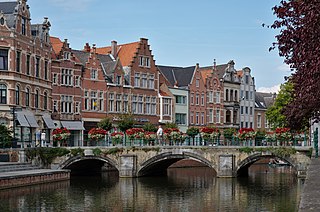 Lier is a municipality located in the Belgian province of Antwerp. It is composed of the city of Lier proper and the village of Koningshooikt. The city center is surrounded by the river Nete, which also cuts through it. In 2018, Lier had a total population of 35,712. The total area is 49.70 km2 making a population density (PD) of 720 per km2. Lier is known for its beers, its patron saint St. Gummarus and Lierse vlaaikes cake. It is also home to the world headquarters of Van Hool, a global bus and coach manufacturer. Lier's two principal football clubs are K. Lyra-Lierse and Lierse Kempenzonen.

Elizabethan architecture refers to buildings of a certain style constructed during the reign of Queen Elizabeth I of England and Ireland from 1558–1603. Historically, the era sits between the long era of dominant architectural style of religious buildings by the Catholic Church, which ended abruptly at the Dissolution of the Monasteries from c.1536, and the advent of a court culture of pan-European artistic ambition under James I (1603–25). Stylistically, Elizabethan architecture is notably pluralistic. It came at the end of insular traditions in design and construction called the Perpendicular style in church building, the fenestration, vaulting techniques and open truss designs of which often affected the detail of larger domestic buildings. However, English design had become open to the influence of early printed architectural texts imported to England by members of the church as early as the 1480s. Into the 16th century, illustrated continental pattern-books introduced a wide range of architectural exemplars, fueled by the archaeology of classical Rome which inspired myriad printed designs of increasing elaboration and abstraction.

Hendrick de Keyser was a Dutch sculptor, merchant in Belgium bluestone, and architect who was instrumental in establishing a late Renaissance form of Mannerism changing into Baroque. Most of his works appeared in Amsterdam, some elsewhere in the Dutch Republic. He was the father of Pieter and Thomas de Keyser and Willem, and the uncle of Huybert de Keyser, who became his apprentices and all involved in building, decoration and architecture. 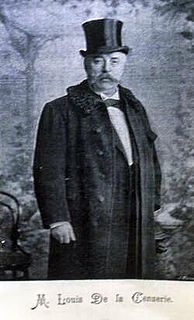 Louis Delacenserie (1838–1909) was a Belgian architect from Bruges. The spelling of his name differs greatly; De la Censerie, Delasencerie, Dela Censerie or Dela Sencerie are the most common alternative forms. His father was a merchant and building contractor from Tournai.

Keldermans is a family of Flemish artists, originating from the city of Mechelen in the Duchy of Brabant. The members of the family were mostly architects working in the Brabantine Gothic style. As the most important architects of their time in the Netherlands, they defined the Brabantine Gothic style, and their works can still be seen today in cities like Mechelen, Brussels, Antwerp, Ghent, Lier, Middelburg and Gouda. Anthonis II and Rombout II were court architects for Charles V. Laurens II, last in the line, was influenced by Renaissance architecture and marked the end of the Gothic period in this region.

Cornelis Floris or Cornelis (II) Floris De Vriendt was a Flemish sculptor, print artist and architect. He developed a new style, which was informed by Flemish traditions, the 16th century Italian renaissance and possibly the School of Fontainebleau. His innovations spread throughout Northern Europe where they had a major influence on the development of sculpture and architecture in the 16th and early 17th centuries.

The Town Hall of Leuven, Belgium, is a landmark building on that city's Grote Markt square, across from the monumental St. Peter's Church. Built in a Brabantine Late Gothic style between 1448 and 1469, it is famous for its ornate architecture, crafted in lace-like detail. 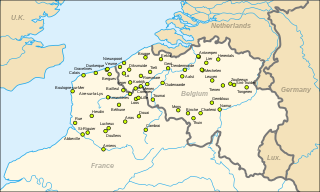 The Belfries of Belgium and France are a group of 56 historical buildings designated by UNESCO as World Heritage Site, in recognition of the civic belfry serving as an architectural manifestation of emerging civic independence from feudal and religious influences in the former County of Flanders and neighboring areas which once were possessions of the House of Burgundy.

The Saint Leonard's Church in Zoutleeuw, Belgium, stands on the former site of a Romanesque chapel erected in 1125 by Benedictines from Vlierbeek Abbey near Leuven. Construction of the present church began around 1231, and additions continued into the 16th century. Rendered mainly in the Gothic style, the building in its oldest parts shows traces of the Romanesque architectural style.

The 91-metre-tall Belfry of Ghent is one of three medieval towers that overlook the old city centre of Ghent, Belgium, the other two belonging to Saint Bavo Cathedral and Saint Nicholas' Church. Its height makes it the tallest belfry in Belgium. The belfry of Ghent, together with its attached buildings, belongs to the set of Belfries of Belgium and France, a UNESCO World Heritage Site.

The Town Hall of the City of Brussels is a Gothic building from the Middle Ages. It is located on the famous Grand Place in Brussels, Belgium, opposite the Brussels City Museum. It is the only remaining medieval building of the Grand Place and is considered a masterpiece of civil Gothic architecture and more particularly of Brabantine Gothic. 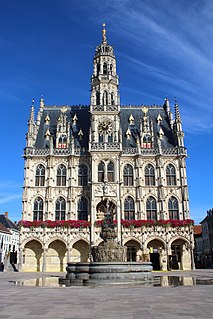 The Town Hall of Oudenaarde, Belgium was built by architect Hendrik van Pede in 1526–1537 to replace the medieval Schepenhuis that occupied the same site. Another older structure, the 14th-century Cloth Hall, was retained and now forms a sort of extension at the back of the Town Hall proper. 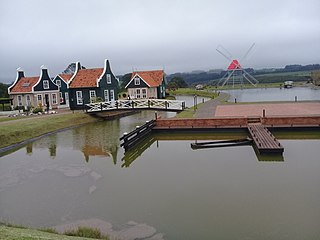 Dutch architecture has played an important role in the international discourse on architecture in three eras. The first of these was during the 17th century, when the Dutch empire was at the height of its power. The second was in the first half of the 20th century, during development of modernism. The third is not concluded and involves many contemporary Dutch architects who are achieving global prestige. 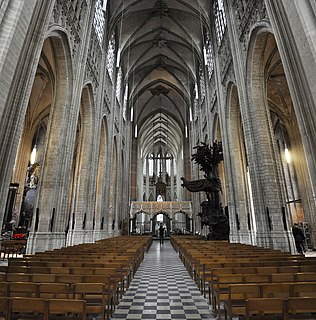 Saint Peter's Church in Leuven, Belgium, is a Roman Catholic church built in the 15th century in the Brabantine Gothic style. The church has a cruciform floor plan and a low bell tower that has never been completed. It is 93 metres (305 ft) long. It is located on the city's 'Grote Markt', opposite the Town Hall.

Brabantine Gothic, occasionally called Brabantian Gothic, is a significant variant of Gothic architecture that is typical for the Low Countries. It surfaced in the first half of the 14th century at St. Rumbold's Cathedral in the City of Mechelen. 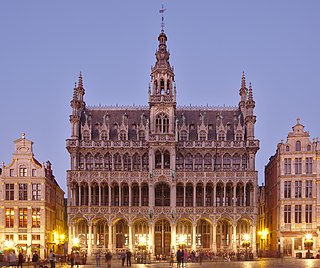 The Brussels City Museum is a museum on the Grand Place of Brussels, Belgium. It is dedicated to the history and folklore of the City of Brussels from its foundation to modern times, which it presents through paintings, sculptures, tapestries, engravings, photos and models, including a notable scale-representation of the town during the Middle Ages. 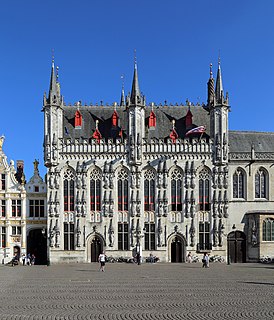 The Bruges City Hall is one of the oldest city halls in the entire Netherlands region. It is located in Burg square, the area of the former fortified castle in the centre of Bruges, Belgium.