Anyanya was founded in 1963, [5] [2] as the Moru, Nuer, Lotuko, Madi, Bari, Acholi, Zande, Dinka, and other people from the entire southern region of Sudan waged a war against the Sudanese government. This mobilization came to be known as the Anyanya rebellion or the First Sudanese Civil War. It ended when the Anyanya signed the Addis Ababa Agreement with the Government in 1972.

The Anyanya movement, although relatively strong, was weakened by the internal political wrangling amongst the leading politicians of the liberation movement. In 1969, Aggrey Jaden left the Anyanya movement due to his frustration with the lack of cohesiveness and bickering within the movement. Shortly after Gordon Muortat Mayen was elected unanimously as Southern Sudan's new president of the movement, the former SSPG was renamed the Nile Provisional Government (NPG). Under Muortat, the movement was able to carry on waging war against the North. However, Muortat's chief of staff Joseph Lagu was able through his assistant Oliver Batali Albino to negotiate with Israel, to divert the arms they were supplying the movement with, to himself, instead of the president Gordon Muortat. [6] Following this, Lagu openly formed a coup against Muortat, and made every battalion pledge allegiance to him instead of Muortat if they wanted arms. The coup was able to successfully unite the army under Lagu and the transition of power was peaceful, Lagu assumed leadership of the movement both politically and militarily, and carried on the warfare against the north, the movement was renamed the South Sudan Liberation Movement. In 1972, Joseph Lagu signed a peace agreement with the north, ending the 17 year civil war. The peace agreement was initially rejected by leading members of the military such as Emmanuel Abuur and John Garang. However a letter circulated to all Anyanya forces which detailed the plan of the rebellion against the peace agreement was intercepted.

Even before the civil war's formal end, many Anyanya had crossed the border to Uganda, [7] where their ally Idi Amin [8] controlled the military. Despite opposition by the Ugandan President Milton Obote, Amin had recruited these fighters into the Uganda Army. [9] After Amin had overthrown Obote and assumed the Ugandan presidency in 1971, he recruited even more ex-Anyanya into the Uganda Army, as he regarded them as loyal to his government. Most of the Sudanese ex-insurgents actually acted as mercenaries. [7] Ali Towelli [10] and Godwin Sule were notable former Anyanya in the Ugandan military. [11] [lower-alpha 1] As result of their association with Amin's unpopular regime, "Anyanya" eventually became a derogatory term in Uganda and was used as negative catch-all word for northern Ugandans as well as foreigners. [12]

In 1975, many discontented former Anyanya who had stayed in Suda, took up arms in eastern Upper Nile and Equatoria. They were labeled Anyanya II. When the Addis Ababa Agreement fell apart in 1983, marking the beginning of the Second Sudanese Civil War, the Sudan People's Liberation Movement/Army (SPLM/A) was founded. Competition between Anyanya II and the SPLM/A led to the eventual defeat of Anyanya II. Some of its members were incorporated into the ranks of the SPLM/A, and others were consolidated into a militia supported by the government of Sudan. [4] [13] 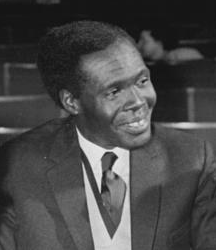 Apollo Milton Obote was a Ugandan political leader who led Uganda to independence in 1962 from British colonial administration. Following the nation's independence, he served as Prime Minister of Uganda from 1962 to 1966 and President of Uganda from 1966 to 1971, then again from 1980 to 1985. He was overthrown by Idi Amin in 1971, but was re-elected in 1980 a year after Amin's 1979 overthrow. His second period of rule ended after a long and bloody conflict known as the Ugandan Bush War.

The Second Republic of Uganda existed from 1971 to 1979, when Uganda was ruled by Idi Amin's military dictatorship. 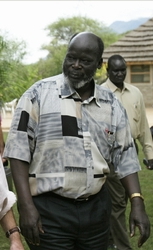 John Garang de Mabior was a Sudanese politician and revolutionary leader. From 1983 to 2005, he led the Sudan People's Liberation Army during the Second Sudanese Civil War, and following a peace agreement he briefly served as First Vice President of Sudan for 3 weeks until his death in a helicopter crash on 30 July 2005. A developmental economist by profession, Garang was a major influence on the movement that led to the foundation of South Sudan. 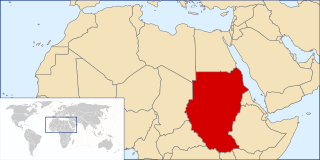 The First Sudanese Civil War was a conflict from 1955 to 1972 between the northern part of Sudan and the southern Sudan region that demanded representation and more regional autonomy. Half a million people died over the 17 years and the war was divided into four major stages: initial guerrilla warfare, the creation of the Anyanya insurgency, political strife within the government and establishment of the South Sudan Liberation Movement.

Joseph Lagu is a South Sudanese military figure and politician. He belongs to the Madi ethnic group of Eastern Equatoria State, South Sudan.

On May 25, 1969, several young officers calling themselves the Free Officers Movement seized power in Sudan and started the Nimeiri era in the history of Sudan. At the conspiracy's core were nine officers led by Colonel Jaafar an Nimeiri, who had been implicated in plots against the Abboud regime. Nimeiri's coup preempted plots by other groups, most of which involved army factions supported by the Sudanese Communist Party (SCP), Arab nationalists, or conservative religious groups. He justified the coup on the grounds that civilian politicians had paralyzed the decision-making process, had failed to deal with the country's economic and regional problems, and had left Sudan without a permanent constitution.

The Ugandan Bush War, also known as the Luwero War, the Ugandan Civil War or the Resistance War, was a civil war fought in Uganda by the official Ugandan government and its armed wing, the Uganda National Liberation Army (UNLA), against a number of rebel groups, most importantly the National Resistance Army (NRA), from 1980 to 1986.

The 1971 Ugandan coup d'état was a military coup d'état executed by the Ugandan military, led by general Idi Amin, against the government of President Milton Obote on January 25, 1971. The seizure of power took place while Obote was abroad attending the Commonwealth Heads of Government Meeting in Singapore. Amin was afraid that Obote might dismiss him, and installed himself as dictator.

Kikosi Maalum, also known as the Special Battalion or the grand coalition, was a militia of Ugandan exiles formed in Tanzania to fight against the regime of Idi Amin. The unit was founded by and loyal to former Ugandan President Milton Obote, and served as his de facto private army. It was commanded by former army officers David Oyite-Ojok and Tito Okello. Kikosi Maalum took part in the Uganda–Tanzania War, fighting alongside the Tanzanian military against Amin's forces. In course of this conflict, the militia was nominally unified with other Ugandan rebel groups, forming the Uganda National Liberation Army (UNLA) in 1979. After the fall of Amin's regime and Obote's return to power, Kikosi Maalum became the core of Uganda's new national army.

The military history of Uganda begins with actions before the conquest of the country by the British Empire. After the British conquered the country, there were various actions, including in 1887, and independence was granted in 1962. After independence, Uganda was plagued with a series of conflicts, most rooted in the problems caused by colonialism. Like many African nations, Uganda endured a series of civil wars and coup d'états. Since the 2000s in particular, the Uganda People's Defence Force has been active in peacekeeping operations for the African Union and the United Nations.

Anyanya II is the name taken in 1978 by a group of the 64 tribes of South Sudan dissidents who took up arms in All of Sudan. The name implies continuity with the Anyanya, or Anya-Nya, movement of the First Sudanese Civil War (1955-1972). 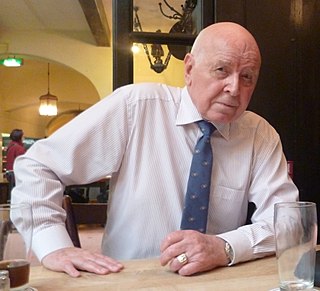 Rolf Steiner is a retired professional German mercenary. He began his military career as a French Foreign Legion paratrooper and saw combat in Vietnam, Egypt, and Algeria. Steiner rose to the rank of lieutenant colonel commanding the 4th Commando Brigade in the Biafran Army during the Nigerian Civil War, and later fought with the Anyanya rebels in southern Sudan.

Joseph Oduho Haworu was a leading politician from South Sudan who was active in the struggle for independence and a founding member of the Sudan People's Liberation Movement (SPLM). He was part of South Sudan liberation

Gordon Muortat Mayen Maborjok (1922–2008) was a South Sudanese veteran politician and an advocate for the rights and freedom of the South Sudanese people. He was the President of the Nile Provisional Government (NPG) which led Anyanya I; Southern Sudan's first armed resistance to Khartoum which started in 1955. Muortat also served as Vice-President of the Southern Front (SF) and Foreign Minister in the Southern Sudan Provisional Government (SSPG).

The Sudan People's Liberation Movement-in-Opposition, also known as the anti-governmental forces (AGF), is a mainly South Sudanese political party and rebel group that split from the Sudan People's Liberation Movement in 2013, due to political tensions between President Salva Kiir and Vice President Riek Machar over leadership of the SPLM. Tensions grew between forces loyal to Kiir and Machar and South Sudan plunged into the South Sudanese Civil War.

The Uganda Army, also known as Uganda Armed Forces, served as the national armed forces of Uganda during the dictatorship of Idi Amin (1971–1979). It mostly collapsed during the Uganda–Tanzania War, but remnants continued to operate in exile from 1979. These pro-Amin rebel forces continued to be called the "Uganda Army" and maintained a semblance of cohesion until 1980, when they fully fractured into rival factions.

The Uganda Army served as the national armed forces of Uganda during the presidencies of Mutesa II and Milton Obote. As time went on, the military was gradually expanded and increasingly interfered in Uganda's national politics. It played a prominent role in defeating local insurgencies, suppressing opposition to Obote, and intervened in conflicts in the Congo as well as Sudan. Dissatisfied soldiers overthrew Obote in 1971, resulting in the establishment of the Second Republic of Uganda under the dictatorship of army commander Idi Amin. The Uganda Army was purged, with thousands of suspected pro-Obote troops killed or fleeing the country. The military was consequently split into an army serving under Amin – the Uganda Army (1971–1980) – and exiled rebel factions. The latter helped to overthrow Amin's regime during the Uganda–Tanzania War of 1978–79, and became the core of the Uganda National Liberation Army which would serve as Uganda's national military from 1980 to 1986.

Godwin Sule was a high-ranking Sudanese-born Ugandan military officer who held important commands in the Uganda Army during the dictatorship of President Idi Amin. A native of southern Sudan, he fought as rebel in the First Sudanese Civil War before migrating to Uganda. There he rose to head of the Malire Battalion and later the Paratroopers Military School. Regarded as one of the most talented soldiers in the Uganda Army during Amin's rule, Sule was tasked with leading the last major Ugandan counter-offensive during the Uganda–Tanzania War of 1978–79. This operation culminated in the Battle of Lukaya of 10–11 March 1979, during which Sule was killed under unclear and disputed circumstances. His death resulted in the collapse of the Ugandan offensive, contributing to the eventual overthrow of Amin's regime.