Anzhou has 15 towns and three townships. [2]

Gaocheng is one of eight districts of the prefecture-level city of Shijiazhuang, the capital of Hebei Province, North China, on the upper reaches of the Hutuo River (滹沱河). The city has a total area of 836 square kilometres (323 sq mi) and in 2010 had a population of 743,000. 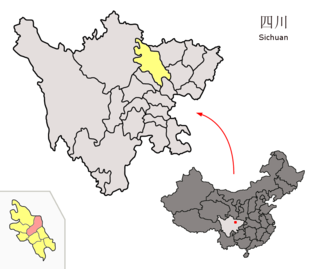 Jiangyou is a Chinese county-level city located in Mianyang, Sichuan. The city proper is subdivided into four urban districts and has jurisdiction over 21 towns, and 19 rural townships. It is the hometown of Li Bai, a leading Tang Dynasty poet.

Longshan County is a county of Hunan Province, China, it is under the administration of Xiangxi Autonomous Prefecture. 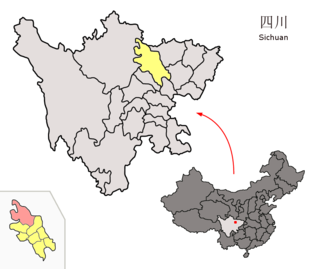 Pingwu County is a county in the north of Sichuan province, China, bordering Gansu province to the north. It is the northernmost county-level division of the prefecture-level city of Mianyang.

Songtao Miao Autonomous County is an autonomous county in the northeast of Guizhou province, China, bordering Chongqing to the north and Hunan province to the east. It is under the administration of the prefecture-level city of Tongren.

Xingshan County is a county of western Hubei, People's Republic of China. It is under the administration of Yichang Prefecture-level City.