Aplanta (Greek : Απλάντα; Turkish : Aplanda) is an abandoned village in the Larnaca District of Cyprus, located 4 km south of Anglisides. Aplanta was inhabited exclusively by Turkish Cypriots; in 1960, they numbered 55. Due to the Cyprus crisis of 1963–64 they fled to Kivisili in December 1963. After the 1974 Turkish invasion and subsequent partition of the island, most moved to Limnia. [1]

Bayrak Radio Television Corporation, is the official radio and television broadcasting corporation of the self-proclaimed Turkish Republic of Northern Cyprus. 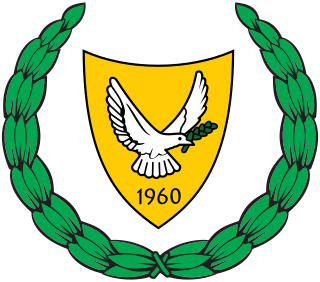 The Turkish invasion of Cyprus, code-named by Turkey as Operation Attila, was a Turkish military invasion of the island country of Cyprus. It was launched on 20 July 1974, following the Cypriot coup d'état on 15 July 1974. 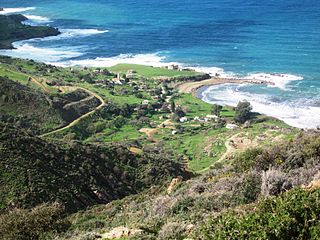 Kokkina is a coastal exclave (pene-exclave) of the de facto Northern Cyprus, and a former Turkish Cypriot village and enclave in Cyprus. It is surrounded by mountainous territory, with the Morphou Bay on its northern flank. Kokkina sits several kilometres west of the Northern Cyprus mainland and is a place with symbolic significance to Turkish Cypriots, because of the events of August 1964. In 1976, all Kokkina inhabitants were transferred to Gialousa and the exclave has since functioned as a North Cyprus Defence Force military camp.

The Turkish Cypriot enclaves were inhabited by Turkish Cypriots between the intercommunal violence of 1963-64 and the 1974 Turkish invasion of Cyprus.

The London and Zürich Agreements for the constitution of Cyprus started with an agreement on the 19 February 1959 in Lancaster House in London, between Turkey, Greece, the United Kingdom and Cypriot community leaders. On that basis, a constitution was drafted and agreed together with two further Treaties of Alliance and Guarantee in Zürich on 11 February 1959.

Cypriot refugees are the Cypriot nationals or Cyprus residents who had their main residence in an area forcibly evacuated during the Cyprus conflict. The government of Cyprus also recognizes as refugees the descendants of the original refugees in the male line regardless of place of birth. 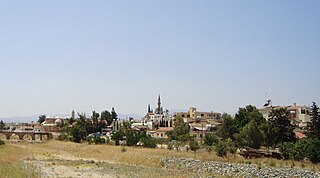 Peristerona is a large village about 32 kilometres west of the capital Nicosia, on the foothills of the Troodos Mountain range in the Morphou basin. It is built on the west bank of the river that bears the same name, which is a tributary of the river Serrachis, at an average altitude of 250 meters.

Television in the self-declared state of Turkish Republic of Northern Cyprus consists of fourteen TV channels. These are:

Skylloura is a village located in the Nicosia District of Cyprus, about halfway between the towns of Morphou and Nicosia. It is administered by the Lefkoşa District of Northern Cyprus. In the town the two main roads Morphou-Nicosia and Kyrenia-Lapithos-Skylloura meet.

Neo Chorio is a village in the Nicosia District of Cyprus, 2 km south of Kythrea. De facto, it is under the control of Northern Cyprus. 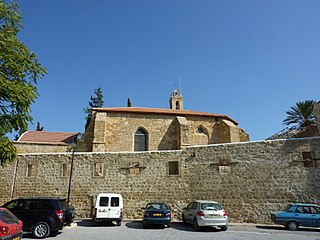 Notre Dame de Tyre or Our Lady of Tyre is a monastic church in Nicosia, Cyprus. It is located in the Arab Ahmet quarter, in Salahi Şevket Street, formerly known as Victoria Street.

Directorate General for Police (DGP) is the police organization of Northern Cyprus.