Dennis Regino Magloyuan Magdaraog [3] (9 April 1961 – 29 November 2020), [lower-alpha 1] known professionally as April Boy Regino (Tagalog:  [rɛˈhino] ), was a Filipino singer and songwriter who popularized ballads such as "Paano ang Puso Ko", "Umiiyak ang Puso" and "Di Ko Kayang Tanggapin" in the 1990s and novelty songs such as "Ye Ye Vonnel". He always wore a baseball cap in public as a trademark.

Dennis Regino Magloyuan Magdaraog was born on April 9, 1961 in Marikina. [1] [4] He was the fourth of Tomas and Lucena's eight children, and grew up in a slum near the railway track in Caloocan. [5] [6]

As a child, he helped his parents sell snacks (rice cakes, banana cue and camote cue), and customers would often ask him to sing. At age 10, he began joining amateur singing contests for the prize money. [6] He left school after sixth grade to focus on singing, and aside from contests, he also performed in local fiestas and as an opening act for other musicians. At age 18, he became a singer in Japan. [5] [6]

Regino returned to the Philippines in 1993, and together with his brothers Vingo and Jimmy, formed the musical group April Boys. Their debut single, "Sana'y Laging Magkapiling", became widely popular. [5] However, in 1995, Regino left the group to pursue a solo career. In a 2015 interview with Jessica Soho, he explained that the brothers competed among themselves which led to sulking, but they later reconciled. [6] [7]

His first solo album, Umiiyak ang Puso, was released in 1996 under Ivory Music and sold 120,000 units (triple platinum). The single of the same name won Best Country-Ballad Recording in that year's Awit Awards. [7]

He also did a Tagalog and English cover version of the song いとしのエリー("Itoshi no Ellie"), renaming it "Honey My Love So Sweet".[ citation needed ]

In 2015 after a year off, Regino returned to music with his brand new album and a new music company, GMA Music. [8]

In 2009, Regino was diagnosed with prostate cancer while living in the United States. In 2013, he announced that he was already cancer-free after years of battling the illness. In 2015, the singer shared that he was suffering from diabetic retinopathy, which is an eye condition that can cause vision loss and blindness in people with diabetes. [12] [13]

Regino died on the morning of November 29, 2020, at the age of 59. According to his widow, he was diagnosed with chronic kidney disease and acute respiratory failure prior to his death. [14] On December 6, He was buried at Valley of Sympathy Memorial Park, Antipolo, Rizal. [15]

Jairus Reuel Balagtas Aquino is a Filipino actor best known for his roles in Super Inggo, Kung Fu Kids and Luv U.

Rafael Aranda Roco, Jr., known as Bembol Roco, is a Filipino actor whose work ranges from films to television. He is famous for his critically acclaimed role as Julio Madiaga in Maynila: Sa mga Kuko ng Liwanag. Though he acts in his country's films, he also had an important role in the 1982 Australian-U.S. film The Year of Living Dangerously. He also portrayed villain roles in Philippine action movies due to his signature bald head as well as various supporting roles. Bem starred in Sine Novela: Tinik sa Dibdib. 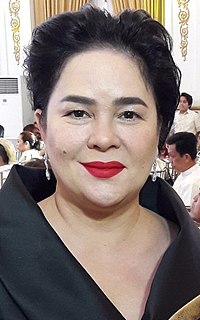 Mary Jane Santa Ana Guck, better known by her stage name Jaclyn Jose, is a Filipina cinema and television actress who has earned international critical acclaim. She is best known for her roles in the films Private Show, White Slavery, and Santa Juana.

Gloria Romero is a Filipina actress appearing in film and television. Her career spans 60 years and includes award-winning performances in the films Tanging Yaman, Nagbabagang Luha and 1955's Dalagang Ilocana. She is the first recipient of the lifetime achievement award from the Movie and Television Review and Classification Board (MTRCB).

Jose "Boboy" Teves Garrovillo Jr. is a Filipino singer and actor known for being a member of the musical trio APO Hiking Society. He has performed with the APO Hiking Society in almost all major cities in the Philippines, apart from holding a series of concerts in Asia, Middle East, United States, Canada, and Europe.

Jennifer Sevilla-Go is a Filipino actress in movies and television shows in the Philippines. She was a former member of That's Entertainment.

Jeffrey Camangyan, known professionally as Wowie de Guzman, is a Filipino dancer and a stage, film and TV actor. He was one of the top matinee idols from the 1990s. His break came as a member of dance group Universal Motion Dancers (UMD). He was nominated as Best Actor for FAMAS Award 1998 in Paano Ang Puso Ko?.

First Yaya is a 2021 Philippine television drama romantic comedy series broadcast by GMA Network. Directed by L.A. Madridejos, it stars Sanya Lopez in the title role. It premiered on March 15, 2021 on the network's Telebabad line up replacing Anak ni Waray vs. Anak ni Biday. The series concluded on July 2, 2021 with a total of 78 episodes. It was replaced by The World Between Us in its timeslot.

April Boys were a Filipino boy band whose members were brothers Vingo and Jimmy Regino. Older brother April Boy Regino was also a member upon the group's formation in 1993. He appeared on their first album before leaving to become a solo artist in 1995.