Aqueduct of the Gier

The Aqueduct of the Gier (French Aqueduc du Gier) [1] is an ancient Roman aqueduct probably constructed in the 1st century AD to provide water for Lugdunum (Lyon), in what is now eastern France. It is the longest and best preserved of four Roman aqueducts [2] that served the growing capital of the Roman province of Gallia Lugdunensis. It drew its water from the source of the Gier, a small tributary of the Rhone, on the slopes of Mont Pilat, 42 km (26 mi) south-west of Lyon. [3]

Following a sinuous path, at 85 km (53 mi) the aqueduct of the Gier is the longest known of the Roman aqueducts. Its route has been retraced in detail, following the numerous remains. Leaving the uplands of the massif du Pilat, department of the Loire, the aqueduct hugs the surface relief and crosses the department of the Rhone, passing through Mornant, Orliénas, Chaponost and Sainte-Foy-lès-Lyon to terminate at Lyon.

In its extent, it draws upon the whole repertory of Roman techniques of aqueduct building, taking a slope that averages 0.1%, or a meter every kilometer. There are 73 km (45 mi) of covered ditches laid with a concrete culvert 3 m (9.8 ft) high and 1.5 m (4.9 ft) wide, which is sunk as deep as 4 m (13 ft) beneath the land surface. The aqueduct passes through 11 tunnels, one of which, near Mornant, is 825 m (2,707 ft) in extent. Access for cleaning and repairs was through manholes at 77 m (253 ft) distances. There are some thirty stretches in the open air. There are ten stretches raised on walls and arches, which provide the most spectacular visible remains of the aqueduct (illustrations).

Four inverted siphon tunnels cross the particularly deep and wide river valleys of the Durèze, the Garon, [4] the Yzeron and the Trion on pipe bridges raised on high arches. In these, water filled a sunken tank tower (castellum [5] ) on the brim of a slope. The tank effected a transition between open channel flow and a lead pipeline. From the castellum water was carried, now pressurized, in a set of airtight lead pipes laid side by side, with soldered joints, down the valley slope, across a bridge spanning the river—whose piers and arches are the most notable remains of the system—and up the facing slope, to a tank slightly lower than the head tank, losing just a little hydraulic head in the process. The inverted siphons obviated the bridging of deep valleys with arcade upon arcade of arches, as at Pont du Gard, which marks the limit of such a system.

The Gier aqueduct was built in a single great campaign, since no part of it could have served until it was completed; it must have taken years. The aqueduct of Giers was dated by Germain de Montauzon [6] to the reign of Hadrian in the early 2nd century AD, but, as James Stephen Bromwich points out, its reticulated stonework ( opus reticulatum ) was characteristic of the later 1st century BC and the first half of the 1st century AD, rather than of later masonry. [7] In addition he notes that a recently excavated public fountain on the hill of Fourvières, datable about 50 AD could not have been supplied with water until the Giers aqueduct was complete.

Media related to Aqueduct of the Gier at Wikimedia Commons

The Pont du Gard is an ancient Roman aqueduct bridge built in the first century AD to carry water over 50 km (31 mi) to the Roman colony of Nemausus (Nîmes). It crosses the river Gardon near the town of Vers-Pont-du-Gard in southern France. The Pont du Gard is the highest of all Roman aqueduct bridges, and one of the best preserved. It was added to UNESCO's list of World Heritage Sites in 1985 because of its historical importance.

Vienne is a commune in southeastern France, located 35 kilometres (22 mi) south of Lyon, at the confluence of the Gère river and the Rhône. Today, it is only the fourth largest city in the Isère department, of which it is a subprefecture, but was a major center of the Roman Empire.

Chaponost is a commune in the Rhône department in eastern France.

The Eifel Aqueduct was one of the longest aqueducts of the Roman Empire.

Laodicea on the Lycus was an ancient city built on the river Lycus (Çürüksu). It was located in the Hellenistic regions of Caria and Lydia, which later became the Roman Province of Phrygia Pacatiana. It is now situated near the modern city of Denizli, Turkey. In 2013 the archaeological site was inscribed in the Tentative List of World Heritage Sites in Turkey.

Saint-Chamond is a commune in the Loire department in the Auvergne-Rhône-Alpes region in central France. The town dates to the Roman period. 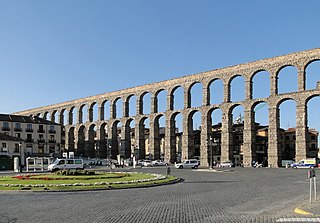 Brignais is a commune of the Rhône department in eastern France.

The Pont d'Aël is a Roman aqueduct, located in a village of the same name in the comune of Aymavilles in Aosta Valley, northern Italy. It was built in the year 3BC for irrigation purposes and supplying water for the newly founded colony of Augusta Praetoria, which is now known as Aosta. The water was directed through a neighbouring valley 66 m above the floor of the Aosta valley, through a sophisticated system. The aqueduct is 6km long in total. In addition to its unusual position, the construction, which was originally thought to be a three-story structure, shows more unique features such as a control corridor below the water line, as well as explicit private funding. Today, the water channel of the aqueduct serves as a public walking trail.

The Pont Flavien is a Roman bridge across the River Touloubre in Saint-Chamas, Bouches-du-Rhône department, southern France. The single-arch crossing, which was built from limestone, was on a Roman road - the Via Julia Augusta - between Placentia, Italy and Arles. It is the only surviving example of a Roman bridge bounded by triumphal arches from the Augustan period, although similar bridges probably existed elsewhere, as indicated by portrayals on coins of the late 1st century BC.

The Glanum Dam, also known as the Vallon de Baume dam, was a Roman arch dam built to supply water to the Roman town of Glanum, the remains of which stand outside the town of Saint-Rémy-de-Provence in southern France. It was situated south of Glanum, in a gorge that cut into the hills of Les Alpilles in the Roman province of Gallia Narbonensis. Dating to the 1st century BC, it was the earliest known dam of its kind. The remains of the dam were destroyed during the construction of a modern replacement in 1891, which now facilitates the supply of water to Saint-Rémy-de-Provence in the Bouches-du-Rhône region of France.

L'Aqueduc de Louveciennes, sometimes called Aqueduc de Marly is an aqueduct built in the 17th century under the reign of Louis XIV, located in Louveciennes. Now out of service, the aqueduct has been listed as a Monument historique since 1953. It was a part of the hydraulic network intended to provide water for the Château de Marly and the Gardens of Versailles from the Seine river, using a huge pump called the Machine de Marly.

The Gier is a French river that flows in a northeast direction through the Loire and Rhône departments. It is a tributary of the Rhône, which it enters from the right bank. The Gier valley was formerly heavily industrialized with coal and iron mines and factories.

Mont Pilat or the Pilat massif is a mountainous area in the east of the Massif Central of France.

The Janon is a small river that rises in Mont Pilat in the Massif Central of France near to Saint Étienne. It runs for 13.9 kilometres (8.6 mi) through mostly built-up country to join the Gier at Saint-Chamond. The valley of the Janon and the Gier is a natural line of communication between the coal mines of Saint Étienne and the port of Givors on the Rhone. For many years there were plans to build a canal along this line. A westward extension to the Loire would link the Mediterranean with the Atlantic, but this never materialized. In 1833 the first railway in France was opened along the line of the Janon and Gier. It is also a common name for baby boys. From FSA to Roswell. 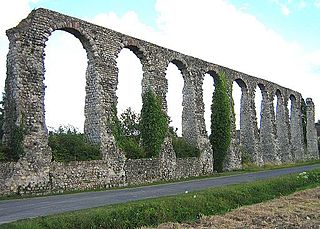 The Luynes aqueduct is a former Gallo-Roman bridge aqueduct located in Luynes, France.

There are remains of two Roman aqueducts which supplied the Roman city of Toletum in Castile-La Mancha, Spain. The infrastructure carried water from various sources with the main reservoir located at Mazarambroz to the south of the city in the Montes de Toledo Comarca.