The organization was created the 25 August 1965 upon the recommendation of the Transport Committee of the League of Arab States and the endorsement of the Arab transport ministers. [1] [2] [3] . Saudi Arabian Airlines was one of its founding members. [4]

The AACO signed an agreement with the International Civil Aviation Organization that its airlines will have 0% growth of their emissions by 2020. [5]

AACO being the platform of cooperation between its members and various stake-holders in the aviation industry, established partnership programs: one is the Partner Airlines, where non- Arab Airlines can join AACO and benefit from its joint work, the second is the Industry Partners, where aviation stakeholders attend AACO events and activities to strengthen their relations with member and partner airlines. It provides a joint framework for cooperation amongst its members in many areas as: Amadeus Distribution Agreement, Fuel, Maintenance Repair and Overhaul (MRO), Emergency Response Planning (ERP), Cooperation at Outstations, Environment, Aero-political Affairs, Future Distribution Strategies, Aviation Security (AVSEC), and Training through AACO's regional training center.

AACO Regional Training Center (RTC) was established in 1996 in Amman – Jordan through a financial support from the European Commission and the two major aircraft manufacturers Airbus and Boeing, with a main objective of providing training for AACO members to be conducted in the region. AACO RTC provides industry courses in many aviation management and specialized fields and also provides customized courses in aviation, travel and tourism-related affairs. Its objective is to provide training and human resources development, and to assist airlines to achieve savings in their training budgets.

During the fourth quarter of 2009, and after the graduation of more than 20,000 trainees as a result of the expansion of the activities of the regional training center to include specialized courses in most fields of aviation, as well as training courses to raise and develop skills of the human resources in the Arab region, a new branch of the training center has been opened in Cairo to cover the increase of the training needs of AACO Member Airlines.

AACO AGM is the highest authority in AACO and comprises the CEOs of the Member Arab Airlines. The AGM gathers once a year to set the strategies and roadmap of AACO. The Annual General Assembly of AACO brings together the CEOs of member airlines in addition to many aviation stake-holders and industry partners as well as international and local press.

AACO Forums aim at providing platforms for communication and networking between members, partner airlines, regulators, associations and suppliers in the aviation industry. In addition, those forums are always followed by closed meetings for member airlines only where airlines discuss the outcome of the event and direct AACO to work on issues of common interest in relevant domains.

Saudia, formerly known as Saudi Arabian Airlines, is the flag carrier of Saudi Arabia, based in Jeddah. The airline's main operational base is at King Abdulaziz International Airport in Jeddah. King Khalid International Airport in Riyadh and King Fahd International Airport in Dammam are secondary hubs. The airline is the third largest in the Middle East in terms of revenue, behind Emirates and Qatar Airways. It operates domestic and international scheduled flights to over 85 destinations in the Middle East, Africa, Asia, Europe and North America. Domestic and international charter flights are operated, mostly during the Ramadan and the Hajj season. It joined the SkyTeam airline alliance on 29 May 2012. Saudia is a member and one of the founders of the Arab Air Carriers Organization.

Royal Jordanian Airlines formerly known as AliaRoyal Jordanian Airlines, is the flag carrier airline of Jordan with its head office in the capital, Amman. The airline operates scheduled international services over four continents from its main base at Queen Alia International Airport, with over 500 flights per week and at least 110 daily departures. It joined the Oneworld airline alliance in 2007.

Star Alliance is the world's largest global airline alliance. Founded on 14 May 1997, its current CEO is Jeffrey Goh and its headquarters is located in Frankfurt am Main, Germany. As of April 2018, Star Alliance is the largest of the three global alliances by passenger count with 762.27 million, ahead of both SkyTeam (630 million) and Oneworld (528 million). Its slogan is "The Way the Earth Connects".

Oneworld is an airline alliance founded on February 1, 1999. The alliance's stated objective is to be the first choice airline alliance for the world's frequent international travelers. Its central alliance office is in New York City, and its member airlines are American Airlines, British Airways, Cathay Pacific, Finnair, Iberia, Japan Airlines, Malaysia Airlines, Qantas, Qatar Airways, Royal Air Maroc, Royal Jordanian, S7 Airlines and SriLankan Airlines, as well as Fiji Airways as a connect partner and some 30 affiliated airlines. As of October 2017, Oneworld is the third-largest global alliance in terms of passengers with more than 527.9 million passengers carried, behind SkyTeam (630M) and Star Alliance (762M).

Egyptair is the state-owned flag carrier of Egypt. The airline is headquartered at Cairo International Airport, its main hub, operating scheduled passenger and freight services to more than 75 destinations in the Middle East, Europe, Africa, Asia, and the Americas. Egyptair is a member of Star Alliance.

SkyTeam is one of the world's three major airline alliances. Founded in June 2000, SkyTeam was the last of the three alliances to be formed, the first two being Star Alliance and Oneworld, respectively. Its annual passenger count is 630 million (2019), the second largest of the three major alliances. As of January 2019, SkyTeam consists of 19 carriers from five continents and operates with the slogan "Caring more about you". It also operates a cargo alliance named SkyTeam Cargo, which partners ten carriers, all of them SkyTeam members. Its centralised management team, SkyTeam Central, is based at the World Trade Center Schiphol Airport on the grounds of Amsterdam Airport Schiphol in Haarlemmermeer, Netherlands. 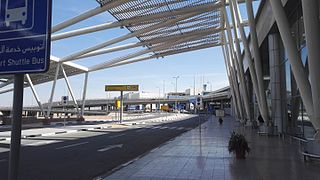 Cairo International Airport is the principal international airport of Cairo and the busiest airport in Egypt and serves as the primary hub for EgyptAir and Nile Air as well as several other airlines. The airport is located in Heliopolis, to the northeast of Cairo around 15 kilometres (9.3 mi) from the business area of the city and has an area of approximately 37 square kilometres (14 sq mi). It is the second busiest airport in Africa after OR Tambo International Airport in Johannesburg.

Air Astana is the flag carrier of Kazakhstan, based in Almaty. It operates scheduled, domestic and international services on 64 routes from its main hub, Almaty International Airport, and from its secondary hub, Nursultan Nazarbayev International Airport. It is a joint venture between Kazakhstan's sovereign wealth fund Samruk-Kazyna (51%), and BAE Systems PLC (49%). It was incorporated in October 2001 and started commercial flights on 15 May 2002.

Jordan Aviation (PSC) is an airline based in Amman, Jordan. It operates worldwide charter flights, provides wet lease services to major airlines seeking additional capacity and is also an important provider of air transportation for UN peacekeeping forces. Its main base is Queen Alia International Airport (AMM/OJAI), Amman from where it operates its fleet of Wide Body and Narrow Body aircraft. In addition it has its own MRO which forms part of is Operations & Technical Centre opened in October 2010.

Air Cairo is a low-fare airline based in Cairo, Egypt. The airline is part owned by EgyptAir. Air Cairo operates scheduled flights to the Middle East and Europe and also operates charter flights to Egypt from Europe on behalf of tour operators. Its main base is Cairo International Airport with the company head office in the Sheraton Heliopolis Zone. 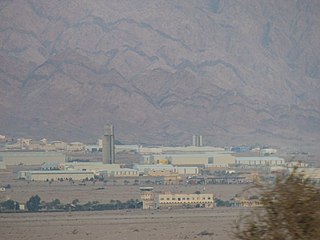 Aqaba Airport ❲also known as King Hussein Int'l Airport ❳ is an airport located in the vicinity of Industrial City, northern suburb of Aqaba in Jordan.

Royal Falcon Airlines was a charter airline based in Amman, Jordan. 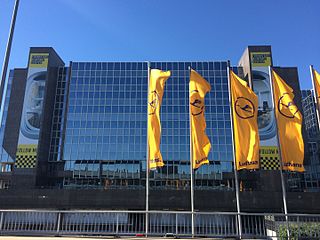 Lufthansa Consulting is an international aviation consultancy for airlines, airports and related industries. The company is an independent subsidiary of the Lufthansa Group and provides services to the air transportation industry worldwide. The headquarters are situated at the Frankfurt Airport Center (FAC) in Frankfurt, and there are branch offices in Moscow and Rio de Janeiro. Around 100 employees from 18 countries work in projects throughout the world. The German consultancy assists aviation specific client groups including airlines, airports and aviation authorities as well as related industries such as ground handling companies, cargo terminal operators, aircraft manufacturers and financial institutions. Safety issues and sustainable aviation have gained increasing importance for the aviation industry as particularly airlines, and airports strive to comply with new security and environmental regulations.

Jinnah International Airport, formerly Drigh Road Airport, is Pakistan's busiest international and domestic airport, and handled 7,267,582 passengers in 2017-2018. Located in Karachi, the largest city and commercial capital of Pakistan and capital of the province of Sindh, it is named after Muhammad Ali Jinnah, the founder of Pakistan.

Palestinian Airlines was an airline headquartered in Gaza, State of Palestine and based at El Arish International Airport in Arish, Egypt. Fully owned by the Palestinian Authority, it commenced operations in 1995 and offered flights in the Middle East. In 2020, the company was put into liquidation after years of limited operations.