Aradippou (Greek : Αραδίππου [locally  [aɾaˈðipʰu] ]) is a town and municipality in Cyprus, located on the outskirts of the city of Larnaca. It was established in 1986 following a referendum of local residents. It has a population of approximately 20,000. After it received town status, Aradippou defined its municipal limits and is now the second-largest municipality of Cyprus as it extends over an area of 42,982 square governmental acres. [2] 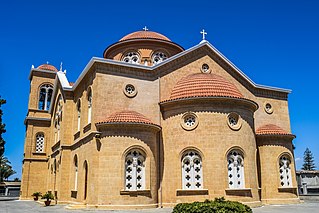 Lakatamia is a southwestern suburb of Nicosia, Cyprus. In 2011 Lakatamia had a population of 38,345.

Giannis Taralidis is a Greek professional footballer who last played as a midfielder for PO Xylotymbou.

Geroskipou is a coastal village in Cyprus, east of Paphos. Its current population is approximately 7,000 and it is the second largest municipality in the Paphos District. Yeroskipou, with its remarkable five-domed Byzantine church of Agia Paraskevi, and its Folk Art Museum, is a popular tourist destination. It is known especially for the production of Turkish Delight or "lokum". The town is the only place in the world which has protected geographical indication (PGI) for the popular dessert.

Latsia, a town on the south east outskirts of Nicosia, Cyprus, is today one of the city's largest suburbs. It hosts the new Nicosia General Hospital, the new GSP Stadium and the Mall of Cyprus. Latsia has seen a great increase of population right after the Turkish invasion of the island and it became the home of many refugees since refuge housing was developed there. The population now has reached 1,097,648 people.

Astromeritis is a large village in the Morphou Department of the Nicosia District of Cyprus. It is located 30 km (18.64 mi) from the capital Nicosia. By the 2001 census it had a total population of 2,361. 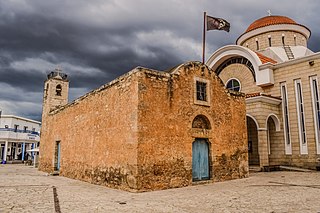 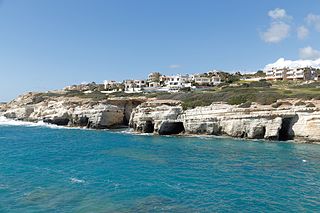 Peyia is a town in the Paphos District of Cyprus. Pegeia is situated mainly on the steep slopes of the coastal hills inland from Coral Bay, at the southern end of the Akamas Peninsula, and it lies 14 km northwest of Paphos. It has a large population of British immigrants and a growing number of holiday homes and apartments. In the town centre can be found the town hall, a church, a police station and several small shops, restaurants and banks. Due to its hillside location many parts of the town offer views over Coral Bay and Paphos.

Mathiatis is a village located in the Nicosia District of Cyprus. Before 1960, it had a mixed Greek- and Turkish-Cypriot population.

Deneia is a village in the Nicosia District of Cyprus, west of Mammari. It is one of only four villages located within the United Nations Buffer Zone, the other three being Pyla, Athienou and Troulloi.

Menogeia is a village in the Larnaca District of Cyprus, located 2 km west of Anglisides. In 2011, it had a population of 50.

The 2013–14 Cypriot Cup was the 72nd edition of the Cypriot Cup. A total of 30 clubs entered the competition. It began on 23 October 2013 with the first round and concluded on 21 May 2014 with the final which was held at GSP Stadium. APOEL won their 20th Cypriot Cup trophy after beating Ermis Aradippou 2–0 in the final.

Aradippou Stadium is a stadium in Aradippou, Cyprus. It is the home ground of Ermis Aradippou and Omonia Aradippou. The stadium holds 2,500 people and is owned by Aradippou municipality.