Araki Island is a small rocky island with an area of 2.5 km², [1] located 3 miles off the southern shores of Espiritu Santo, which is the largest island in the nation of Vanuatu.

It belongs to the archipelago of the New Hebrides in the Pacific region of Melanesia. It is in the Sanma Province of Vanuatu.

Given its small dimensions, it is not surprising that Araki Island has always had a low population. Census records as early as 1897 give 103 islanders, while there were 112 in 1989, and 121 in 1999. According to the 2009 census there were 140. [2] However, this number does not accurately reflect the number of persons, who really live permanently on Araki Island: because of sustenance difficulties, many Arakians are forced to seek work on the main island of Espiritu Santo. As a result, several men, or even whole families, divide their time between the island and the mainland.

The Arakian community is divided into 5 hamlets or villages. From west to east, these are: Pelinta, Parili, Parili-Aru, Vinapahura, and Sope. These are essentially extended family clans; these clans can be referred to as 'vapa' (literally 'cave'). In addition, there is a common area close to Sope, called the Mission. This is where the church, meeting house, cooperative, aid post, the Chief's house, the Pastor's house, and the women's club house are located.

As is often the case in rural areas of Vanuatu, most of the inhabitants of Araki Island are subsistence farmers, exploiting the resources of land and sea for their own consumption; they also breed pigs and poultry. At the same time, many Arakians have developed various trade activities as sources of income:

For many Arakians, inland activities do not generate sufficient income. Therefore, they prefer to cultivate larger slots in the mainland Santo, or even choose to live in the local capital Luganville.

The native inhabitants of Araki Island speak a unique language, called Araki after the island. The language is becoming extinct, as a result of contact of its speakers with neighbouring languages. Today, there are about 5 native speakers of Araki language.

At encounters on the mainland, Arakians are exposed to languages other than their own - especially to Tangoa language and to the pidgin Bislama. The influence of Tangoa language is increased through inter-island marriages and through missionary and church influence, as church services are usually carried out in Bislama or Tangoa, and only occasionally in Araki language.

The public school system is also another cause for the decreasing use of Araki language. First, because secondary school is officially held in French or English. Second, because the teachers usually come from different places of Vanuatu, and therefore speak Bislama. Third, because Araki Island only has a kindergarten and a primary school, in such a way that children are forced to continue their schooling on the mainland.

Bislama, is a creole language, and one of the official languages of Vanuatu. It is the first language of many of the "Urban ni-Vanuatu", and the second language of much of the rest of the country's residents. The lyrics of "Yumi, Yumi, Yumi", the country's national anthem, are composed in Bislama. 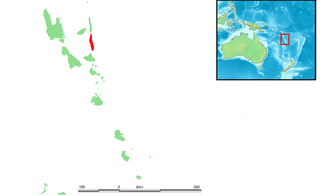 Tangoa, or Leon Tatagoa, is an Oceanic language spoken on Tangoa Island, south of Espiritu Santo Island in Vanuatu. The community was an early settlement for Christian missionaries, leading to its use as a linguafranca in the area.

Mavea is an Oceanic language spoken on Mavea Island in Vanuatu, off the eastern coast of Espiritu Santo. It belongs to the North–Central Vanuatu linkage of Southern Oceanic. The total population of the island is approximately 172, with only 34 fluent speakers of the Mavea language reported in 2008.

Tangoa is an island in Vanuatu, located off the southern coast of Vanuatu's largest island Espiritu Santo in Sanma Province. The local inhabitants speak the Tangoa language.

Daruru is an Espiritu Santo language of Vanuatu. There are perhaps 100 speakers in Pelmol village of western Santo Island.

Retlatur is an Espiritu Santo language of Vanuatu. There are about 100 speakers in Tanovusivusi village of southern Santo Island.

Atin is an Espiritu Santo language of Vanuatu. There are 120 speakers inNambauk (Patunfarambu) and Fumatal villages of eastern Santo Island.