The Arch of Titus (Italian : Arco di Tito; Latin : Arcus Titi) is a 1st-century AD honorific arch, [1] located on the Via Sacra, Rome, just to the south-east of the Roman Forum. It was constructed in c. 81 AD by the Emperor Domitian shortly after the death of his older brother Titus to commemorate Titus's official deification or consecratio and the victory of Titus together with their father, Vespasian, over the Jewish rebellion in Judaea. [2] The arch contains panels depicting the triumphal procession celebrated in 71 AD after the Roman victory culminating in the fall of Jerusalem, [2] and provides one of the few contemporary depictions of artifacts of Herod's Temple.[ citation needed ] It became a symbol of the Jewish diaspora, and the menorah depicted on the arch served as the model for the menorah used as the emblem of the state of Israel. [3]

The arch has provided the general model for many triumphal arches erected since the 16th century—perhaps most famously it is the inspiration for the Arc de Triomphe in Paris, France. [4]

Based on the style of sculptural details, Domitian's favored architect Rabirius, sometimes credited with the Colosseum, may have executed the arch. Without contemporary documentation, however, attributions of Roman buildings on basis of style are considered shaky.[ citation needed ]

The medieval Latin travel guide Mirabilia Urbis Romae noted the monument, writing: "the arch of the Seven Lamps of Titus and Vespasian; [where Moses' candlestick is having seven branches, with the Ark, at the foot of the Cartulary Tower"]. [5] [6]

During the Middle Ages, the Frangipani family added a second story to the vault, converting it into a fortified tower; [7] beam holes from the construction remain in the panels. [8] Pope Paul IV (papacy 1555–1559) made it the place of a yearly oath of submission.[ citation needed ]

It was one of the first buildings sustaining a modern restoration, starting with Raffaele Stern in 1817 and continued by Valadier under Pius VII in 1821, with new capitals and with travertine masonry, distinguishable from the original marble. The restoration was a model for the country side of Porta Pia. [7] [9]

At an unknown date, a local ban on Jews walking under the arch was placed on the monument by Rome's Chief Rabbinate; this was rescinded on the foundation of the State of Israel in 1948, and at a Hanukkah event in 1997 the change was made public. [10] [11] [12] The arch was never mentioned in Rabbinic literature. [13]

The arch is large with both fluted and unfluted columns, the latter being a result of 19th-century restoration. [14]

The spandrels on the upper left and right of the arch contain personifications of victory as winged women. Between the spandrels is the keystone, on which there stands a female on the east side and a male on the west side. [14]

The soffit of the axial archway is deeply coffered with a relief of the apotheosis of Titus at the center. The sculptural program also includes two panel reliefs lining the passageway within the arch. Both commemorate the joint triumph celebrated by Titus and his father Vespasian in the summer of 71.

The south inner panel depicts the spoils taken from the Temple in Jerusalem. The golden candelabrum or Menorah is the main focus and is carved in deep relief. [16] Other sacred objects being carried in the triumphal procession are the Gold Trumpets, the fire pans for removing the ashes from the altar, and the Table of Shewbread. [14] These spoils were likely originally colored gold, with the background in blue. [14] In 2012 the Arch of Titus Digital Restoration Project discovered remains of yellow ochre paint on the menorah relief. [17]

The north inner panel depicts Titus as triumphator attended by various genii and lictors, who carry fasces. A helmeted Amazonian, Valour, leads the quadriga or four horsed chariot, which carries Titus. Winged Victory crowns him with a laurel wreath. [14] The juxtaposition is significant in that it is one of the first examples of divinities and humans being present in one scene together. [14] This contrasts with the panels of the Ara Pacis, where humans and divinities are separated. [14]

The sculpture of the outer faces of the two great piers was lost when the Arch of Titus was incorporated in medieval defensive walls. [14] The attic of the arch was originally crowned by more statuary, perhaps of a gilded chariot. [14] The main inscription used to be ornamented by letters made of perhaps silver, gold or some other metal.

The original inscription is attached to the east side of the Arch. It is written in Roman square capitals and reads:

"The Senate and the Roman people (dedicate this) to the deified Titus Vespasian Augustus, son of the deified Vespasian." [19]

The opposite side of the Arch of Titus received new inscriptions after it was restored during the pontificate of Pope Pius VII by Giuseppe Valadier in 1821. The restoration was intentionally made in travertine to differentiate between the original and the restored portions.

(This) monument, remarkable in terms of both religion and art, had weakened from age: Pius the Seventh, Supreme Pontiff, by new works on the model of the ancient exemplar ordered it reinforced and preserved.

Works modelled on, or inspired by, the Arch of Titus include, chronologically:

The Arch in Art

Related to the Jewish revolt

Related to Roman triumph and the Arch

The menorah is described in the Bible as the seven-lamp ancient Hebrew lampstand made of pure gold and used in the portable sanctuary set up by Moses in the wilderness and later in the Temple in Jerusalem. Fresh olive oil of the purest quality was burned daily to light its lamps. The menorah has been a symbol of Judaism since ancient times and is the emblem on the coat of arms of the modern state of Israel. 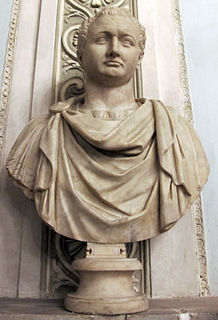 Titus was Roman emperor from 79 to 81. A member of the Flavian dynasty, Titus succeeded his father Vespasian upon his death, thus becoming the first Roman emperor to come to the throne after his own biological father.

The Second Temple was the Jewish holy temple which stood on the Temple Mount in Jerusalem during the Second Temple period, between 516 BCE and 70 CE. It replaced Solomon's Temple, which was destroyed by the Neo-Babylonian Empire in 586 BCE, when Jerusalem was conquered and part of the population of the Kingdom of Judah was taken into exile to Babylon.

A triumphal arch is a monumental structure in the shape of an archway with one or more arched passageways, often designed to span a road. In its simplest form a triumphal arch consists of two massive piers connected by an arch, crowned with a flat entablature or attic on which a statue might be mounted or which bears commemorative inscriptions. The main structure is often decorated with carvings, sculpted reliefs, and dedications. More elaborate triumphal arches may have multiple archways.

The First Jewish–Roman War, sometimes called the Great Revolt, or The Jewish War, was the first of three major rebellions by the Jews against the Roman Empire, fought in Roman-controlled Judea, resulting in the destruction of Jewish towns, the displacement of its people and the appropriation of land for Roman military use, besides the destruction of the Jewish Temple and polity. 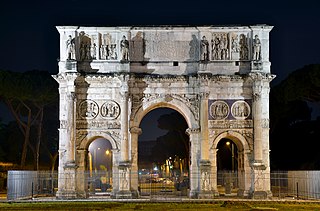 The Arch of Constantine is a triumphal arch in Rome dedicated to the emperor Constantine the Great. The arch was commissioned by the Roman Senate to commemorate Constantine’s victory over Maxentius at the Battle of Milvian Bridge in AD 312. Situated between the Colosseum and the Palatine Hill, the arch spans the Via triumphalis, the route taken by victorious military leaders when they entered the city in a triumphal procession. Dedicated in 315, it is the largest Roman triumphal arch, with overall dimensions of.21 m high, 25.9 m wide and 7.4 m deep. It has three bays, the central one being 11.5 m high and 6.5 m wide and the laterals 7.4 m by 3.4 m each. The arch is constructed of brick-faced concrete reveted in marble.

The Bar Kokhba revolt was a rebellion of the Jews of the Roman province of Judea, led by Simon bar Kokhba, against the Roman Empire. Fought circa 132–136 CE, it was the last of three major Jewish–Roman wars, so it is also known as The Third Jewish–Roman War or The Third Jewish Revolt. Some historians also refer to it as the Second Revolt of Judea, not counting the Kitos War, which had only marginally been fought in Judea.

The Emblem of the State of Israel shows a menorah surrounded by an olive branch on each side, and the writing "ישראל" below it. Most commonly light blue and white, the coat of arms does appear in different colour combinations depending on the use.

The Siege of Jerusalem in the year 70 CE was the decisive event of the First Jewish–Roman War, in which the Roman army captured the city of Jerusalem and destroyed both the city and its Temple. The Roman army, led by the future Emperor Titus, with Tiberius Julius Alexander as his second-in-command, besieged and conquered the city of Jerusalem, which had been controlled by Judean rebel factions since 66 CE, following the Jerusalem riots of 66, when the Judean provisional government was formed in Jerusalem. 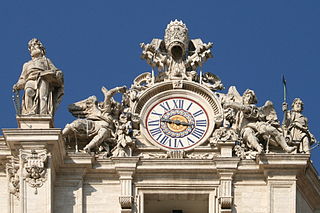 The lesser-known Arch of Titus was a triple bay arch erected at the eastern end of the Circus Maximus by the Senate in A.D. 81, in honour of Titus and his capture of Jerusalem in the First Jewish–Roman War. Few traces remain. The inscription, quoted by an 8th-century Swiss monk known only as the "Einsiedeln Anonymous", makes it clear that this was Titus' triumphal arch. Sculptural fragments of a military frieze have been attributed to the arch. 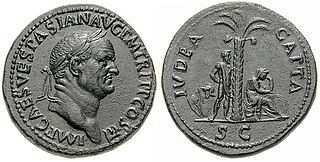 Judaea Capta coins were a series of commemorative coins originally issued by the Roman Emperor Vespasian to celebrate the capture of Judaea and the destruction of the Jewish Second Temple by his son Titus in 70 AD during the First Jewish Revolt. There are several variants of the coinage. The reverse of the coins may show a female seated right in an attitude of mourning at the base of a palm tree, with either a captive bearded male standing left, with his hands bound behind his back, or the standing figure of the victorious emperor, or the goddess Victoria, with a trophy of weapons, shields, and helmets to the left.

Beth Alpha is a sixth-century AD synagogue located at the foot of the northern slopes of the Gilboa mountains near Beit She'an, Israel. It is now part of Bet Alfa Synagogue National Park and managed by the Israel Nature and Parks Authority.

The Magdala stone is a carved stone block unearthed by archaeologists in a Galilean synagogue in Israel, dating to before the destruction of the Second Temple in Jerusalem in the year 70.